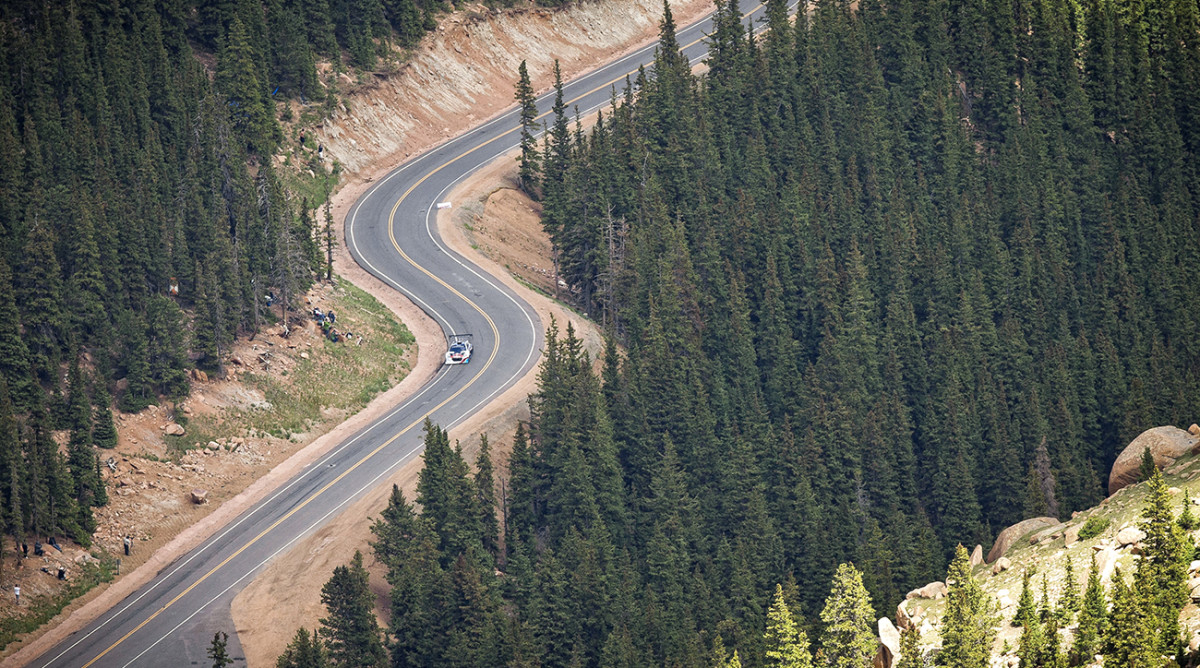 When lifelong motorcycle racer Carlin Dunne was a child, his grandfather gave him a plain red bandana handkerchief. As he started racing competitively at around 11 years old, he tucked the handkerchief into his leathers for every event. Over his career, he won the Baja 500 motorsport race twice and set multiple world speed records. Twenty-five years later, Dunne had carried the bandana through a mountain biking career, three world records and four victories at the Pikes Peak International Hill Climb, the second oldest motorsport race in the country (behind the Indianapolis 500) that ends at the summit of the 14,115-foot Colorado mountain.

In 2019, Dunne entered the Hill Climb again, to defend his title and attempt to break the new course record. It was on that race’s last turn, roughly 20 yards from the finish line, where Dunne fatally crashed his motorcycle last June.

His coroner’s report reads: “A red handkerchief lies on top of his chest.”

“I know exactly what happens in a trauma situation. The chaos. Your attention is to the patient. Crap gets lost,” says Dunne’s mother, Romie Gallardo. “But you know what? That red handkerchief never got lost. The first responders didn’t know what it meant, but they knew it meant something.”

Dunne was called the “King of the Mountain” for his wins at Pikes Peak. Before he crashed, his estimated 2019 time was 9:32, clocking in 12 seconds faster than the previous record. He knew the dangers of racing—his professional website proudly states, “Three world records, 27 broken bones.” In a 2016 interview with Sports Illustrated, Dunne described the seriousness of the mountain and his dedication to the race, claiming that its speed and turbulence make it crucial to keep focused.

“You have to be so on; any mistake can lead to you losing your life,” Dunne said. “You’re gambling with a lot, but it is calculated risk, not reckless abandon.”

Known as the “Race to the Clouds,” the Pikes Peak International Hill Climb course holds 156 turns over a 4,725-foot elevation gain. Annually, an estimated 30,000 people flock to the mountain to watch the race. Cascade, Colo., where the Highway begins, has a population of just 1,655. The City of Colorado Springs estimates that the average person takes one to three hours to drive the course, which operates as a tourist road every other day of the year. In 2015, Dunne broke the 10-minute motorcycle race barrier when he crossed the finish line in nine minutes and 52 seconds.

Kristina Reavis (my mother) was a flight nurse in June 2019, when she served on a medical team stationed on Pikes Peak specifically for the Hill Climb. When Dunne crashed in 2019, the company’s helicopter responded. Reavis says that it was impossible to access Dunne’s crash site from the helicopter, but the medical crew landed as close as possible and a race vehicle took them up the rest of the way.

After the crash, onlookers thought they saw Dunne’s arms moving. They thought he was giving the thumbs up, letting everyone know he was going to be okay. But his mom says that wasn’t him.

“His heart stopped in the helicopter,” she says. “His spirit had already left his body.”

This August, the 98th annual Hill Climb will run without motorcycles, a decision that was announced just weeks after Dunne’s death. Some believe that bikes will never be allowed back. Others advocate for increased safety measures and the reintroduction of the motorcycle race.

Faced with two cyclist deaths in four years and the loss of a reigning champion, race officials had to decide between safety and tradition going into 2020. Rennie Scaysbrook, last year’s motorcycle victor, says that the Hill Climb is “damned if they do, damned if they don’t,” regarding the decision to block motorcycles from participating.

The PPIHC released details of Dunne’s crash last year, which state that the motorcyclist highsided going into the last turn of the course. There were no mechanical issues with his bike.

“There is nothing they could have put up that would have prevented him from going off the road,” Gallardo says. “If they put up barriers or little walls or something, he would have slammed into it.”

Because the racecourse is on Pikes Peak Highway, which is on government land and, every other day of the year, operates as a tourist road, any sort of barrier put up by race officials would have to be taken down at the end of the day. Gallardo says it would be astronomically expensive and not feasible.

Crashes are far from rare at the Hill Climb. The race has led to seven deaths in its 98-year history, but Reavis says that both of the fatalities she witnessed on the mountain were motorcycle racers.

“I am not a motorcycle racer, but the people I have spoken to who do race love it. They love it beyond reason,” Reavis says. One of her former patients underwent 16 or 17 reconstructive surgeries after a motorcycle crash, but still went back to Pikes Peak once he was healed, she says.

The Hill Climb has not announced whether or not the motorcycle program will be reinstated in coming years. In a July 2019 statement, the PPIHC Board of Directors wrote, “PPIHC staff and board members will continue to track all metrics related to the annual race and make a final determination in late 2020 about whether or not the inclusion of a motorcycle program will take place in future years.”

Andrew Conrad, an acute care and general surgeon at Parkview Medical Center in Pueblo, Colo., says it’s important for the race to reevaluate and move forward with new safety measures.

Moving forward, however, Conrad hopes that motorcycles are allowed back in the race. He says that the motorcycle racing tradition is important and historical, and he would support it coming back with new safety measures.

For racers and community members who look forward to the motorcycle race each year, however, the decision is more challenging. No one has exact answers about how to reevaluate and move on following Dunne’s death.

Gallardo has been vocal about her opinion that the motorcycle program should continue at Pikes Peak for the past year. According to her, Dunne would not have wanted it to end. There are ways to increase motorcycle safety without scrapping the program, she says.

“I think the biggest and first change that could be implemented—and probably the easiest—is to cap the CC of the motorcycle,” she says. When Dunne crashed, he was riding a 1200cc. Chris Fillmore, who placed first in the Pikes Peak Lightweight division in 2019, raced a 450cc, Gallardo says.

Although Scaysbrook says he would not race Pikes Peak even if motorcycles were allowed this year, he still finds the race’s decision unfair.

“It’s awful,” he says. “We all knew the danger and obviously this is a reaction to Carlin’s accident. He and I were the fastest two guys there for the last couple of years and we both knew the dangers. No one goes to that place with eyes wide shut.”

The mountain called him back even after he crashed. Scaysbrook raced in the Hill Climb again in 2017 and 2018 before winning in 2019. He says that the race’s decision to block motorcycles in 2020 is no surprise.

“We got told every morning of practice just as the sun was coming up,” he says. “They would say, ‘Don’t crash.’ and ‘Don’t crash because if someone gets hurt or worse this whole thing is gonna stop.’”

According to Scaysbrook, event officials were very aware of the dangers of motorcycle racing. After hearing warnings not to crash at every practice, he says it started to lose a bit of meaning.

When Dunne lost control of his bike in 2019, he was in the lead with Scaysbrook behind. Scaysbrook remembers waiting for the announcement that he had crossed the finish line to sound in his earpiece, which it never came. Gallardo says that she knew that Dunne had passed away as soon as she saw that his time didn’t register in the final section.

In the race footage, which was never released publicly but Gallardo has access to, she says that a white dove flies in front of a line of boulders after Dunne’s crash.

Dunne died on June 30, 2019. On the one-year anniversary of his death, Gallardo went back to Pikes Peak and to the spot where he crashed, accompanied by Dunn’s sister and his Blue Heeler, Sonny, who lives with the family now. Gallardo says that she knew Sonny would immediately find the spot where Dunne crashed.

“It’s the truth that the mountain called him back, but the race—it’s a special person that’s drawn to it. He loved it,” Gallardo says. “One of the things he said was, ‘This is my mountain, this is my race, this is who I am.’ And now it’s my mountain.”

When Dunne tucked his grandfather’s red bandana into his leathers on the morning of the 2019 Pikes Peak International Hill Climb, he didn’t know it would be his last time doing so. But when he crashed, the community made sure that the family memento stuck with him off the mountain and into the coroner’s office.

“That tells me that every single person that ran up there that day to take care of Carlin, did their best,” Gallardo says. “As a mother, what more can I ask for? My son didn’t die alone.”