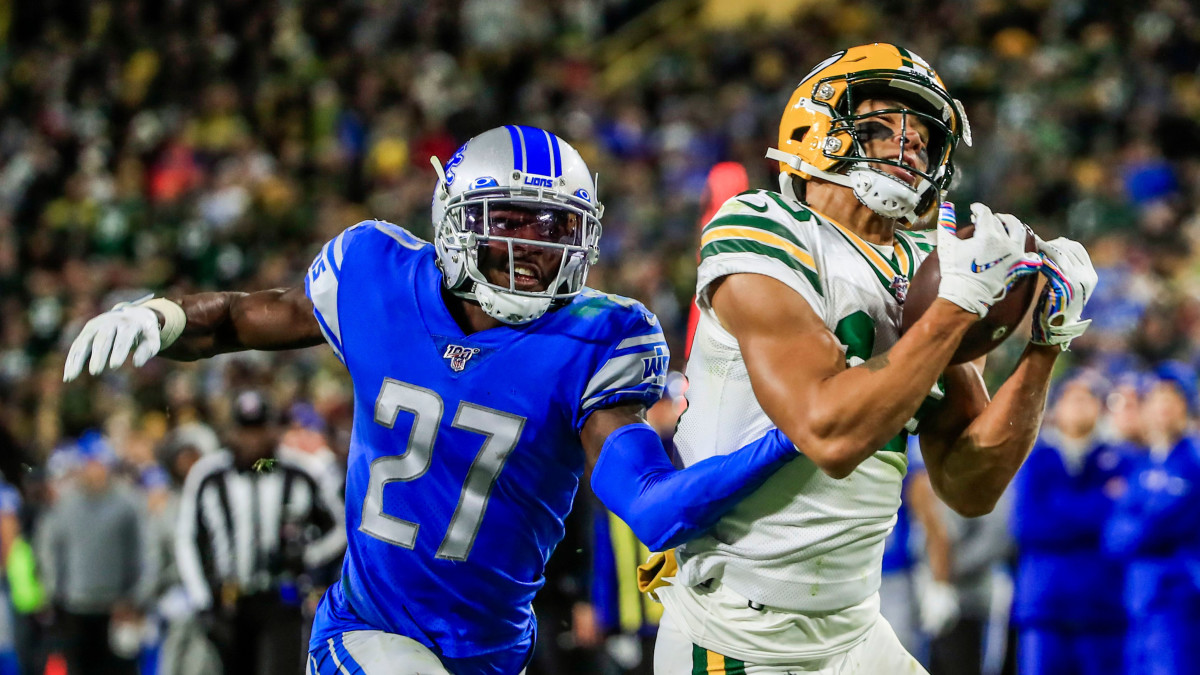 Green Bay Packers wideout Allen Lazard is blessed with size (6-foot-5, 227 lbs) and speed (4.55 40). After signing with the Jacksonville Jaguars as an undrafted free agent after the 2018 NFL Draft, he was subsequently cut and landed on their practice squad. Towards the end of the 2018 season, Green Bay brought him over to their practice squad and hit the active roster just days ahead of the 2019 season.

I say this to illustrate that when you think of practice reps or just the extra given to a team’s top players, this is the first offseason where Lazard is considered a starter. He’s been an underdog for most of his football career.

Lazard was a two-time First Team All-Big 12 receiver out of Iowa State, not exactly a powerhouse program. He turned some heads at the 2018 Senior Bowl and even then, the scouts and analysts were thinking he may need to switch to the tight end position.

What you need to know about Lazard is the guy is tough, hungry and plays with a chip on his shoulder.

If EPA/target and first down/target don’t really mean anything to you, or you don’t know what they are, I’ve included links to make this graph a bit more palatable.

To put it as simply as I can, you want to be closer to Chris Godwin. And to be this close to other studs like Tyler Lockett and Michael Thomas? That’s obviously really great; we just need a larger sample size. This graph essentially shows what a player can do with the ball in his hands.

Worried about Marquez Valdes-Scandling coming up? Well, he only caught 26 of his 56 targets for the worst catch rate for any player with more than 40 targets. Devin Funchess is entering his sixth year and has a similar size profile to Lazard. I’ve always felt Funchess lacked focus and hasn’t put in the consistent effort.

One way to spin the conversation about the Packers not adding to their receiving corps via the draft is to say that they may like what they already have at the position?

Over at PackerCentral, Bill Huber discussed Pro Football Focus’ ratings on the Packers last season, and cited Lazard as the team’s “X-Factor” for 2020:

“You look at the development of a guy like Allen Lazard, what he did last year, and his versatility,” (quarterback Aaron) Rodgers said in a conference call last month.

“He was cut at the end of training camp and then quickly put back on the roster Week 1. By the end of the season, he was called upon many, many times in important situations to make big plays and he did. He’s just a great teammate, and ascending player, loved his approach every week and he made some big-time plays for us.”

Lazard should be a great red-zone threat with his height and ability to box out defenders, then high-point the ball. In what was a 10-week season for Lazard, he finished second on the team in air yards, yards per target, yards per game, and yards per route run.

Opportunity and a full offseason spent grooming him to be the guy are enough for me in an Aaron Rodgers-led offense, especially with an ADP 180. This puts Lazard as the 66th WR off the board in PPR formats.

That price tag makes him your WR6. So the No. 2 WR in Green Bay’s offense has a bottom of the barrel valuation. At the very least, you could handcuff him to Davante Adams.

In Lazard’s 10 games last year, if you extrapolate his totals over 16 games, he would’ve posted 51-694-4. That would’ve made him the WR47, nearly 20 spots higher than his current ADP. With the news (hopefully) coming that he will officially be Packers’ No. 2 WR, his ADP should climb at least 30 or 40 spots. Lazard isn’t just a fantasy ADP riser, he’s going to take off.