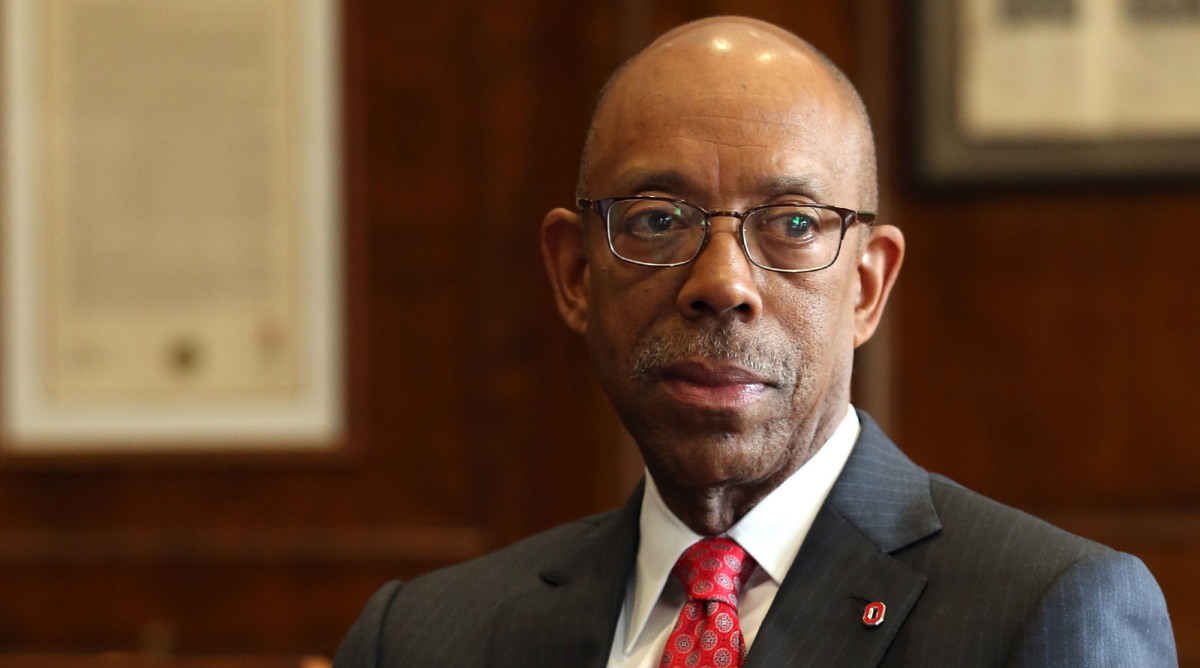 Blumenthal wasn’t getting the answer he wanted. The Connecticut lawmaker’s question, directed toward one of the NCAA’s most prominent leaders, Ohio State president emeritus Michael Drake, was fairly straightforward: Will you, the chairman of the all-powerful NCAA Board of Governors, require athletic departments to disclose the number of positive virus cases among their athletes?

“That’s a HIPAA issue,” he claimed at first.

“I think that will be difficult,” he then said.

“I don’t know,” he later added, “that I have the authority…”

Finally, Drake bent to the questioning. “I believe it’s appropriate for the schools to report the cases.”

In an ironic twist, Ohio State, his own university, is one of the many schools refusing to disclose its viral case numbers. “General numbers, they should be reporting,” Blumenthal told Drake, ending one of the more tense exchanges that unfolded Wednesday on Capitol Hill.

What started out as a U.S. Senate committee hearing on student-athlete compensation materialized into an inquiry on college football’s latest quandary: the coronavirus pandemic. In addition to questions on name, image and likeness, lawmakers quizzed college athletic leaders about viral outbreaks impacting campuses across the country. They chastised those schools that are requiring athletes to sign waivers, insisted that the NCAA create a universal COVID-19 standard and as mentioned, lamented the lack of transparency among roughly half of the 130 FBS programs in declining to disclose their case numbers.

About a dozen senators, some virtually, took turns volleying questions toward a panel of five witnesses, including SEC commissioner Greg Sankey, Ole Miss athletic director Keith Carter and Drake. While the hearing mostly centered on the raging debate on athlete compensation, a sidebar quickly formed: Lawmakers are curious about college football’s handling of virus-related matters. Sen. Jacky Rosen (D-Nevada), for instance, suggested that campus spikes in viral cases are rooted in the absence of a universal virus policy. “The NCAA should step in and provide a nationwide framework,” she said.

The hearing unfolded amid a pandemic that has reemerged in outbreaks across the country, putting college football’s plans for an on-time kickoff in doubt. At least five states have suspended reopening plans, and four college programs have temporarily shut down workouts because of outbreaks. At least 150 Division I players have tested positive for the virus, and that number is likely much larger, Blumenthal said Wednesday. Just in the last few days, at least two Power 5 football players have used Twitter to publicly question the decision from schools to return to voluntary summer workouts.

There is growing concern among officials. Athletic directors fear the potential for large numbers of athletes in quarantine, and officials are rekindling discussions about a spring football season. While he’s still focused on a Labor Day weekend kickoff, Sankey acknowledges the unprecedented events happening across campuses. “It’s certainly not comfortable to see what’s going on around us,” he told Sports Illustrated in an interview after the hearing.

A spring season remains one of several contingency plans that high-ranking college football officials are examining, according to Sankey.

“When I’ve said we’re looking at contingencies, that’s always been one of those elements of 18-20 possibilities. You have to think about, ‘What will you know in January that will be different?’ It’s been difficult to predict. We have to be careful in our decision making. Even amidst the concerning data now, we want to make sure we take care of our young people first and then we’ll see what happens through July to make decisions.”

Sankey says a deadline date to determine if a football season can be played remains “unknown,” but he noted a “window” of time from now until the start of traditional camps, which begin the first week of August. Meanwhile, Carter’s optimism has waned.

“On June 1, I was really optimistic about everything, but I’m less optimistic today about a normal start,” he told SI after the hearing. “We may start on time but as far as what our crowds look like… This is going to be interesting over the next two to three weeks, because we have to put our foot on base.

“It’s time,” Carter continues. “We’re into July now. It’s time to decide ‘Hey, are we going to start on time or push this thing down the road?’”

On Wednesday, the Ivy League announced that it would make a decision on a 2020 football season by July 8. Already, at least four Division II and Division III programs have canceled their seasons, with many more likely on the way, administrators say. Many FBS officials describe a spring football season as a last resort, but the scenario is picking up steam among athletic directors. “I think that that was a scenario we talked about earlier on as we talked about all scenarios,” Carter says. “Obviously, it kind of died down as we brought student-athletes back, but I do hear that discussion being brought up more.”

On Wednesday, the pandemic hung over the committee room. Outside of lawmakers and the five panelists, only a small number guests were allowed, each separated by about six feet and, when not speaking, donning masks. Drake, who just moved this week into a post-presidency role at Ohio State, found himself on the receiving end of most of the virus-related questions from lawmakers. He told Rosen that the NCAA Board of Governors is discussing this week the prospect of a universal virus health/testing plan and that he supports such a move.

Drake and Blumenthal were involved in two uneasy exchanges — about schools’ lack of transparency in positive cases and regarding waivers that some schools are requiring their athletes to sign in order for them to work out. While many administrators — Drake included — says the documents aren’t legal waivers, others disagree. Blumenthal and Sen. Cory Booker (D-New Jersey) announced Tuesday that they had drafted legislation to prohibit colleges from having athletes sign the waivers. During the hearing, Blumenthal asked each panelist to respond in writing to his bill. Sports Illustrated explored the enforceability of these waivers in a story last month.

Blumenthal read aloud a passage from the Ohio State document, the Buckeye Pledge, that athletes and students will sign. “That is, in effect, a waiver, from my standpoint as a lawyer, “ Blumenthal said.

Drake insisted that athletes are not waiving their rights to sue by signing the forms. “I hope your lawyers agree with you,” Blumenthal said. Responded Drake: “I do too.”