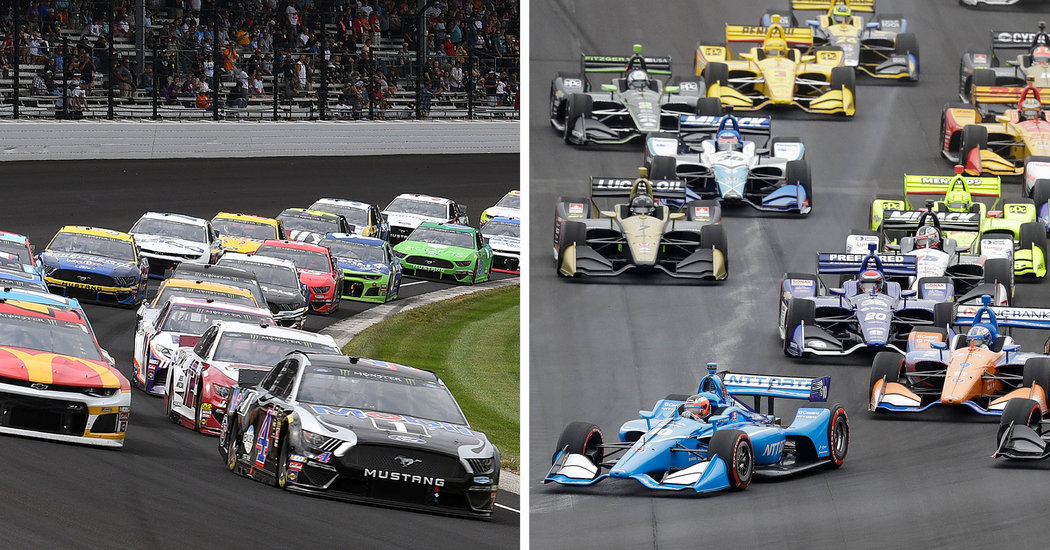 An event few motor sports fans ever thought would occur, with longtime rivals from IndyCar racing and NASCAR stock cars competing on the same weekend and at the same facility, finally arrives this weekend at the Indianapolis Motor Speedway.

The Grand Prix at Indianapolis, an IndyCar race that was postponed from its original May date because of the coronavirus pandemic, will go off Saturday on the speedway’s road course. A NASCAR Xfinity Series race will follow on the same track. On Sunday, the Brickyard 400, a jewel of the NASCAR Cup Series, will be raced on Indy’s 2.5-mile oval.

“This concept has been talked about for years,” said Scott Dixon, the Indianapolis 500 winner in 2008 and a five-time IndyCar Series champion. “But it took strange times — really strange times — to make the impossible finally happen.”

NASCAR and IndyCars have not shared the same facility since 1959, when Daytona International Speedway opened with its banked design. In February 1959, less than two weeks before the Daytona 500, Marshall Teague was killed while attempting a closed course speed record in excess of 170 m.p.h. in a modified Indianapolis roadster. Two months later, George Amick was killed in an Indy-type car event, also at Daytona.

The deaths convinced Bill France Sr., who had founded NASCAR and built the Daytona International Speedway, that the two types of cars did not belong on the same track.

“The Indianapolis-type cars just aren’t suited for our types of tracks,” France said in a 1977 interview. “I don’t see us ever running an event with them.”

“Never? Not unless hell freezes over?” I asked him.

“That pretty much sums it up,” he replied.

Through the years, the two types of racing seemed to be in existential competition with each other for fans, broadcast contracts, sponsors, race dates and venues. Knockout scheduling, with races at conflicting dates and times, has helped make drivers from one series feel unwelcome or unable to compete in the other.

Yet this once-unthinkable marriage is about to happen after a series of steps, each one presenting a seemingly insurmountable hurdle.

“The biggest obstacle was scheduling,” said Mark Miles, chief executive of the company that runs the Indianapolis Motor Speedway and IndyCar racing. “NASCAR sets its schedules years in advance, while IndyCar’s schedule usually comes together much later. There were also other promoters whose input had to be taken into consideration, and, of course, there were sponsor conflicts to resolve. And we had to consider the broadcast contracts.”

Before those considerations could be addressed, said Steve O’Donnell, NASCAR’s executive vice president, his sanctioning body had to change its rules package for its premier Cup series cars, to make them more competitive on the Indianapolis speedway’s flat oval. Since a splashy inaugural race in 1994, the Brickyard 400 had become stale, and its crowds, which were once estimated at 250,000, rivaling those for the Indianapolis 500, had dwindled disconcertingly.

Then, last year, NASCAR tore up its traditional schedule, and moved the Brickyard 400 from later in the summer to the Fourth of July weekend. An event at Daytona that usually fell on that weekend was moved to August.

Next, in an attempt to provide more bang for spectators’ bucks, a support race for NASCAR’s Xfinity feeder series was added to the schedule a day earlier, for the first time on Indy’s twisty road course.

When the pandemic forced the speedway to close in the spring, and dates on both the IndyCar Series and the NASCAR Cup Series’ schedules were scrubbed, officials in both organizations decided some bold thinking could reinvigorate interest in racing as a whole. The 2020 schedule was ripped up again, and new races that promoters were willing to run without spectators were added.

“That was something we were very much in favor of, from a broadcast standpoint,” said Sam Flood, executive producer of NBC Sports’s telecasts of IndyCar, NASCAR and IMSA sports car racing. “It was something we had been pushing for, for almost three years. It suddenly made sense for this year, especially with Roger Penske coming on board, and pushing for it. That’s when the whole idea hit hyperdrive.”

He added: “I guess that’s one positive coming out of this whole Covid thing. It made it possible” to consider what once seemed impossible.

NBC, he said, had been looking for ways to “cross-pollinate” its motor sports properties. Drivers racing in IndyCar and NASCAR events on the same day — as Kurt Busch did in 2014, albeit at venues hundreds of miles apart — would help integrate normally disparate sets of fans.

Although no drivers in this weekend’s races will attempt to compete in both types of cars, Flood sees it as an opportunity next year and beyond.

“One of our regular IndyCar announcers, Townsend Bell, however, will be on the broadcast team for the Grand Prix Saturday, after which he will fly to Daytona, to compete in the IMSA sports car race we will be televising Saturday night,” Flood said. “We hope to see more of that kind of participation that draws different kinds of racing closer together.”

After the races at Indianapolis this weekend, Jimmie Johnson, a seven-time NASCAR Cup Series champion, plans to test Dixon’s IndyCar on the speedway’s road course. Johnson, who is retiring from full-time NASCAR racing after this season, said he hoped to have an opportunity to try some IndyCar races in 2021.

“I don’t see a reason, from a physical standpoint, where a driver couldn’t compete in an IndyCar race and a NASCAR Cup race on the same weekend, or even the same day,” Busch said. “Physically, mentally, yeah, no problem, but the difference maker is the experience. It’s very difficult to just jump into an IndyCar from a stock car, or vice versa, without having the experience of driving both types of cars regularly.”

That’s a sentiment with which Dixon agreed. “While I like to focus on what I know I’m good at,” he said, “this does open drivers’ minds to new possibilities. Could I do it? Absolutely. Would I do it? We’ll see.”

Saturday’s IndyCar race is scheduled for noon, Eastern time; the Xfinity event goes off at 3 p.m. Eastern; and the Daytona IMSA race gets a green flag at 6 p.m. The Brickyard 400 is at 4 p.m. Sunday. The four events will be on NBC or NBCSN.

Asked if he foresaw any problems with broadcasting so many different kinds of races on different tracks, for more than 13 hours, in the same weekend, Flood likened the process to the sight of a duck serenely gliding across the water’s surface: “Underneath, you can’t see how furiously the feet are paddling.”