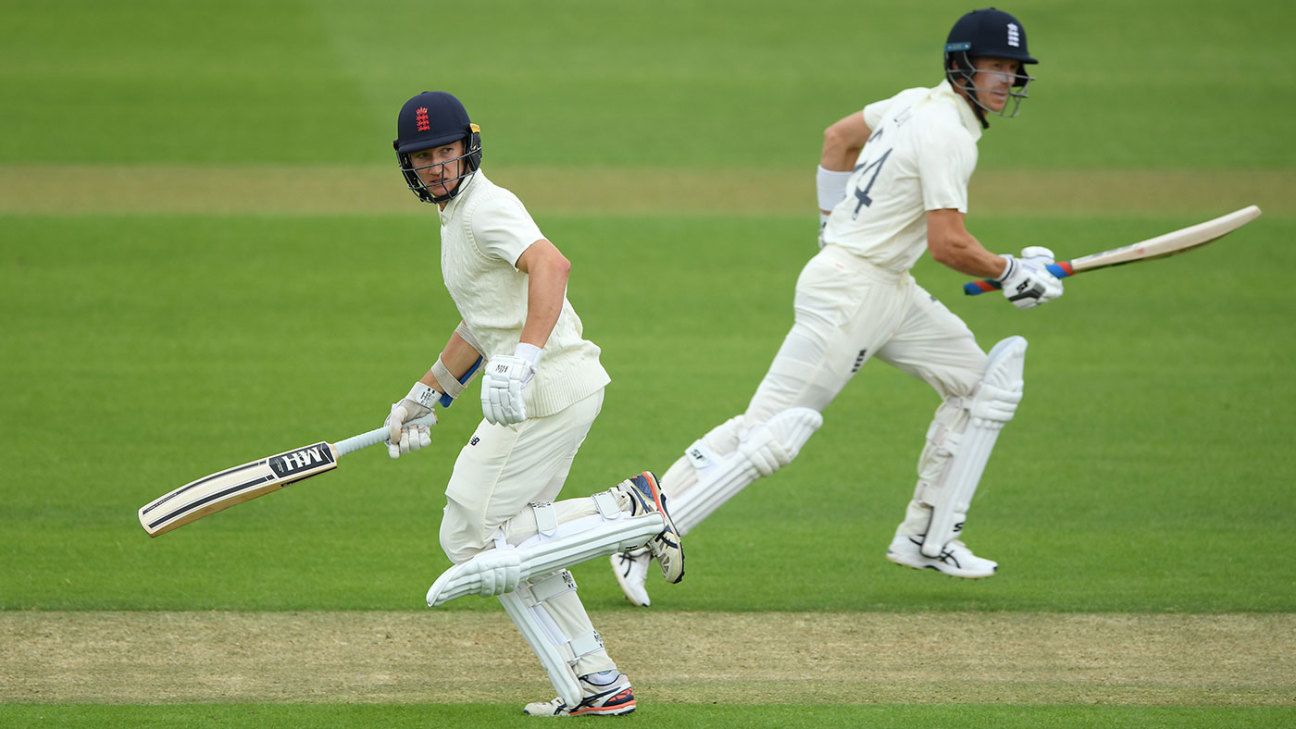 It wasn’t a first-class innings, and it barely even counts as an England representative game. And yet it was played in England colours, against a Test-class bowling attack, and in spite of the unavoidable lack of a crowd, it was televised to a global audience, albeit via the ECB’s own fixed-camera web-stream.

Three and a half months after England’s cricketers left the field in Colombo as their tour of Sri Lanka was abandoned due to the Covid-19 pandemic, James Bracey became the first Englishman to score a half-century in the 2020 home season. And in so doing, he laid down the sort of marker that he hopes could yet earn him higher honours before the summer is out.

Invited to open the Buttler XI innings alongside Rory Burns, Bracey not only outlasted his senior partner but turned his opportunity into an impressively fluent 85 – an innings that might have promised even more had he not been strangled down the leg side with a century beginning to beckon.

Nevertheless, for the 23-year-old Bracey – nominally the fourth-choice wicketkeeper in England’s 30-man squad – this was an innings full of calm shot selection and measured decision-making that can only have turned heads in his favour, especially given that he is a relative newcomer to the opener’s role, having done the job on an irregular basis for Gloucestershire in last season’s County Championship.

“I’m delighted with today, it was a great opportunity to get out there against the new ball, and show them what I’ve got,” said Bracey. “I haven’t opened up a huge amount in the last couple of years and a lot of people wouldn’t have seen me play in that role, so it was really nice to repay some faith and show them that I’ve got the capability to do that job.”

By his own admission, the step up from Division Two Championship cricket to the England set-up has not been a small one, but Bracey’s head for heights has already been clocked by the national selectors – not least thanks to his key role on the Lions tour of Australia in February, a trip in which he made a key half-century at Melbourne in the visitors’ first victory in an unofficial Test in seven tours.

“Big moments like that are obviously going to go a long way for me personally,” said Bracey. “Being able to score runs and keep wicket was really nice and may have gone a long way for me to be part of this squad.

“Obviously I haven’t played Division One like a lot of the other lads, so it was nice today to get a taste of what those Division One pitches are like, and to play on a Division One ground which I haven’t done a huge amount of.

“But I think there are skills I’ve developed playing in [Division Two] on maybe some more challenging pitches against different styles of bowling that I think can put me in good stead going up those levels. I think it’s helped me build a pretty sound technique and hopefully I can take that into Test cricket at some point if I’m lucky enough.”

Bracey certainly held his own against the best of British today, withstanding James Anderson‘s new-ball bursts as well as some brisk fare from Saqib Mahmood in particular in the morning session. But on an attritional wicket, and against an attack that has been barred from using saliva to shine the ball due to the Covid-19 outbreak, he was able to thrive as the day wore on, not least in a 98-run stand with Joe Denly for the second wicket.

“The ball went quite soft a way out but I think that was the state of the ball itself,” said Bracey. “It did swing for Stokes in particular and Anderson did get it to talk, but it lacked a little bit of that zip.

“The lads worked hard on the ball in terms of dry-shining, possibly using any sweat they could get on the ball, but it’s very different. They’ll have to be creative with ways that they can get the ball to move around.

“But as much as it was tough and attritional for the bowlers, it was tough for us guys to score in periods as well, especially when they built pressure. It’s possibly not what we expected a Test-match pitch to be like but it’s good practice nonetheless to get to test our skills, and try and build that temperament ready for next week.”

As much as Bracey made his personal case, arguably the key innings of the day came from his Lions team-mate, Dan Lawrence, whose hard-hitting half-century further cemented the sense that he is the coming man in England’s ranks, particularly given that Joe Root’s paternity leave creates a vacancy in the middle order for the first Windies Test.

“He looks really good,” said Bracey. “I played with Dan all winter. I went to India with him before Christmas and he was obviously with us on the Lions in Australia, and he was outrageous when we went over there.

“He’s really good at going through the gears, but it’s important to know he’s got a really good defensive game too. He’s definitely got the technique to play Test cricket, no doubt about it. Today, we saw more of that and he was able to get into his stride.”