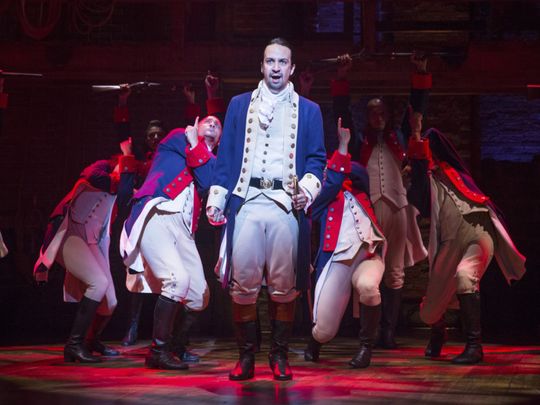 The first time I saw ‘Hamilton’ on Broadway, it was a complete fluke.

That sounds blasphemous. It’s notoriously difficult to score ‘Hamilton’ tickets — like, more difficult than escaping the weird Elmo-dressed dude in Times Square who wants a dollar in exchange for a picture with him. (Disclaimer: I paid the dollar. I took the picture. It did not feel good.)

‘Hamilton’ has been on Broadway since 2015. And ever since the hip hop-inspired stage show hit the Richard Rodgers Theatre five years ago to rave reviews and critical acclaim, it’s been sold out months in advance. Its popularity astonished the world; it broke through the “old is gold” mentality of musical theatre and became a phenomenon.

Creator Lin-Manuel Miranda — who originated the role of Alexander Hamilton in 2015 but retired it a year later — was also pretty strict about keeping the ‘Hamilton’ experience sacred. No pictures, no video clips; Miranda made a habit of calling out bootleggers he spotted in the crowd on social media afterwards, describing where they were sitting and what they were wearing.

There was an exclusive air about the show. You had to be there to understand the hype. Which is why a movie that everyone can watch has the potential to change everything.

I really wish I had a glamorous story about my hard-fought battle for ‘Hamilton’ tickets. The truth is, when I bought my ticket (singular; I went alone), I was star-fished on a hotel bed in Williamsburg, New York, in 2017, idly scrolling through my phone and trying to decide what to do with my free day.

I had been on a work trip at the time, following the cast of Netflix’s ‘The Defenders’ around China Town, and I only had a few hours to spare.

Like a lightbulb moment out of a cartoon, I remembered: ‘Hamilton’ exists. And it was just a short subway ride away.

My context for the show had been that a friend of mine was OBSESSED with the soundtrack. It had a cult following among fans who had never seen the show, and my friend kept trying to get me to listen to it, too. But being the non-American person that I am, I had a hard time piecing together the rich historical image that Miranda was trying to paint about the founding fathers of the United States.

Miranda had been inspired by the extensive 2004 biography ‘Alexander Hamilton’, which he read on summer vacation. He wrote Hamilton’s story through rap, hip hop and a few traditional show tunes; his selling point was that the historical figures in the stage production were played by non-white actors.

But, listening to the soundtrack, the chronology was lost on me and I had a hard time keeping up with which character was saying what. I felt useless.

Which is why, the day after I spontaneously bought a ticket to the show in New York, I woke up to a message from my friend in all capital letters, demanding: “YOU SAW HAMILTON?”

I’m probably the last person she expected to see it. Even more jarring, I was suddenly a fan. I went on social media to share images from the stage door where I stood in the cold after the show just to congratulate the cast and get my show bill signed.

Every single thing about that soundtrack suddenly made sense to me. The humour, the tenacity, the fear, the emotion, the betrayal, the love, the heartbreak, the battles won and lost — both on a physical and emotional level. The breathtaking physicality of the show, the deft movements of the cast, the comedic timing, the joy, the anger, the foot-stomping urgency, the way the stage spun around during one track to signal a flashback in the story… It all was so masterfully done.

At the centre of it all, there was Alexander Hamilton. The young, hungry immigrant who’s skilled with the pen and willing to fight by any means necessary for his country. He knows how to make quick friends, dangerous enemies and strong alliances in high places — which gets on the nerves of Aaron Burr, Hamilton’s sweet-talking political rival who, as Leslie Odom Jr sings on ‘Aaron Bir, Sir’, doesn’t think you should let people know what “you’re against or what you’re for.”

NOT YOUR DAD’S BROADWAY SHOW…

But, despite all this, my favourite part of the show had nothing to do with the show.

Managing to get a ticket pretty close to the stage, I found myself sitting on an aisle seat next to two young boys and their father.

Before the show started, the boys seemed bored out of their minds. They were bratty and seemed offended that their dad had brought them to the theatre (how boring!). I really sympathised with dad, who kept lightly berating them; I wished I could turn to those two boys and say, “Do you know how lucky you are to be in these seats right now? Your dad did good!” They didn’t know the pain of paying for ‘Hamilton’ tickets out of their own pocket!

But something completely magical happened halfway through the show. Their postures transformed. They went from sagging in their seats disdainfully to being scooched forward, backs hunched, eyes wide, enraptured by what they were seeing. They were witnessing hip hop genius, rap battles and perfectly timed curse words. The show was easy to digest and impossible to tear your eyes from. ‘Hamilton’ wasn’t their dad’s typical Broadway show.

THE ORIGINS OF HAMILTON

The following year, desperate for anyone to talk to about ‘Hamilton’, I was lucky enough to take a birthday trip to the UK with my sister, and we saw the show together on the West End.

I enjoyed the West End experience, but the show on Broadway made more sense. There were jokes that were specific to American audiences that simply landed better in New York than they did in London.

Plus, that feeling when the actors dropped the famous ‘immigrants’ line in the show, and everyone in the audience erupted into wild applause? It went down without much fanfare in the West End.

Nonetheless, my interest in ‘Hamilton’ — and its origins — grew. I started to look into how Miranda came up with the idea.

That’s when I stumbled upon an incredible video of Miranda, looking young but ferocious (he truly embodies the scrappy spirit of ‘Hamilton’), as he performed ‘Alexander Hamilton’ at the White House in 2009.

Miranda, fast-talking and gesticulating, told the audience: “I’m actually working on a hip-hop album, that’s a concept album about the life of someone I feel embodies hip hop, treasury secretary Alexander Hamilton.” Cue a camera pan to the audience, where Barack and Michelle Obama can be seen laughing, perhaps delighted by this bizarre suggestion.

Years later, it’s 2016, and the president and the first lady are introducing ‘Hamilton’ at the 70th Tony Awards.

“Seven years ago, a young man came to a poetry jam that Michelle and I held at the White House,” said the former US President. “I confess, we all laughed, but who’s laughing now? Seven years later, ‘Hamilton’ has become not only a smash hit, but a civics lesson our kids can’t get enough of … One where rap is the language of the revolution and hip hop its urgent soundtrack.”

Hamilton set a new record with 16 nominations in 13 categories, winning 11 of those awards that night.

THE MOVIE: A GIFT FROM MIRANDA

When the ‘Hamilton’ film drops on July 3 on Disney+ (July 4 on OSN, here in the UAE), it will go from a partially lonely, exclusionary experience to one that can be shared between friends and family.

The movie, which is a recording of the stage production with the original Broadway cast, was first supposed to release next year, before Disney bumped it up to 2020. I can’t think of a better time to give people something to look forward to. The escapism is direly needed. ‘Hamilton’ means a lot to a lot of people, many of whom have yet to get the chance to see it in person, and this is a gift from Miranda that will no doubt uplift many spirits at a time of (yes, that dreaded word) uncertainty and collective grief.

As for me, I have the my snacks ready and the soundtrack memorised. While I’m a little curious about the PG-13 rating, which means some of the original expletives have been edited out, and how that might alter the experience ever-so-slightly, I’m confident that Miranda’s vision will come through and put a smile on my face.

No more desperate race to score tickets. So long as the remote control is in my reach, I have the best seat in the house.

‘Hamilton’ streams on the OSN streaming app on July 4 in the UAE from 4am, filmed at The Richard Rodgers Theatre on Broadway in June 2016.