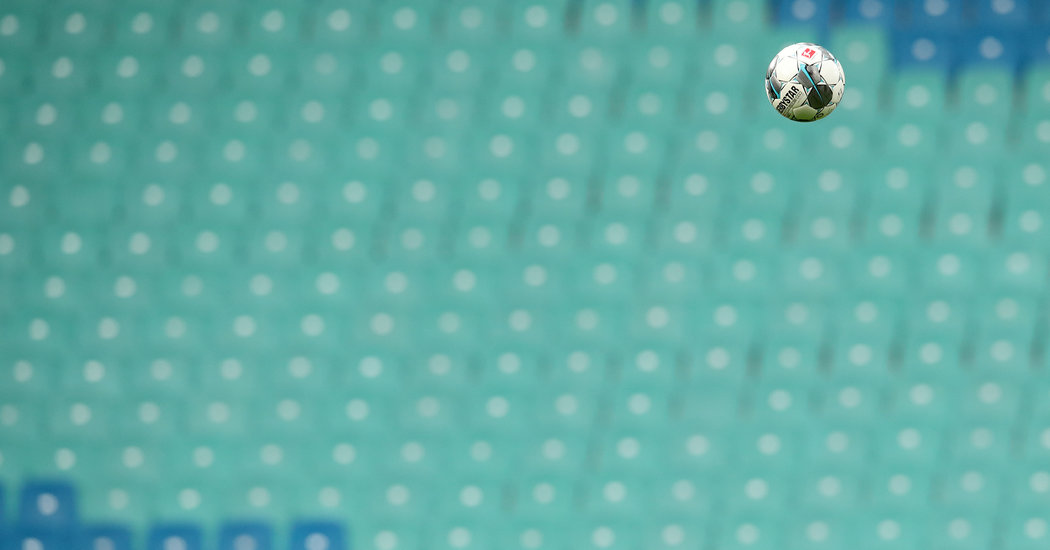 Germany’s privilege was also its risk. On May 16, the Bundesliga became the first major league in any sport in the world to tread gingerly into the light of the post-coronavirus world and attempt to play on. To some, it was a purely financial decision, evidence of soccer’s lost soul. To others, it was existential pragmatism, the only way to ensure survival.

Either way, the Bundesliga became a trailblazer, a reference point for all the other leagues trying to find their way out of lockdown. England’s Premier League has credited its German rival with accelerating its own return, and Bundesliga executives reported fielding calls from their counterparts in major North American sports who were eager to pick their brains.

But more than that, the Bundesliga’s comeback turned into a grand experiment, one that could answer some of soccer’s, and to some extent sports’, biggest questions.

For decades, studies have examined the role fans play in the world’s most popular game: How much do they contribute to home advantage? Does their presence affect the way teams play? Would their absence materially alter the nature of the game?

The Bundesliga’s data offers the first glimmer of an answer to some of those questions, and an unwelcome glimpse into some of the game’s mechanics.

Fans Are the Home-Field Advantage

If the last six weeks proved anything, it was that players thanking fans for their support after a game is more than a platitude. Home-field advantage has long been far more significant in soccer than in most other sports. The great, unwelcome experiment running in Germany since May has demonstrated that what constitutes that advantage is not mere familiarity but, largely, the fans.

The performances of home teams in the Bundesliga have, for all intents and purposes, collapsed in front of empty stands. The number of home victories slipped by 10 percentage points, to 33 percent of matches in empty stadiums from 43 percent in full ones.

The change has been so extreme, in fact, that Lukas Keppler, a managing director of the data and analytics firm Impect, noted a sort of “negative home advantage.” For the first time in soccer history, he said, it has appeared, at times, to be easier to be playing on the road.

According to data provided by another analysis firm, Gracenote, home teams scored fewer goals than they had in full stadiums (1.74 to 1.43 per game), leading to a decline in goal scoring over all.

They also took fewer shots (a decrease of 10 percent), and those that they did take were worse. (The probability of any given shot ending up as a goal dropped more than a point, to 11.11 percent.) Home teams, the research found, also attempted fewer crosses, won fewer corners and tried fewer dribbles.

By almost every attacking metric, Bundesliga teams were worse while playing in an empty home stadium. Most curiously, goalkeepers performed better away from home than they did on their own turf: The percentage of shots saved dropped noticeably for goalkeepers on familiar territory, but increased for those on visiting teams.

The Referee Is No Longer a Homer

Another aspect of home-field advantage that has been exposed in Germany is the impact a crowd can have on a referee. A considerable body of academic research, in fact, has long suggested that “all or part of home advantage” is down to “refereeing decisions being subconsciously in favor of the home team,” Gleave pointed out.

That idea now can step out off the page and into real life. In the 83 matches Gracenote analyzed, home teams were penalized more for fouls in empty stadiums than they generally were when the stands were full. They also had seen, perhaps not surprisingly, an increase in the number of yellow cards they were awarded.

Both teams committed more fouls in empty stadiums than they had in full ones — perhaps a sign that referees, without a crowd to consider, have felt empowered to enforce the rules more rigidly. But there has been a significant shift in culpability: After the restart, hosts committed more fouls than their guests.

“The increase in yellow cards and fouls by the home team in matches behind closed doors appears to confirm the hypothesis,” Gleave said.

Indeed, in empty stadiums, visiting players no longer need to feel they are playing against 12 opponents. The corollary of that, of course, is perhaps more significant: In normal times, perhaps the field was not quite as even as it should have been.

(Lack of) Intensity Is in the Mind

That first weekend, the players felt it. There was no wall of sound to greet them as they entered the field, no roar to urge them on after a setback, no delirium to greet a goal.

Empty stands seemed to sap games of their urgency and intimidating stadiums of their hostility. At least one player noted motivation — to strain that final sinew, to make that last burst — was more elusive in the silence. Many fans, watching on, seemed to detect the same lack of intensity.

The data, though, does not bear that out. According to the Bundesliga — which tracks and records its own analytics, and then feeds the numbers back to its clubs — players sprinted a little more, and teams made marginally more high-intensity runs, in games held in empty stadiums than they had previously this season.

“The game does not appear to be any less intense at all without fans,” Keppler said. Though most teams’ performance varied only a little, he noted that “Bayern Munich, the team that had the most sprints before the coronavirus break, could even increase their rate afterward.”

Bayern — on its way to recording an eighth consecutive championship — was not as impressive as Hertha Berlin, though. Inspired by a new coach, Bruno Labbadia, Hertha went from producing 211 sprints in a game to 238 (bettered only by Bayern and Augsburg), and managed almost 100 more high-intensity runs per game.

Dortmund, meanwhile, slumped, enduring the largest drop in those two metrics of any team in Germany. The lesson, perhaps, is that the presence of fans is not as significant to a team’s intensity as having something to play for. Where Hertha’s players had a new coach to impress and a season to save, Dortmund was drifting to yet another year in Bayern’s shadow. That, rather than the empty stands, drew its sting.

The End of Entertainment

While industry and effort might have remained unchanged, Gleave saw in his figures — fewer shots, fewer dribbles, fewer home wins — proof that something was missing.

His conclusion, one that many fans watching might instinctively uphold, is that the urge to entertain diminishes if there is nobody to respond. Games since the restart have featured, on average, 16 more passes than normal, a signal to Gleave that players, subconsciously or not, are “choosing to pass the ball rather than attempt plays which would normally get fans on their feet.”

And yet similar data sets can give rise to different conclusions. Impect’s signature statistic is a metric called packing: a way of measuring how many opponents are bypassed by each and every action — whether a pass or a dribble — a player makes. “It measures the effectiveness of a team’s buildup,” Keppler said, and it has been, essentially, unchanged since the restart. “The overall quality of the game remained the same.”

That finding is not necessarily contrary to Gleave’s data, and it is not a riposte to Arsène Wenger’s assertion that soccer would lose some of its magic if it endured a prolonged period without fans. Teams run just as much as they did. They are no less talented than they were in March.

But the absence of fans — the cavernous stadiums, the oppressive silence, the sense of unreality — changed, somehow, the way the players expressed that talent, the way they approached the game. It created a more cautious, more mechanical approach, focused on the end result more than the process.

The Bundesliga’s return in May was confirmation that soccer was, first and foremost, a business, more than a game. What the experiment of the last six weeks has shown is that is precisely what it became.