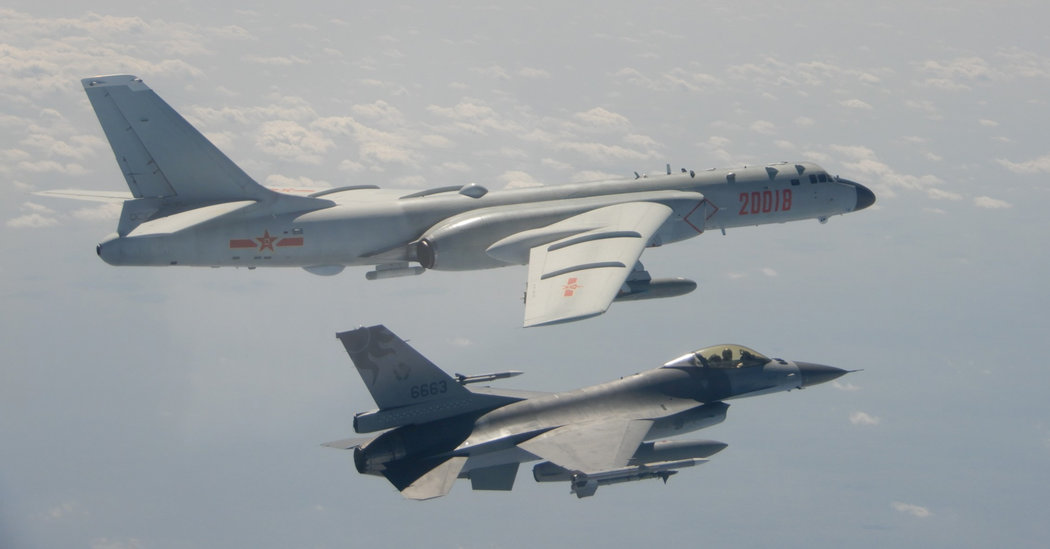 TAIPEI, Taiwan — China’s leader, Xi Jinping, has long tried to convince Taiwan that unification was a historical inevitability, alternately enticing the democratic island with economic incentives while bluntly warning that any move toward formal independence would be answered with military force.

Now, the incentives are gone and the warnings seem more ominous following Mr. Xi’s swift move to strengthen China’s grip on Hong Kong, a semiautonomous territory that only last year he held out as a model for Taiwan’s future.

The new security rules for Hong Kong that China passed this week — without input from the city’s Beijing-backed leadership — have made Mr. Xi’s promise of autonomy under the “one country, two systems” framework seem hollow. And it has raised fears that China will move more aggressively to bring Taiwan, too, under its control.

“Hong Kong has become less free, so our sense of fear has increased,” said Chen Po-wei, a Taiwanese lawmaker who supports independence. “Because of China’s nature, there is a high possibility of conflict.”

Mr. Xi, China’s most powerful leader in decades, has shown a penchant for provocative actions, especially lately, with the world distracted by the devastating spread of the coronavirus.

In recent weeks, China has buzzed Taiwan’s territorial airspace almost daily. It accused Taiwan’s president, Tsai Ing-wen, of carrying out a “separatist plot” by speaking at an international democracy forum. It has warned the Taiwan government to stop providing shelter to Hong Kong political activists, who are flocking to what they call the last bastion of freedom in the Chinese-speaking world.

“Part of the game is making people in Taiwan feel helpless and trying to direct their frustration against leaders in Taipei,” said Matthew P. Funaiole, a senior fellow with the China Power Project at the Center for Strategic and International Studies.

Mr. Funaiole said Beijing was also looking at how the United States and other countries would respond. “We’ve seen plenty of examples of China testing and prodding and doing just enough to stay below the threshold of eliciting a strong response from the U.S.,” he added.

The repeated pledges by Ms. Tsai to preserve the island’s sovereignty now set the stage for even greater tensions in the months ahead. Mr. Xi’s attempts to rein in dissent in Hong Kong have only heightened a sense of crisis and galvanized pro-independence forces who have pressed Ms. Tsai to do more.

Ms. Tsai won re-election in a landslide in January over Han Kuo-yu, a candidate who had pushed for closer relations with China. Last month, voters in the city of Kaohsiung, where Mr. Han was the mayor, recalled him.

A survey in May by Academia Sinica, a research institute, found that only 23 percent of Taiwan residents regarded China as a “friend of Taiwan,” compared with 38 percent a year earlier.

“We are very disappointed that China is not able to carry out its promises,” Ms. Tsai said on Tuesday after the Hong Kong security law was passed. “It proves that ‘one country, two systems’ is not feasible.”

The possibility of a military conflict between China and Taiwan remains remote, experts say, because the costs for Beijing would be extraordinary, including significant casualties and damage to its international standing. Yet the two sides are moving farther and farther apart, with little appetite for compromise.

Trade and tourism have dropped significantly, as Ms. Tsai’s government has sought to deepen economic ties, if not diplomatic ones, with sympathetic nations.

As always, Taiwan’s defense turns on the question of American support. The United States is committed to providing help for Taiwan to defend itself, and the Trump administration has cleared the way for the sale of weapons to the island, including F-16 fighter jets.

Doubts have emerged about President Trump’s personal commitment to Taiwan, especially as he tries to hold together a trade deal with China. In his new memoir, John R. Bolton, Mr. Trump’s former national security adviser, said the president had repeatedly belittled the island’s significance compared to the mainland.

The lack of vocal support from Mr. Trump — who shortly after his election took a telephone call from Ms. Tsai, infuriating Beijing — has contributed to fears in Taiwan that China might be emboldened to take aggressive action.

Ms. Tsai, first elected in 2016, has been cautious in her approach toward China. When Taiwan announced last month that it would expand efforts to provide refuge to activists fleeing Hong Kong, for example, the government avoided giving too many details, to avoid angering Beijing.

Even so, Ms. Tsai’s profile has risen since her re-election in January. It has been bolstered by Taiwan’s successful containment of the coronavirus, which she and other officials have loudly touted around the world as evidence that democratic systems can be effective in the face of a public health crisis.

While the crackdown in Hong Kong has unified Taiwan’s famously fractious political parties against the mainland, some have urged the governing Democratic Progressive Party, which is highly critical of Beijing, to avoid escalating military tensions.

“If Taiwan fights against the Chinese Communist Party, the United States won’t come to rescue us,” said Hsu Chih-rong, a lawmaker from the opposition party, the Kuomintang. “Taiwan cannot afford such a risk.”

Among Chinese nationalists, Hong Kong and Taiwan are seen as the two remaining strongholds of opposition to Mr. Xi’s rule in the Chinese-speaking world. Some mainland officials and scholars argue that now is the time to signal that Beijing will not tolerate resistance to its policies.

Tian Feilong, a professor of law at Beihang University in Beijing who studies Hong Kong and Taiwan, said the new security rules would “cut off all the links of confluence between Hong Kong independence and Taiwan independence.”

He added that unification with Taiwan remained a priority for China’s leader. “The weight of the Taiwan problem in his heart, the urgency to solve it and the sense of mission will be even stronger” for Mr. Xi, he said.

Mr. Xi, who rose to power in 2012, once bet that greater economic ties between the mainland and Taiwan would bring the two sides closer and make unification more palatable.

The mainland offered incentives to businessmen to trade and invest across the strait, even while it tried to build support among private organizations. A defector to Australia last year claimed that China’s military intelligence even funneled payments to Taiwan media organizations and politicians.

Ms. Tsai, for her part, has refused the condition that China has set for improved relations: acceptance of China’s view that the island is an inexorable part of a greater Chinese nation under the Communist Party.

Beijing has since tried to punish Taiwan economically, including by banning some tourism to the island. Increasingly, Mr. Xi has abandoned efforts to court Taiwan through economic and cultural means, instead warning that the mainland’s patience is limited.

“People who might genuinely want to engage can’t feel safe engaging anymore with the P.R.C.,” said Shelley Rigger, a professor of political science at Davidson College who studies Taiwan, referring to the People’s Republic of China.

“Whenever we see that kind of impatience and assertiveness and lack of consideration for external disapproval, that doesn’t bode well for Taiwan,” she added.

In recent weeks, there has been a marked increase in military operations around the island’s territorial waters. In response, Ms. Tsai has tried to project strength, appearing alongside officers at a conferral ceremony and calling on the military to remain vigilant.

During past moments of tension with the mainland, some Taiwanese moved overseas or transferred their assets to foreign accounts, fearing a conflict might erupt. This time, however, a desire to preserve and protect the island’s identity has brought a sense of solidarity, some activists say.

“Instead of fleeing, people stand in unity,” Freddy Lim, a pro-independence lawmaker. “We are very united and angry, but we’re thinking about how to show our unity, our progress in national defense and our determination.”