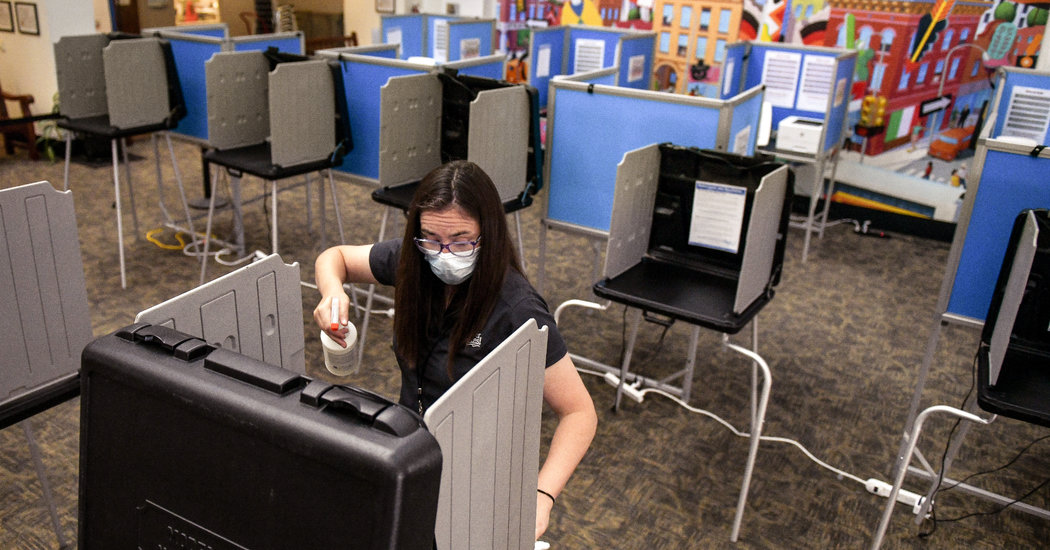 Good morning. The U.S. sets another daily virus record. American Airlines will begin filling its planes. And Colorado offers a model for voting smoothly in a pandemic.

Voters didn’t have to wait in long lines. Turnout was high. And results were available shortly after the polls closed.

Sounds almost too good to be true, doesn’t it?

It’s not. It is a description of yesterday’s primaries in Colorado.

The state avoided the miserable lines that voters in Georgia and Wisconsin recently endured — lines that are a waste of time and, even worse, a health risk during a pandemic.

And unlike in Kentucky and New York, Colorado didn’t take a week or more to count its ballots. It began counting before Election Day. After polls closed, at 7 p.m., people quickly knew that John Hickenlooper had won the Democratic nomination in a closely watched Senate race.

Colorado accomplished all of this thanks to a universal system of voting by mail, which began in 2014. The state sends a ballot to every registered voter weeks before Election Day. Voters can return the ballot by mail, so long as it arrives by Election Day, or can drop it off at any one of dozens of voting centers.

People can also vote in person, but fewer than 6 percent of voters do so in a typical election, said Amber McReynolds, the former head of elections in Denver, who now runs Vote at Home, an advocacy group. The atmosphere at Denver polling places yesterday, she told me, was “calm as can be.”

Hawaii, Oregon, Utah and Washington also created universal vote-by-mail systems before the pandemic struck. In all these states, turnout has increased, with no net benefit for either party. Many other states are trying to expand mail voting this year, although often without universal mailing of ballots or as many drop-off locations as Colorado has.

In other political news:

The United States announced more than 48,000 new coronavirus infections yesterday, another daily record and an increase of 80 percent in the past two weeks. Dr. Anthony Fauci, the nation’s top infectious disease expert, warned the Senate that the number could soon reach 100,000 a day if the country does not act quickly.

2. A divide among airlines

American Airlines will begin filling its planes to capacity again today, joining United Airlines, which was already doing so. The other two largest U.S. carriers — Delta and Southwest — have committed to keeping some seats empty through September.

It’s still not clear how easily the coronavirus spreads on airplanes: They have better air circulation than typical indoor spaces, but people can be packed tightly. For that reason, some epidemiologists are worried that American and United are prioritizing profits over safety.

“From an economic standpoint, it makes perfect sense,” Janet Baseman of the University of Washington School of Public Health told me by email. “From a public health standpoint, it is problematic because there is no hope of physical distancing.” She added: “If I were to hop on a plane (which I will not be anytime soon unless it is absolutely necessary), I would choose a carrier that would allow more space.”

The list of recent Russian aggressions is reminiscent of the Cold War, David Sanger and Eric Schmitt write. In addition to the bounty program on U.S. soliders in Afghanistan, there have been cyberattacks on Americans working from home and Russian jets flying off the coast of Alaska to test air defenses.

A family’s perspective: “If it does come out as true, obviously the heartache would be terrible,” said the father of a Marine who was killed last year in an attack that may be related to the bounties.

For more: On today’s episode of “The Daily,” one of the reporters who broke the news of the program discusses what we know now. In Opinion, Susan Rice, the former national security adviser, asks, “Why does Trump put Russia first?”

4. A chilling effect in Hong Kong

China’s crackdown on Hong Kong has already begun to have an effect, with several major pro-democracy groups disbanding on the same day that Beijing passed a new security law. “Hong Kong people understand this means the end of the ‘one country, two systems’ model for the territory, and we are now reduced to being a city like on the mainland, like Shenzhen or Shanghai,” Joseph Cheng, a political scientist, told The Times.

The next step? People in Taiwan fear that China’s move against Hong Kong does not bode well for them, The Times reports from Taipei. “There is a high possibility of conflict,” a worried Taiwanese lawmaker said.

IDEA OF THE DAY: Black and white

The Times will not be capitalizing the word “white.” As Dean and Phil explained: “There is less of a sense that ‘white’ describes a shared culture and history. Moreover, hate groups and white supremacists have long favored the uppercase style, which in itself is reason to avoid it.”

In The Atlantic, the philosopher Kwame Anthony Appiah has argued for capitalizing both “Black” and “white.” Neither is a literal description of skin color, he writes, and neither is a “fully formed and stable social category.” Both encompass a varied group of cultures.

Citing the work of Sally Haslanger, a fellow philosopher, Appiah concludes: “Racial identities were not discovered but created, she’s reminding us, and we must all take responsibility for them. Don’t let them disguise themselves as common nouns and adjectives. Call them out by their names.”

More on race: The Pulitzer Prize-winning writer Isabel Wilkerson compares American racism to the Indian caste system in a new article for The Times Magazine. “Their hierarchies are profoundly different. And yet, as if operating from the same instruction manual translated to fit their distinctive cultures, both countries adopted similar methods of maintaining rigid lines of demarcation and protocols,” she writes.

With the long weekend approaching, you may be itching to bust out the grill. Melissa Clark’s recipe for chicken thighs — coated in a balsamic vinegar glaze and spiked with ginger — is the perfect solution. The charred peaches glazed with honey butter work just as well as a dessert as they do a side dish.

Down to Gorky Park

If you’re of a certain age — say, between 40 and 60 — you may need to hear only a few bars of the whistling at the beginning of the song to recognize it: “Wind of Change,” a 1990 hit by the German heavy-metal band Scorpions. It turned into an anthem for Eastern Europeans welcoming the end of the Soviet Empire.

The journalist Patrick Radden Keefe has long been obsessed with a rumor that the C.I.A. wrote the song, and he chases it down in an eight-episode podcast. The full podcast is now available, and I recommend it. It’s full of entertaining mini-histories of spying, diplomacy and pop music. “On the one hand, this is an investigative story about Cold War espionage, but on the other hand, it’s about these ’80s hair-metal guys who are inescapably absurd,” Keefe told my colleague Hilary Moss.

Return of the Kentucky elk

In 1997, on the grassy slope of a reclaimed mine, an elk stepped onto Kentucky soil for the first time in more than 150 years. Though the area was once full of wildlife, land development and hunting eliminated many buffalo, river otters, bald eagles and elk.

Read about how the state rebuilt its elk population, using old coal mines.