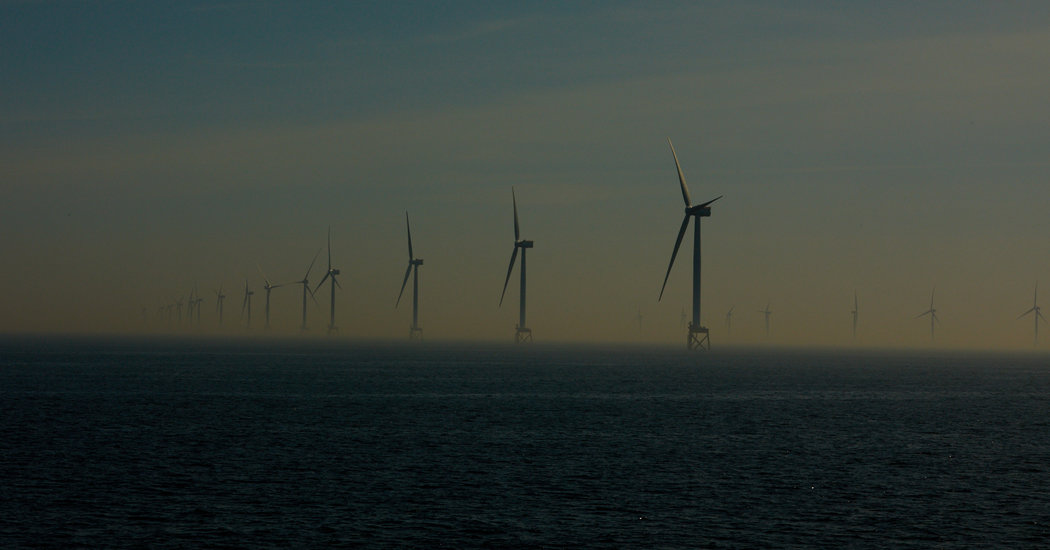 After a two-hour boat trip from Lowestoft, a seaside town on the east coast of England, giant wind mills more than 500 feet high loomed out of the mist like enormous sea creatures. High atop the towers, technicians in helmets and red-and-black protective suits were visible, fine-tuning the machines and hooking them up to the British power system.

Britain has been under various stages of lockdown since March, but work on this wind farm, called East Anglia One, has charged ahead.

But early on, the companies behind the 2.5 billion pound ($3.1 billion) project weren’t so sure.

As the coronavirus was gathering momentum across Europe, managers called a one-day halt in late March to consider whether pushing forward made sense. New health and safety measures would inevitably drain resources.

“We had to do a check and say ‘OK, should the project continue?’ and we asked ourselves with a very open mind,” said Charlie Jordan, the project director for Iberdrola, the Spanish utility developing the project.

The answer was “yes.” Work resumed the next day, and hasn’t stopped.

The fallout from the coronavirus pandemic has many businesses reeling, and the oil and gas industry in particular has been rocked by plummeting prices that have forced it to drastically cut production and lay off workers.

But producers of clean energy are pushing hard to get their projects up and running. They want to start making money on their investments as soon as possible, and while demand for electricity has been reduced by the impact of the virus, renewable power tends to win out over polluting sources in electricity systems because of low costs and favorable regulatory rules.

While crews fixed the huge turbines to the seabed off the English coast in April, Iberdrola began producing power from what it says is Europe’s largest solar energy facility, in western Spain.

Mr. Jordan, the offshore project manager, said that he and his colleagues figured that they could take steps to keep risks under control. Among other things, contractors rented holiday cabins and reached agreements with hotels near Lowestoft, the operations base, so that they could house some of the offshore workers there and keep them isolated. Workers were taken out by boats to the wind farm for 12-hour day and night shifts.

So far, no one working on the project has become ill with the coronavirus, according to Mr. Jordan.

All of the 102 turbines are now installed in an area about 25 miles off the coastline. The nearly 250-foot blades on top of these monsters can spin out enough power to supply around 600,000 homes, according to the company.

Demand for the equipment for these projects is putting pressure on makers of gear to keep their factories churning. Vestas Wind Systems, for instance, is striving to keep a global network that includes plants in Colorado, China, Denmark and elsewhere largely open to meet a record first-quarter order book of 34.1 billion euros for its giant electric power-generating windmills and services.

“We started out differently, saying ‘Let’s not use the excuse of Covid-19,’” said Henrik Andersen, the chief executive of Vestas, which is based in Denmark.

Vestas, too, points to a variety of measures it has taken to keep workers safe. At its factory in Denmark that makes nacelles, the chambers at the top of turbines, safety measures are visible, especially in the canteen. The meals now come on prepared plates rather than buffet style, and employees eat in shifts to reduce crowding. People sit diagonally across from one another at tables.

“It is strange having to keep distance to your co-workers when you are so used to being close,” said Julie Noesgaard, who packages parts for shipment.

The pandemic is certainly throwing up obstacles for these companies. Vestas said that in the first quarter matters like delays in obtaining components and changes in work procedures added €10 million or $10.8 million in costs, contributing to an €80 million loss. The company said it was suspending guidance for the year.

Markus Tacke, who until recently served as chief executive of Siemens Gamesa Renewable Energy, which made the East Anglia turbines, said during a call with reporters that the dire health situation in Italy and travel restrictions in India this year prevented him from signing two contracts, though he assumed the deals would be concluded later.

The green energy industry has bad memories of the financial crisis of 2008 and 2009, which proved to be a big setback. Vestas was forced into closing or selling a dozen factories and shedding a third of its work force as orders fell. Other manufacturers were similarly rocked.

Analysts say that while the renewables industry will not be immune to the effects of the pandemic, it is likely to fare better this time around.

“The outlook for renewables looks really quite resilient, despite all the Covid restrictions,” said Sam Arie, a utilities analyst at UBS, an investment bank. “We have seen a few companies with minor interruptions,” he added. “But relative to other sectors the impacts here have been very limited.”

The main reasons for the difference: Businesses have also consolidated, creating stronger players. Siemens Gamesa, for instance, was formed in 2017 through the merger of the wind interests of the German industrial giant Siemens with those of Gamesa, a Spanish company.

The industry has also continued to bring down costs. The turbines at East Anglia One are 15 times as powerful as those installed in the first offshore wind farms almost 30 years ago, and so they produce much more revenue per unit. In the United States wind power often ranks as the least expensive source of electricity, according to Supriya Subramanian, a UBS analyst.

Industry executives argue that renewable energy is now mainstream, not a fringe player, and this gives them a stronger chance of emerging from this crisis in better shape. When looking at options for electric power, a vital force for all economies, governments and other customers often favor green energy options not only to reduce emissions blamed for climate change, but also because they are often cheaper.

Demand for clean power is also expected to grow as electricity powers more manufacturing and transportation.

Low operating costs — wind and sunshine are free, after all — and prioritizing by some governments are key reasons that the International Energy Agency forecasts that these and other renewables will be the only energy sources that grow this year. The use of coal will take the steepest dive since World War II, the agency forecasts, contributing to an 8 percent drop in CO2 emissions.

Emissions also fell during the financial crisis, but bounced back. The question is whether the pattern will repeat itself. There is reason to calculate that the world economy that emerges from a deep recession could differ in terms of how it uses energy, the main source of emissions, from the pre-pandemic version. Working at home may prove to be a lasting habit for many, cutting down the use of gasoline-burning cars for commuting. And international travel may have lost its appeal for years.

“People are going to stay home or closer to home” until there is a vaccine for the virus, said Jan Freitag, a vice president at the travel consultants STR.

Faced with reduced demand for their products and rock-bottom prices, oil and gas companies are cutting back investment by about a quarter, or $110 billion, according to Rystad Energy, a consulting firm. Delays on investment decisions may favor wind and solar power because their costs are falling.

“The longer you wait, the more likely the decision is for renewables,” said Jarand Rystad, chief executive of Rystad Energy, a consulting firm.

Environmentalists say that the public has noticed the beneficial side effects of the pandemic and will want them to continue.

“People have experienced clear blue skies,” said Fred Krupp, president of the Environmental Defense Fund, “and want to find ways to keep them as we put people back to work.”