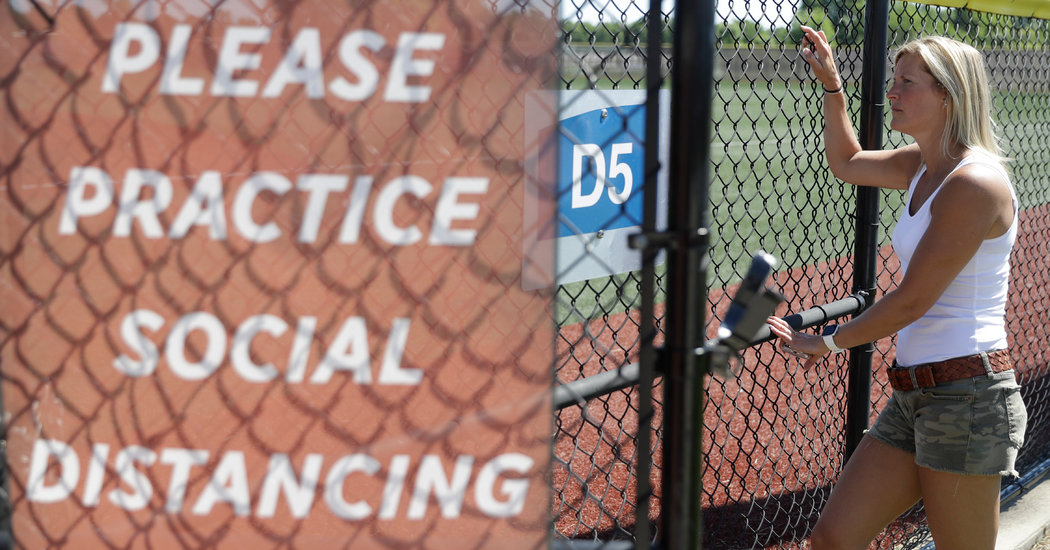 It sounded like a good idea. Bring sports back, carefully, slowly, with adequate precautions. So why does it seem to be going wrong in so many places?

As major North American sports are preparing to return, a close look around the world finds a slew of problems that even the N.B.A.’s 113 pages of protocols might not be ready for.

Some Schools Cancel All Fall Sports

College football is eternal, right? Well, maybe not. Williams and Bowdoin, small New England colleges that play in Division III, canceled fall sports. With fewer or perhaps no opponents available, rivals like Amherst, Wesleyan and Tufts may soon have to follow suit.

“Teams will be able to practice outside in small groups if they adhere to social distancing guidelines, and may progress to more gamelike practice activities if conditions improve,” Maud S. Mandel, the Williams president, said in a statement. But teams will not travel or compete against other schools. The statement continued, “Our decision has been guided by the utmost attention to safety protocols to ensure the health and safety of our athletes, coaches, staff and community.”

Big universities with their massive, profitable programs may not do the same. Still, there are worrying signs. Michigan, home of a 100,000-seat football stadium and a host of storied traditions and rivalries, is projecting a budget deficit. The university is expecting attendance to fall by 50 percent for the coming school year, said Warde Manuel, the director of athletics.

As a result, salaries will be cut on a sliding scale. Those making less than $50,000 a year will not be cut, but others will face cuts of 5 to 10 percent, with top earners like the football coach, Jim Harbaugh, and the men’s basketball coach, Juwan Howard, at 10 percent.

The sports-mad country of Australia was one that eagerly got its games going again. But it has had more than its share of pitfalls, with some athletes being fined for violating social distancing, others coming down with flulike symptoms and still others told to stay away from some states.

In the latest development, a game in the phenomenally popular Australian rules football league has been canceled after the state of Queensland denied a team entry into its state.

Richmond, from a suburb of Melbourne, Victoria, had been scheduled to travel to play West Coast in Queensland on Thursday. But Queensland has adopted strict rules for travelers from Victoria, requiring a 14-day quarantine, which would throw the entire league schedule into disarray.

Instead, Sydney, based in New South Wales, will now play West Coast this weekend, while Melbourne will take on Richmond. There are still more than 100 games to go in the resumed regular season, and conflicting state regulations may continue to tangle the schedule.

In England, where the Premier League has come back to life, there is an early snag. The Leicester area is under lockdown after an increase in coronavirus cases, with schools and shops being shuttered again. Leicester City is supposed to play Crystal Palace there on Saturday. The game is on for now, but neutral sites are being scouted just in case, and postponement is also a possibility.

Given that some states in the United States are also telling visitors to self-quarantine, it is an issue that may have an impact on the North American major leagues as well.

In other Antipodean developments, there was some good news for New Zealand … sort of. The rest of the 2019-20 rugby sevens series, the shorter, faster version of the game played in the Olympics, was canceled. The New Zealand men’s and women’s teams were in the lead, so they earn the trophies.

In the end, six of a possible 10 events for the men and five of eight for the women were staged before the pandemic. Events in Canada, England, France and Singapore and the most prestigious, the Hong Kong Sevens, will not be held this season.

Will things get back to normal in 2021 at least? Well, the men’s Africa Cup of Nations, the most important international soccer tournament on the continent, scheduled for January 2021, was pushed back to 2022 on Tuesday. And the women’s tournament was canceled entirely.