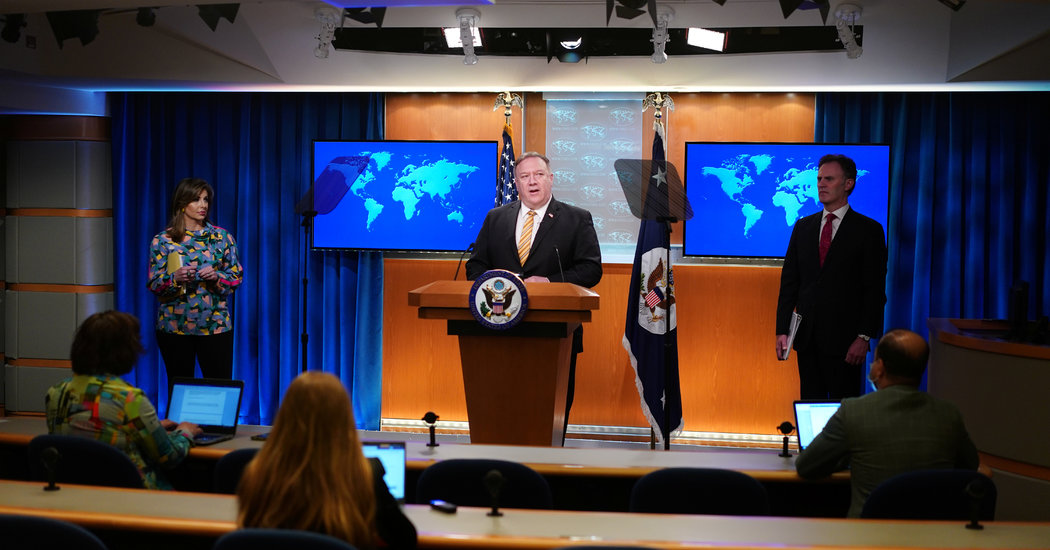 Secretary of State Mike Pompeo called on Tuesday for an arms embargo on Iran to be extended indefinitely, but his appeal fell flat at the United Nations Security Council, where Russia and China rejected it outright and close allies of the United States were ambivalent.

The embargo, which is set to expire on Oct. 18, stems from the 2015 deal to curb Iran’s nuclear program. President Trump withdrew from the agreement in 2018, and Iran has exceeded the accord’s limits on uranium enrichment since then, part of a steady escalation of tensions that have at times pushed the two countries dangerously close to war.

The American bid is all but certain to fail in the Security Council; it might not even collect enough support to be put to a vote, diplomats said. The Trump administration has threatened that if the embargo is not extended, the United States will try to invoke a “snapback” provision of the 2015 deal to reimpose former U.N. sanctions on Iran — a move other nations said would be unwise and legally invalid.

Representatives of Britain, France and Germany voiced unease at both the expiration of the embargo and the American approach, particularly the snapback, which they flatly opposed.

The European powers said they hoped to find some way to limit Iranian access to arms through a compromise negotiated in the framework of the 2015 agreement, not an action imposed by the Security Council.

The arms embargo applies to Iran importing or exporting most kinds of weapons, including aircraft and tanks. Some limits on missile and nuclear technology will remain in place for a few more years.

The resistance to Mr. Pompeo’s call — coming not only from only rivals like China and Russia, but also from key allies — illustrates the growing isolation and declining influence of the United States, analysts said, even in dealing with an Iran that members see as a rogue nation destabilizing the region.

U.N. officials presented findings that the missiles used in an attack last September on crucial Saudi Arabian oil facilities were made in Iran, as were weapons bound for Iran’s Houthi allies in Yemen that were seized by the U.S. Navy. The findings supported the conclusions of Western intelligence agencies.

“Iran is already violating the arms embargo, even before its expiration date,” Mr. Pompeo said in the Security Council meeting, which was held by video link. “Imagine if Iranian activity were sanctioned, authorized by this group, if the restrictions are lifted.”

“Iran will be free to become a rogue weapons dealer, supplying arms to fuel conflicts from Venezuela, to Syria, to the far reaches of Afghanistan,” he added.

Iran’s foreign minister, Mohammad Javad Zarif, dismissed claims of Iranian aggression based on what he called “self-serving allegations and forged documents,” adding that it was the United States that “has directly undermined global peace and security.”

Mr. Zarif began and ended his remarks by quoting Mohammad Mossadegh, the Iranian prime minister overthrown in a C.I.A.-orchestrated coup in 1953 — a nod to a long history of American intervention.

The meeting on Tuesday marked the first time since 2017 that Mr. Pompeo and Mr. Zarif had taken part in the same forum, if only virtually, but they did not appear together in the grid view of diplomats shown on the U.N. website. Mr. Pompeo left the meeting before Mr. Zarif joined.

Since leaving the nuclear deal, Mr. Trump has tried to cut off Iran from doing business with the rest of the world, threatening economic penalties for countries and companies that do not go along. Though most of the world opposes the American stance, much of it has complied.

Security Council members and U.N. officials chastised both Iran and the United States, urging them to return to compliance with the 2015 nuclear deal, the Joint Comprehensive Plan of Action, often referred to as JCPOA.

Some pinned the current crisis on Mr. Trump, saying that he had started a long series of provocations and retaliations by withdrawing from the agreement and imposing punishing economic sanctions.

“China opposes the U.S. push for extending the arms embargo on Iran,” said Zhang Jun, the ambassador from China — which, like Russia, France, Britain and the United States, has veto power in the council. China, Russia, Germany, Britain, France and the European Union are signatories to the 2015 agreement.

“Having quit the JCPOA, the U.S. is no longer a participant and has no right to trigger a snapback at the U.N.,” Mr. Zhang said.

The German representative, Christoph Heusgen, said he deplored Iran’s aggressions in the region and its human rights record at home, but he also endorsed the view that Washington had no standing to invoke U.N. sanctions.

“It is very unfortunate that the United States left the JCPOA, and by doing this actually violated international law,” he said.

Henry Rome, senior Iran analyst for Eurasia Group, said the meeting was “another vivid illustration of Washington’s isolation on the Iran issue — as well as its failure over the past three years to persuade any other signatory of the deal to back its approach.”

In the meeting, Rosemary A. DiCarlo, the U.N. under secretary general for political affairs, detailed evidence that arms and weapons parts involved in the U.S. Navy seizure and the oil field attacks were Iranian-made. She added that Iran has begun to violate the nuclear agreement in surpassing limits to its uranium enrichment, a potential step toward being able to produce a nuclear weapon.

But Ms. DiCarlo, an American citizen, cited “divergent views” on whether Iranian rockets, launched in February and April, could carry a nuclear warhead, as the United States has claimed.