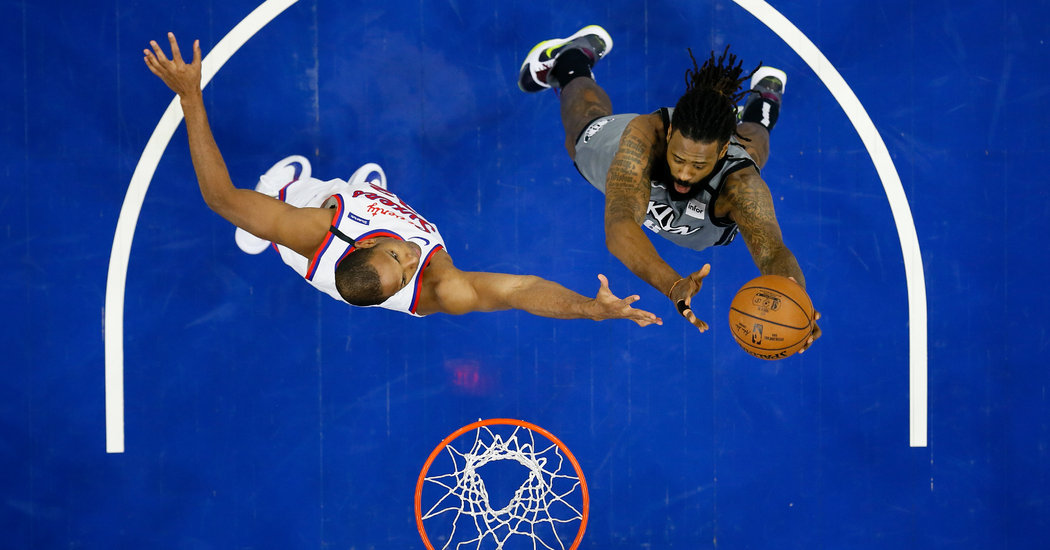 Spencer Dinwiddie and DeAndre Jordan, key members of the Nets, both said on Monday night that they had tested positive for the coronavirus since returning to Brooklyn for individual workouts last week.

Jordan, who has asthma and has battled multiple cases of pneumonia in his 12-year career, announced on Twitter that he would not participate in the N.B.A. restart, which is scheduled to begin soon at Walt Disney World near Orlando, Fla.

Dinwiddie, who averaged 20.6 points and 6.8 assists per game in what had been a breakout season, followed up Jordan’s tweet with one of his own, saying he still hoped to play in Florida but adding that “unfortunately I have been one of the cases that has various symptoms.”

It was not immediately known if the Nets’ practice center would remain open, which teammates and team staff members Jordan and Dinwiddie had worked with, or if the club’s plans to participate in the N.B.A.’s 22-team return were in jeopardy because of the lost manpower. The Nets declined to comment on Monday night.

As recently as Friday, both Adam Silver, the N.B.A. commissioner, and Michele Roberts, the executive director of the National Basketball Players Association, had expressed relief that only 16 of a group of 302 N.B.A. players had tested positive for the coronavirus on June 23.

Provided that the Nets’ outbreak is an isolated case that does not jeopardize the league’s comeback plans at large, what’s clear is that the Nets would not be close to full strength should they leave for Florida as scheduled on July 7. In addition to Jordan, two more former All-Stars — Kevin Durant (Achilles’ tendon tear) and Kyrie Irving (shoulder surgery) — are still rehabilitating from injuries and have both said they will consider not playing even if they are healthy. The Nets also lost the rookie forward Nicolas Claxton and the veteran forward Wilson Chandler before losing Jordan and potentially Dinwiddie.

Claxton had a season-ending operation on his left shoulder last week. Chandler elected over the weekend not to play, citing family reasons and concern about the virus. The Nets have already signed the veteran guard Tyler Johnson and plan to sign Justin Anderson to replace Chandler on Wednesday. The next to be signed is likely to be a big man who can step in for Jordan.

The Nets, at 30-34, were seventh in the Eastern Conference when the season was suspended on March 11 in response to the coronavirus outbreak. They are a half-game up on No. 8 Orlando and six games up on 10th-seeded Washington. But the Wizards can force a play-in round for a playoff spot if they finish within four games of the eventual eighth seed in the East after every team plays eight games.

A potential consolation for the Nets is the ability to retain their first-round pick in the Oct. 15 draft if they miss the postseason. The pick would go to the Minnesota Timberwolves if the Nets held onto a playoff spot under interim coach Jacque Vaughn, whose first move after replacing Kenny Atkinson on March 7 was moving Jordan into the starting lineup.