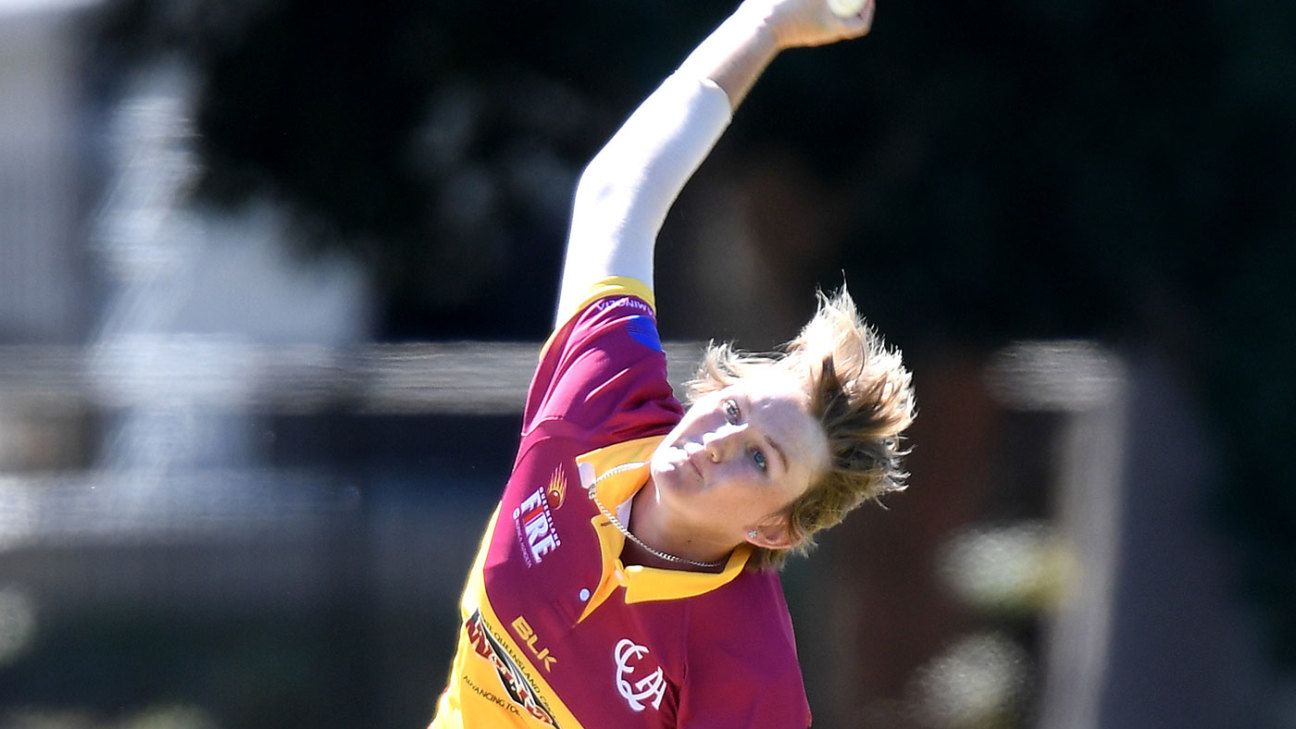 Across the space of three days in 2011 playing for Queensland, Sammy-Jo Johnson dismissed Alyssa Healy twice.

It wasn’t long after she had been told there wasn’t a place for her with New South Wales. Now, nine years later, the stars have aligned to bring her back to Sydney as she pushes her case for Australia selection.

Her partner, Brian, found work in Sydney and after he had done so much to support Johnson’s career, it was a chance to repay the favour. And it just so happened that New South Wales had vacancies in the pace department following the retirements of Rene Farrell and Sarah Aley.

“As a young teenager the dream was to play for the [NSW] Breakers,” she told ESPNcricinfo. “I don’t think I’ve really come to terms with it. I don’t regret playing for Queensland; I’ve loved the opportunity, I’ve had nine years and they’ve helped me become the person I am today. I wouldn’t be where I am without Queensland Cricket. But it is nice to come back – this was a dream, now I get to do it when I’m at the top of my game and hopefully, it might give me a chance to put on that green and gold shirt.”

ALSO READ: All the Australian state squads for the 2020-21 season

However, the journey has been far from easy. Her father died in 2012, there followed two years where she didn’t represent Queensland and jobs were lost, leaving the battle to scrape together a living and find somewhere to live. It appeared as though the cricket career could fade away.

“You come across adversities – everyone goes through different things – and experiencing what I did at the ages I did has made it so much easier when you are in a professional environment, because you know when you have a bad day. I’ve always got the outlook that there is more to life than cricket, but you enjoy it while you can,” she said. “Every day I get to put on the kit of whatever team I’m playing for, I just enjoy it, have fun. I’m a pretty laid-back person. I’ve also said it’s not a right, it’s a privilege to put on a shirt and that’s what I live by.

“Early doors I thought this is awesome – I want to play for my country – then life hits you smack bang in the face and you go, ‘hang on, am I good enough?’ You go through some ups and downs, start second-guessing your skill. I was driving three-and-half hours each way from Lismore to Brisbane three times a week to train, off the back of not a lot of money in women’s cricket. The love and passion for the game is what drives most of us, because anyone [of] my age realises it’s not about the money. We do it because we love the game and play with our mates.”

Johnson has pushed hard for that international debut over the last two years, earning regular Australia A selection and performing impressively for the Brisbane Heat in the WBBL. Where she plays her Big Bash cricket next season still remains to be confirmed due to the contract embargo currently in place, but her last two summers have brought 38 WBBL wickets while in 2018-19, she also hit 260 runs at a strike-rate of 139.78.

“My first [Australia A] tour was to India so that was very eye-opening,” she said. “I was actually very nervous because I’d never been to the subcontinent. You start second-guessing yourself a little – am I fit enough, am I strong enough? – but I played really well, and really enjoyed the experience. That set me up for WBBL 4. I just had self-belief and it’s funny what a bit of self-belief can do for you.”

Last year, Johnson closed up the gardening business she co-owned so she could focus more on her cricket and that international ambition. She is currently employed part-time with Rebel Sport, a job that allows her the freedom to focus on training and playing when needed.

“Trying to play cricket at this level, traveling, touring, it got too hard trying to run the behind the scenes stuff,” she said. “If I really want to give playing for Australia a red hot crack, I needed to commit those extra hours that I’m spending on paperwork and admin, into recovering and making sure I’m ready for my next session or game.

“I think [Australia] is the hardest team in the world to get into at the moment because they are so successful and everyone plays their role. You don’t want people to get injured, but I feel like it’s your only foot in the door at the moment – which is good because you want that competition. If I can keep churning out consistent performances with the ball and bat I’m hoping going to give the selectors no reason not to pick me.”

However, there is another challenge to moving to the next level: playing enough cricket. That is particularly relevant approaching a 50-over World Cup, which is due to take place next February and March in New Zealand, with the Women’s National Cricket League consisting of eight round-robin matches per team and a final. In May, when domestic cricket was briefly threatened with cuts amid Cricket Australia’s problems, Australia’s wicketkeeper Healy spoke out about the imbalance in the game, and Johnson believes the WNCL should be expanded to a full home-and-away season campaign of 12 matches.

“We train for so many months of the year and we’ve only just got to eight WNCL games,” she said. “Myself and all the players in other states want to be playing more cricket. The WBBL is fantastic, I think we have the right number of games for that and it now has its own window. I hope off the back of the T20 World Cup final that women’s cricket will only get bigger, but for the young kids coming through it’s not just about 20-over cricket. There’s a one-day World Cup next year and we need more 50-over cricket so the girls can continue to show their skills to put pressure on for the Aussie team.”

Come the new season, Johnson will be taking every chance she has to do just that.