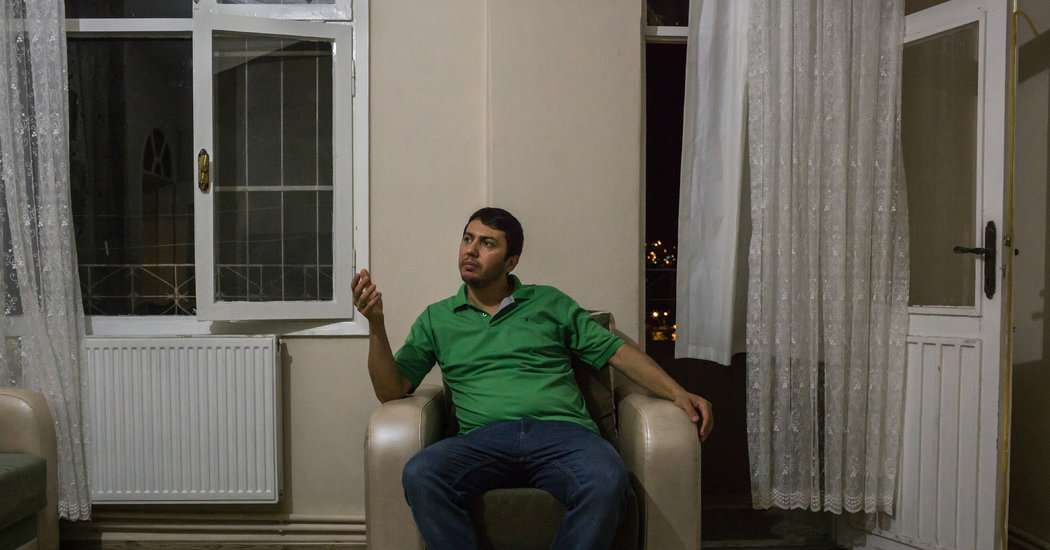 ISTANBUL — An American NASA scientist returned with his family to the United States early Tuesday morning after nearly four years of imprisonment and house arrest in Turkey, and more than seven months after President Trump said he had secured an agreement for his release.

The scientist, Serkan Golge, arrived in Washington on a commercial flight shortly after midnight, ending a tortuous journey for him and his family, who had become caught up in increasingly fraught Turkish-American relations.

Mr. Trump’s public dealings with President Recep Tayyip Erdogan of Turkey have run a roller coaster from warm expressions of friendship to explosive threats on Twitter to ruin the Turkish economy.

At a White House briefing in November with Mr. Erdogan, Mr. Trump announced that Mr. Golge would be heading home and personally thanked his Turkish counterpart for releasing Mr. Golge from detention, though he remained under judicial control for several more months.

Mr. Erdogan did not mention Mr. Golge in his comments at that news briefing.

Mr. Golge’s case, along with those of an American pastor, Andrew Brunson, who was held for two years, and three Turkish employees of U.S. consulates, one of whom was sentenced to more than eight years in prison this month, have been seen by U.S. and European officials as a form of hostage-taking for leverage.

Mr. Erdogan’s government has wanted several court cases in the United States against Turkish officials, potentially implicating Mr. Erdogan and his family, to be dropped. One such case, involving a state-owned bank accused of helping Iran evade sanctions, is still pending.

Ties between the United States and Turkey, ostensibly NATO allies, have been badly frayed since an attempted coup against Mr. Erdogan in July 2016. Among those involved in the coup were followers of a U.S.-based Muslim preacher, Fethullah Gulen, whom the Turkish government describes as the main instigator, and it has demanded his extradition, so far to no avail.

Turkey then went ahead last year with the purchase of a Russian antiaircraft missile system, despite NATO warnings that operating such a system was incompatible with membership in the alliance. Mr. Trump responded by canceling the sale of advanced F-35 jets to Turkey.

The relationship reached a new low in October, with Mr. Erdogan’s invasion of northeastern Syria, an offensive against U.S.-backed, Kurdish-led forces that risked direct conflict with American troops and threatened to undermine the fight against the Islamic State.

None of those issues were resolved in the talks in November, leaving the release of Mr. Golge as the only concrete achievement of the meeting.

Mr. Golge was one of up to 20 American citizens who have been imprisoned or prevented from leaving the country in a crackdown by the Turkish government after the failed coup. More than 100,000 people in total were detained, some for direct involvement in the coup but many more on the flimsiest evidence, accused of involvement with Mr. Gulen’s movement.

Mr. Golge, 40, a naturalized U.S. citizen, holds a Ph.D. in physics from Old Dominion University. He lived near Houston and had worked on preparations for NASA’s Mars mission.

He was detained in July 2016 while visiting his parents in southern Turkey and was accused of being a member of the Gulen movement — he insists he is not — which the government calls a terrorist organization.

The only evidence of that association that was produced at his trial was that he had held an account at Bank Asya, which was linked to the movement, and that a $1 bill was found in his parents’ house, supposedly a secret sign of membership.

Mr. Trump had been pushing Mr. Erdogan for Mr. Golge’s release for more than a year. He was sentenced to seven years imprisonment for terrorism charges, but was released from prison in May 2019. Mr. Trump announced then that Mr. Golge was being moved from prison to home custody and would be allowed back to the United States “pretty soon.”

But Turkish officials reacted to that statement by increasing judicial controls concerning his house arrest, according to Mr. Golge. Police officers in a parked car were posted outside his home around the clock for two weeks and followed him whenever he stepped out.

He was fitted with an electronic ankle bracelet to monitor his movements and had to sign in at the local police station four times a week, a regimen that was later reduced to twice and then once a week. Mr. Golge’s case is still pending a final appeal at Turkey’s Supreme Court.

Turkish law enforcement officials removed his ankle bracelet hours before the news briefing with Mr. Trump and Mr. Erdogan at the White House in November, but gave no indication why, Mr. Golge said.

“I was surprised,” Mr. Golge said on hearing Mr. Trump’s announcement. But his ordeal was not over.

The last judicial controls were only finally lifted in April, and international flights, grounded because of the coronavirus pandemic since March, only resumed this month.