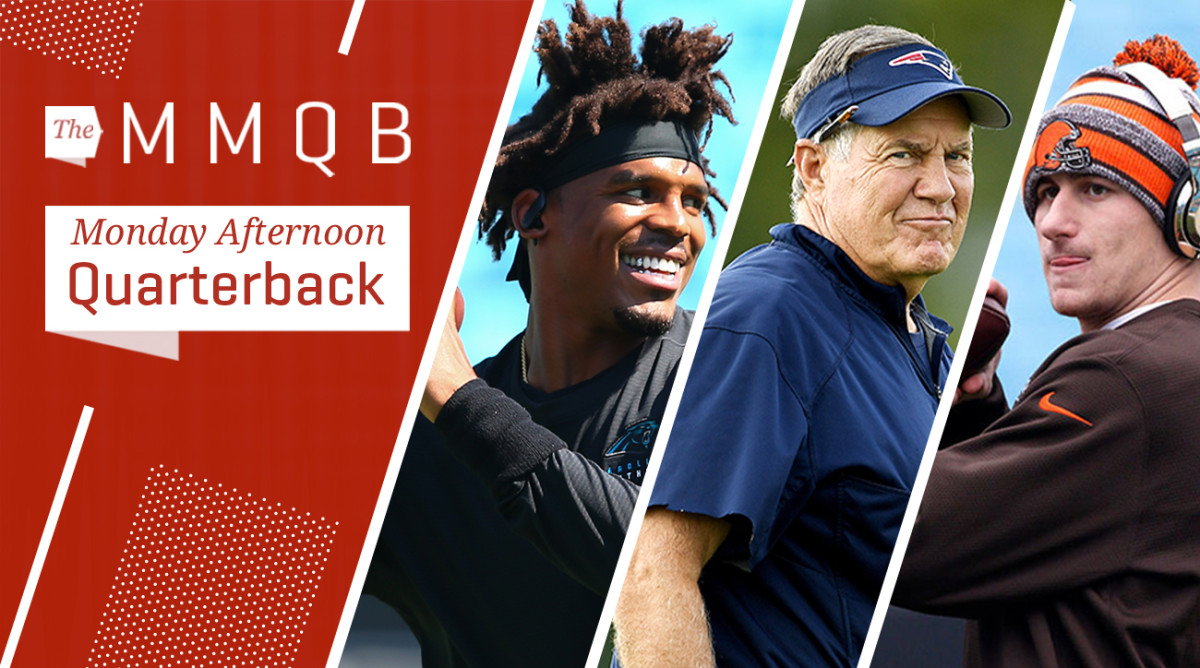 Camp opens for most teams a month from yesterday. Or at least it’s supposed to. Here’s what we’ve got for you this afternoon. …

• Someone who has worked in New England made a pretty interesting point to me about the Cam Newton signing, as it relates to Bill Belichick’s brand of logic. He told me that in 2011, Belichick told everyone that the one thing that would kill the team early on, post-lockout, was being out of shape, and giving up big plays as a result of it. This guy then said, regarding Newton, “So what better way to pressure on a tired defense than have Cam back there?” And then there’s this—if the Patriots feel like they needed to be a little simpler to play fast on offense, Newton can facilitate that in allowing New England to build more off its run game. Now, I think the primary reason to sign here is giving yourself multiple shots at getting the quarterback position right, post-Tom Brady, and the signing absolutely fits Belichick’s pattern of buying low on prodigious talents (Randy Moss, Corey Dillon, Chad Ochocinco, Albert Haynesworth, etc., etc.) But the stuff specific to 2011 sure is a nice side benefit.

• I also think the contract terms Newton agreed to say more about this offseason than anything else. Spending is always craziest over the first wave of free agency. After that, there were a pretty high number of high-profile quarterbacks available—Andy Dalton, Joe Flacco and Jameis Winston among them—who were waiting for a market out that never heated back up for them. Guys like Teddy Bridgewater, Nick Foles and even Chase Daniel benefitted from coming off the market early on, while the market was hot. After that, the reality became clear, and that’s that for the first time in forever quarterback supply overwhelmed quarterback demand.

• One addendum to my MMQB take on the Patriots’ penalties for their media crew videotaping the Bengals’ sideline—that third-round pick they lost is significant, and because of more than just the blown draft capital. New England was cooperative and apologetic about the violation, but had hoped it would be assessed as a non-football misstep. The inclusion of the draft-pick penalty is the NFL implicitly holding Patriots football ops accountable.

• With the NFL football ops tweeting out July 28 as the start date for training camp, it’s worth noting that the Chiefs and Texans open earlier—the rule under the new CBA is teams can start 47 days before their opener. Since Houston and Kansas City are playing in the kickoff game, both will start camp on July 25. The Texans are welcoming in their rookies on July 18, and have the quarterbacks coming in on July 20. Chiefs QBs and rookies report on the 22nd.

• I’d love more from Colin Kaepernick on 2015-17 in his new Netflix doc, but it doesn’t sound like that’s going to be a part of it. He’s got an executive producer credit in the announcement, which means if he wants to keep that stuff out of there, that stuff will be kept out of there.

• Johnny Manziel told the Lubbock Avalanche-Journal that, for him, he views football as “in the past.” And that’s too bad. It’s been lost in the mess his life became, but Manziel was electric as a player and competitor, and he’s still just 27 years old. Because he was such a unique player, I always thought Doug Flutie was a good comp for him. It’s a shame we never really saw what he might’ve become over time.

• Bucs LB Shaq Barrett told SiriusXM radio Monday that he plans to sign his franchise tender if he doesn’t get a long-term deal by the July 15 deadline, and that raised an interesting X-factor for the others tagged but still unsigned—Bengals WR A.J. Green, Chiefs DT Chris Jones, Jaguars DE Yannick Ngaukoe and Broncos S Justin Simmons. Given all of the COVID-related issues, would it make sense for those guys to stay away until Week 1 to avoid getting infected, or being around those who come in with the virus? I think it’s a sort of interesting question, given the likelihood that some teams will have a significant number of cases through training.

• While we’re there, I thought Eagles OT Lane Johnson explained what players will be facing next month well: “Ultimately, it’s a risk that we’re all willing to take to go outside your house or whatever you’re doing, going shopping. I’ve been doing a pretty good job of staying in the house, doing my social distancing protocols. Yeah, with everybody it’s going to be a risk that we’re going to have to take and see what happens.” Really, it’s not unlike what many in America are facing (without the risk of having to physically run into your co-workers over and over again, of course).

• Just to update something we’ve been keeping an eye on, five of the NFL’s 32 first-round picks have signed. Last year at this juncture, 26 had signed. And there are veterans who still haven’t actually signed their deals either, because they can’t take physicals yet. Which, as you might imagine, has led some to be very careful about how they’re working out ahead of camp.

• All the best to long-time agent Paul Sheehy and his family. Per long-time Broncos beat man Mike Klis, Sheehy is battling COVID-19 and has been on a ventilator on Friday, which is another reminder of the seriousness of the virus, and the fact that we’re not nearly out of the woods with it yet as a country.