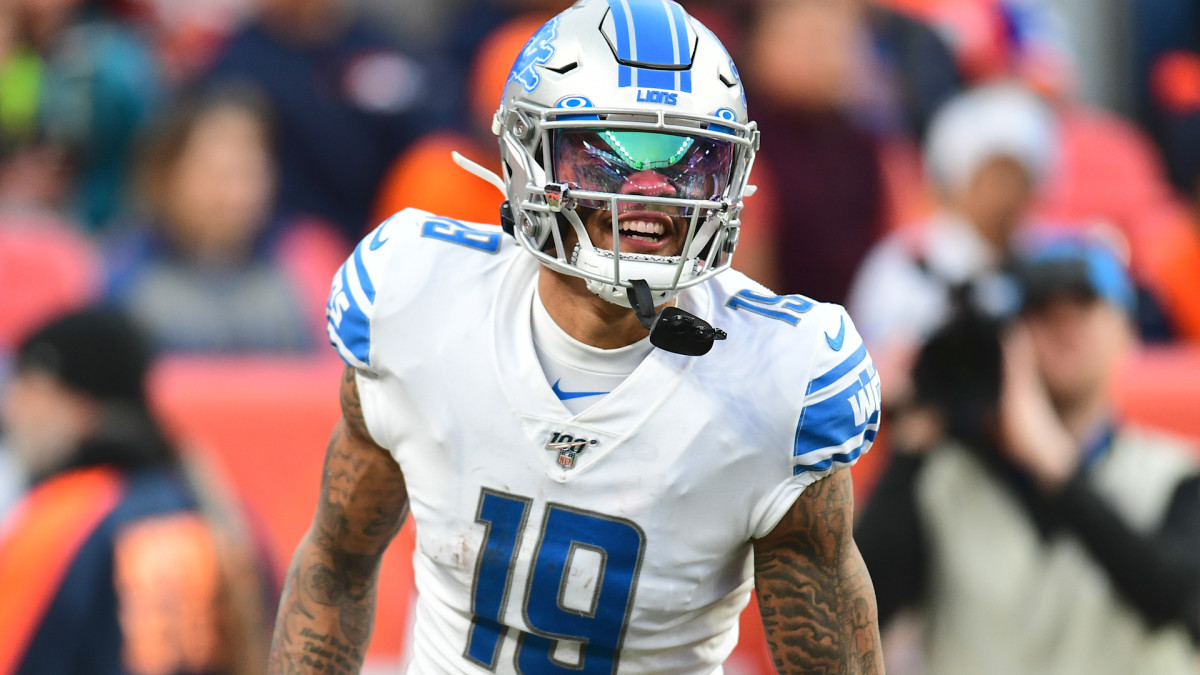 Detroit Lions wide receiver Kenny Golladay has surpassed the 1,000-yard receiving mark the past two seasons and has firmly entrenched himself as an elite wide receiver in the NFL.

The former Northern Illinois standout has become the top target of quarterback Matthew Stafford, with the two establishing themselves as one the league’s top offensive duos.

Golladay had four games with 23-plus PPR (points-per-reception) points with Stafford under center, while his production dipped to just one contest with more than 18 PPR points with the Stafford on the sidelines. If Stafford can stay healthy, Golladay should produce strong WR1 numbers once again in 2020.

The fourth-year wideout put up elite WR1 numbers in Weeks 6-9 with three 100-yard-plus receiving games. However, with Stafford out of the lineup, Golladay was only able to top the century receiving mark (158) once on Thanksgiving versus the Bears. Those stats were padded by a 75-yard touchdown grab on the opening offensive possession.

What Are the Oddsmakers Saying?

Fantasy owners have seen Golladay develop into the clear-cut WR1 in the Lions offense, and even though he finished as the overall WR9 in PPR formats in 2019, he could be in line for even bigger things in 2020.

Anchored by strong volume, the veteran wideout has seen steady improvement in one important area for fantasy owners: touchdowns. In his first three seasons in the NFL, Golladay has seen his touchdown production increase from three to five to a league-high 11 in 2019.

AllLions Maven Vito Chirco believes Golladay will not experience regression going into his fourth year in the NFL.

“If Golladay has a healthy Stafford throwing to him for a full season in 2020, he has a great shot at putting together consecutive double-digit TD campaigns.”

Based on where he was drafted last summer at the Fantasy Football World Championships (FFWC), Golladay rewarded fantasy owners in 2019; despite playing half of the season with Jeff Driskel and David Blough tossing the rock. If Stafford can remain healthy, and Golladay is able to play a full season alongside him, my model envisions a potential 70-plus reception campaign resulting in excess of 1,250 yards.

Back in May, Golladay’s receiving number stood at 1,175.5. However, following consistent steam on the under, the oddsmakers have been forced to adjust this number down by 75 yards. Bettors should not be worried about Marvin Jones, T.J. Hockenson or Danny Amendola biting into his expected volume in 2020. Jones, while a solid veteran presence, has seen two consecutive seasons shortened by knee and ankle injuries leading to just 22 games over that span.

I believe the steam is heading in the wrong direction, therefore lending extreme value to going over the erroneously lowered projection. This is a great buy-low investment for all sports bettors. Play this number over with extreme confidence.