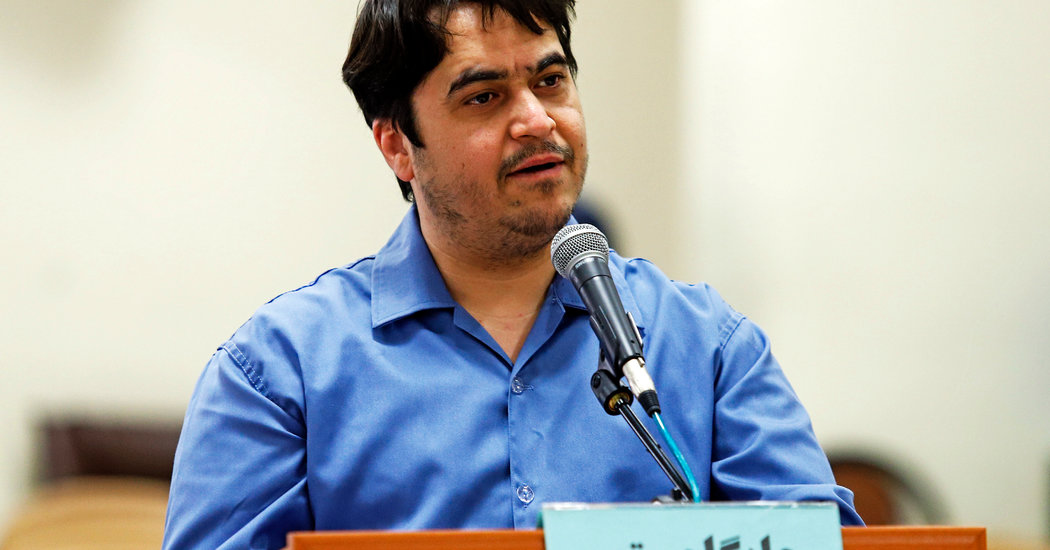 An Iranian opposition journalist who played an active role in widespread protests that engulfed the country in 2017 and 2018 has been sentenced to death, Iranian authorities said on Tuesday, months after he disappeared in neighboring Iraq and ended up in his home country under murky conditions.

The activist, Ruhollah Zam, was found guilty by a court in Tehran of “corruption on earth,” a term often used to describe attempts to overthrow the Iranian government, according to Gholam Hossein Esmaili, a judiciary spokesman who announced the death sentence at a news conference on Tuesday, Iranian news outlets reported.

Mr. Zam spent years exiled in France as a refugee before his sudden disappearance and detention by Iranian authorities. It was unclear when Mr. Zam was convicted, but the sentencing is the latest move by Iranian authorities cracking down on dissenting voices that have challenged its ruling elite.

Mr. Zam ran Amad News, a website and popular channel on the messaging platform Telegram, out of France, where he had lived since 2011 as a refugee. His Telegram account had more than 1 million followers, and he used it to post information about Iranian officials and share logistics about the protests that rocked the country.

Telegram shut down the channel at the request of Iranian authorities in December 2017, arguing that it incited violence by encouraging protesters to use Molotov cocktails during the demonstrations. Mr. Zam created a new channel, according to Reporters Without Borders, which Telegram refused to close down.

Mr. Zam is a divisive and controversial figure in Iran and in the broader Iranian diaspora. Reporters Without Borders said in a statement denouncing his sentencing that he had been accused of being manipulated by Iranian intelligence into publishing false information.

The 2017 protests were triggered by a jump in food prices and started in the city of Mashhad, where the country’s supreme leader, Ayatollah Ali Khamenei, was born. Initially led by disaffected young people in rural areas and towns, the protests soon grew to an anti-government movement that turned against the country’s entire ruling class and spread to dozens of cities, with some demonstrators calling for Mr. Khamenei to step down.

The Telegram messaging app played a major role as millions of protesters used its channels and groups to disseminate information and plan the protests.

Security forces swiftly cracked down on the protests, thousands were arrested and at least two dozens protesters were killed during one two-week period at the height of the unrest. Iran blocked the Telegram app in May 2018, but many in the country have circumvented the blockage by using virtual private networks, or VPNs.

Mr. Zam’s own story of how he ended up in Iranian detention in the first place remains murky. He left France on Oct. 11, according to the French foreign ministry. Iran’s Revolutionary Guards said days later that Mr. Zam had been arrested in a complex operation, according to Iranian news outlets. Mr. Zam’s wife, Mahsa Razani, who is still living in Paris with the couple’s child, said he had disappeared not long after arriving in Baghdad from Paris.

Reza Moini, head of the Iran-Afghanistan desk at Reporters Without Borders, said Mr. Zam was looking for funds to create a television channel and had been lured into a trip to Iraq to meet with Ayatollah Ali al-Sistani, an influential Shia cleric and Khamenei rival who could finance his media venture.

Mr. Zam had received various threats in recent years, Mr. Moini said, and until he left France, he was under police protection.

“Ruhollah Zam was publishing damaging information for Mr. Khamenei’s entourage,” Mr. Moini said. “He had been manipulated a few times by publishing erroneous information coming from the Revolutionary Guards, and he was desperately looking for funds.”

Iraqi intelligence sources said they had no information about his arrest and had not been involved in the operation.

Mr. Zam’s trial began in February, without a defense lawyer, according to Reporters Without Borders. He was accused of spreading propaganda against the Iranian regime, cooperating with the United States and spying for the Israeli and French intelligence services, among other charges.

Iran has long sought to silence opponents, both at home and abroad. In January, the country’s most famous rapper, Amir Tataloo, was detained in Turkey and faced deportation, but was ultimately released. In November, Masoud Molavi, an Iranian dissident who also ran a Telegram channel critical of the leadership, was shot dead in Istanbul in an operation orchestrated by Iranian intelligence services, according to Turkish officials cited by Reuters.

Mr. Esmaili, the judiciary spokesman, also said on Tuesday that an appeals court had upheld the sentence for Fariba Adelkhah, a renowned French-Iranian academic who was arrested in Tehran in June, 2019.

Ms. Adelkhah, whose detention has strained an already fraught relationship between France and Iran, was sentenced to five years in prison in May on national security charges, with an additional one-year jail term for disseminating “propaganda against the Islamic Republic.”

She will serve five years, Mr. Esmaili said, because she has already been in detention for over a year, according to the semiofficial Fars news agency.