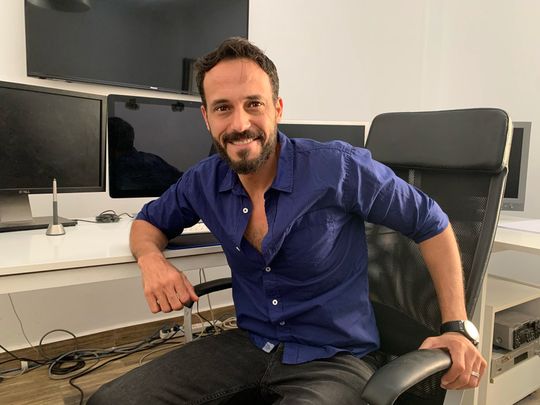 Youssef El Sherif, the Egyptian actor who starred in the sci-fi series ‘Al Nehaya’ (‘The End’) this Ramadan, has shot down false claims that he refuses to come into any contact with female actors on the sets of his films and TV shows.

The controversy began when fans questioned a particular scene in El Sherif’s latest series and felt that it did not make sense. A false claim emerged that suggested that El Sherif is against certain actions in his roles and that he includes these restrictions in his contracts.

El Sherif has now clarified that his contractual objections are specific to “steamy scenes”.

“The truth is there are extra rules that I place on myself, more than other people, even when it comes to contracts, it’s true. But this has been the case for 10 years or more,” said El Sherif in an interview with TV presenter Ramy Radwan.

“I don’t feel comfortable at all, or find it to be right for me, to have ‘steamy scenes’, for example, with kissing or holding. I don’t feel like it’s right from my point of view, I enforce this in my life and on myself only,” he said.

El Sherif, who is married to author Engy Alaa, said he initially faced problems when he attempted to enforce these boundaries without including them in his contracts. He called it an issue of personal freedom and that it did not have to be forced upon others.

He added that many of his actor friends do not follow the same rules and he does not mean any disrespect towards them, nor does he claim to be morally superior.

However, El Sherif’s words have since been twisted and both he and reporter Radwan have spoken out.

“Some newspapers have quoted Youssef El Sherif in my interview saying, ‘I put provisions in my business contracts to refuse to come into contact with women.’ The truth is the context of the quote was about him refusing ‘steamy scenes’ in his work an he explained what he meant by that in the interview,” said Radwan.

El Sherif retweeted the journalist’s post and added his own two cents.

“I don’t know how the phrase ‘steamy scenes’ turned into ‘contact with women’ in general we have to assume good intentions,” wrote El Sherif.

He added that the scene in question, which began this whole discussion, had nothing to do with his statements in the first place.

“Imagine that all this controversy is over a claim from a false account. They lied and believed their own lie,” he wrote.