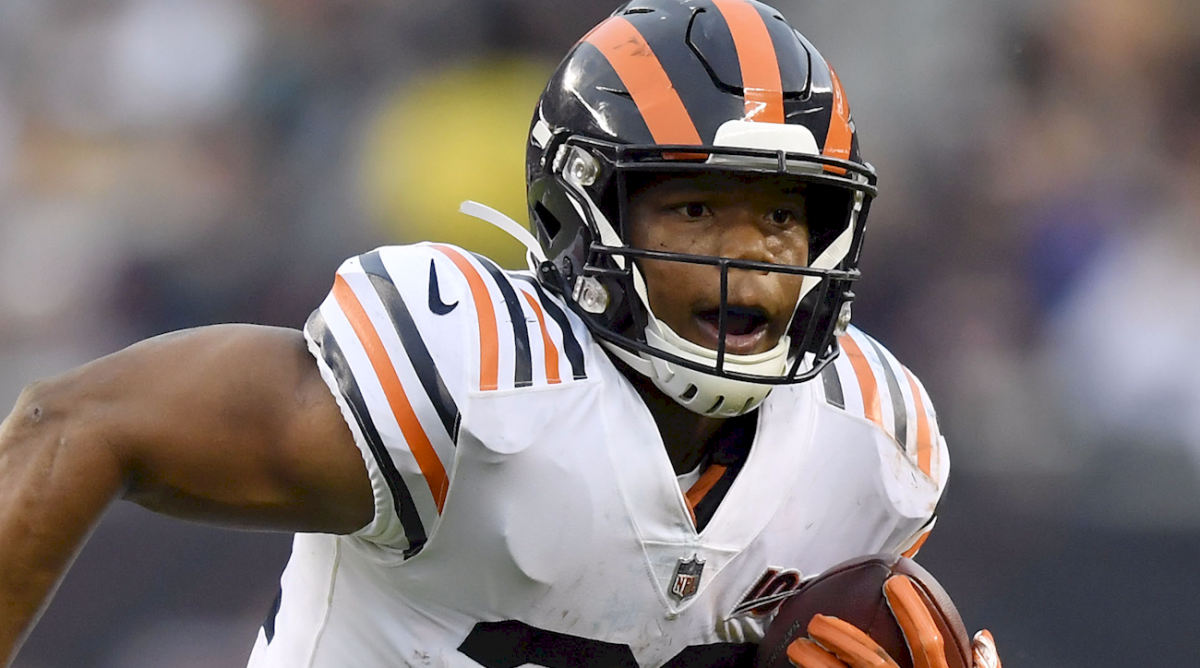 It’s never too early to start your fantasy football research, and we at SI Fantasy want to provide you with the best information possible heading into your drafts. Our “Draft or Pass” video series takes a closer look at a fantasy player that will be debated often leading up to fantasy drafts. Are our hosts targeting this player specifically? Are they avoiding him entirely?

I’m still slowly recovering from the overdose of David Montgomery Kool-Aid that I endlessly consumed in the summer of 2019.

The Bears were coming off a 12-4 season in which Mitchell Trubisky took a significant leap in Year 2. If not due to a 43-yard field goal somehow meticulously flailing off both an upright and crossbar, the Bears may have been on their way to an NFC Divisional Round matchup with perhaps a Super Bowl appearance in their sights.

After Jordan Howard failed to rush for over 1,000 yards for the first time in his career, in Round 3, the Bears traded up to get their guy: a stud running back out of Iowa State University who set college records in Pro Football Focus’ “missed tackles” metric.

The Bears were returning all five starters to the offensive line, and were even considered to have PFF’s second-best pass-blocking efficiency, with “no real weak link.”

Plus, their kicker woes had been solved with a full systems go kicking competition. Crisis averted, right?

Unfortunately, both Trubisky and the Bears offensive line regressed to one of the worst in football. And their newfound star rookie running back never was given an opportunity to get into a rhythm all season.

The Bears ran the ball just over 40.5-percent of the time, compared to passing 59.5-percent in 2019. If your quarterback is Patrick Mahomes or Matt Ryan, that’s completely logical with weapons galore and an offense needed to carry the load. The Bears were the complete opposite. They ranked in the bottom seven in nearly every single offensive category, while conversely were a top-10 defense for much of the year.

Over at Bear Digest, Gene Chamberlain discussed how the new coaches in Lazor and Castillo are already making plans to get the running game back on track:

“Juan and I have had conversations already about the formations we would like to use in the run game for our opening game of the season,” offensive coordinator Bill Lazor said. “It’s our job when your title is coordinator; you have to make sure it all fits.

“You have to make sure the run game, the pass game, the play-action, the drop-backs, the screens, they all fit.”

Montgomery left much to be desired in his actual performance, running for just 793 yards on 3.7 yards-per-carry. The passing game targets that were hyped up never came his way, catching only 23 receptions on 33 targets. The offensive line was an issue, but he also needs to improve.

And yet, he still finished with over 1,000 total yards, seven touchdowns, and is likely to expand his role in 2020. Montgomery also finished with the sixth-most inside-the-five carries amongst all RBs a season ago, leading to golden opportunities to add points to the scoreboard, both in the game and for our fantasy teams.

I still believe Montgomery is worthy of the potential star they reached up in the third round to draft, but there needs to be a far greater emphasis on maximizing efficiency in the running game.

In a 12-team PPR, Montgomery’s ADP lands at RB25, landing in the middle-to-late fifth round at 56 overall.

The Bears have a ways to go to earn the benefit of the doubt for last season’s offensive regression, particularly in the running game. But there is no other running back in this range that will command the type of touches and volume expected to be carried out by Montgomery here. With a three-down opportunity and an expanded role in the passing game, he’s an outstanding buy-low target at this ADP, and I’ll absolutely be taking him.

Oh, and pass the Kool-Aid one more time? I think I’m ready to start drinking again.