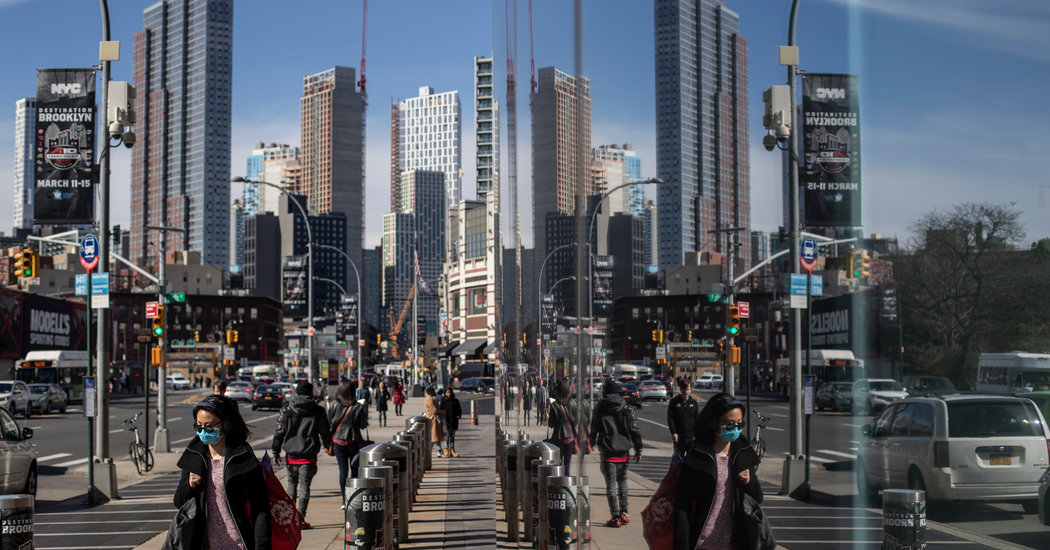 A new study offers the first physical evidence that the coronavirus was circulating at low levels in New York City as early as the first week of February.

The city confirmed its first infection on March 1. Mathematical models have predicted that the virus was making its way through the city weeks before then, but the new report is the first to back the conjecture with testing data.

The study found that some New Yorkers had antibodies to the virus as early as the week ending Feb. 23. Given the time needed to produce antibodies, those people were most likely infected with the virus about two weeks earlier.

“You’re probably talking about very early in February,” said Florian Krammer, an immunologist at the Icahn School of Medicine at Mount Sinai, who led the study. “It looks like there was at least low-level circulation.”

The findings were posted online Tuesday and have not yet been vetted by other scientists in a formal review, but several experts said the work was rigorous and credible, if not entirely surprising.

Genetic analyses have suggested that the virus entered the city several times early in the year, but most of those introductions died out and did not initiate the city’s epidemic.

“If I had to put a single date on it, based on current models, we had it as Feb. 19 as the arrival that fueled things,” said Trevor Bedford, an evolutionary biologist at the Fred Hutchinson Cancer Research Center in Seattle. Dr. Krammer’s date is only slightly earlier, he noted.

The study also confirms estimates by epidemiologists working for New York State that roughly one in five New Yorkers had been exposed to the virus by late April, a figure broadly consistent with data released on Friday by the Centers for Disease Control and Prevention.

“I think it’s cool that we all have similar numbers,” Dr. Krammer said.

The similarity is even more striking, experts said, because the three studies all arrived at their estimates differently.

Dr. Krammer and his colleagues analyzed plasma samples from nearly 5,500 patients who went to Mount Sinai for routine medical appointments, were seen in its emergency department or were hospitalized from the week ending Feb. 9 through the week ending April 19.

The C.D.C. looked at blood samples from people who went in for routine medical exams, but only the week ending April 1 for New York City. The New York State study recruited people at supermarkets from April 19 to April 28.

“When we have three sources all giving you consistent results, that lends strength to all the findings,” said Eli Rosenberg, an epidemiologist at the State University of New York at Albany and lead author of the state study.

The numbers from all three studies also agree on a crucial point: The vast majority of infections in New York City and elsewhere in the country went undiagnosed. Even in places with large outbreaks, the number of people exposed to the virus is still far from what is needed for herd immunity.

The Mount Sinai researchers grouped their samples in different ways and analyzed them using a lab-based antibody test that is highly accurate and specific to the new coronavirus.

Among people admitted to the emergency room or the hospital during the study period, the prevalence of antibodies rose to nearly 60 percent from 3.2 percent, the researchers found. These numbers are high because they include people who were severely ill with the coronavirus.

But among people who gave blood for routine appointments, or were admitted to the hospitals for reasons unrelated to the coronavirus — a group that represents the general population — fewer than 2 percent of people had antibodies until the week ending March 29. The rate rose exponentially after that, ending at 19.3 percent among patients seen in the week ending April 19.

The team broke this latter group down further by the reason for their appointment, and found the increase in prevalence was mostly driven by pregnant women. Nearly one in 10 pregnant women had antibodies to the virus by the week of March 29, and the number rose steadily to nearly 27 percent by the week ending April 19.

By comparison, people who came in for appointments related to surgery, cancer or cardiology plateaued at about 9 percent.

Subgroup analyses tend not to be reliable because of the smaller sample sizes, but this is a large study and the trends are intriguing, said Taia Wang, an immunologist at Stanford University.

“It does suggest the possibility that different groups of patients might have different susceptibility to SARS-CoV-2 infection,” she said.

Experts were also struck by the relatively flat prevalence of coronavirus antibodies in blood samples from the first few weeks.

“I would expect during this time period, where people are not modifying their behavior, you’d get much closer to exponential growth,” Dr. Bedford said.

Other cities, like San Francisco, have similarly shown periods when the virus seemed to percolate until something — perhaps a superspreader event — triggered an exponential rise in infections.

Dr. Krammer is continuing to track antibodies in blood samples and plans to do so for at least a year. But he said he would not expect the prevalence to rise much above 20 percent in May or June, because infections in New York City had tapered off by then.