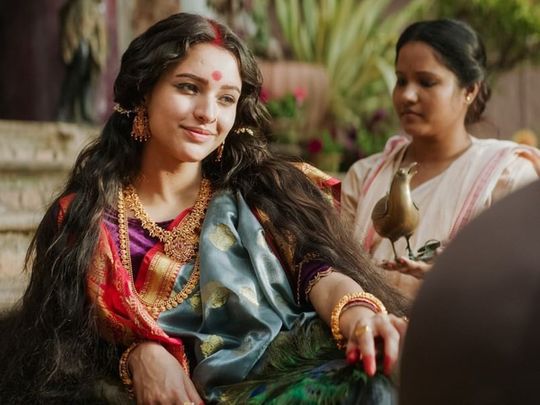 Indian actress Tripti Dimri, who plays the title role in the much-celebrated supernatural thriller ‘Bulbbul’, is frightfully pragmatic about being an outsider and handling rejections during auditions.

“To be an actor, you have to have patience. Otherwise, just pack your bags and go home,” said Dimri in an interview with Gulf News over a Zoom call.

Self-made actor Sushant Singh Rajput’s suicide on June 14 has trained the spotlight on Bollywood’s hostility towards acting hopefuls and how nepotism pervades every sector of the entertainment industry.

Dimri wasn’t born to an acting dynasty either and she made her acting debut in 2017 with ‘Poster Boys’, followed by her second romance ‘Laila Majnu’ a year later. “A week before ‘Laila Majnu’ released, I was in the vegetable market thinking that after its release I would become so popular that I won’t be able to buy vegetables because fans would recognise me. But nothing happened and nobody spoke about the film. I waited for six or seven months and no offers came along for a long time. I just waited… There were days when I woke up, wondering what to do with my day? There was nothing, but waiting,” said Dimri.

But her perseverance seems to have paid off. Her third attempt, ‘Bulbbul’, co-produced by actress Anushka Sharma and directed by Anvita Dutt, has made her a star to reckon with overnight.

There’s now a renewed interest in this new talent, who plays the title role in the period feminist fable. She stars as an enigmatic lady of the manor who is subjected to domestic violence by her husband, played terrifically by Rahul Bose, and sexually violated.

“Things can get difficult if you are not living with your friends or family in Mumbai. It’s more frustrating when you see your other friends going to work and you are feeling useless most times. But I utilised that waiting time to work on myself as an actor. It paid off,” said Dimri.

Like any quintessential outsider, she was eager to make the most of her role in ‘Bulbbul’, streaming on Netflix now. While filming the graphic rape scene was understandably traumatic, Dimri looked at it as an actor would — with utmost professionalism.

“I come from a conservative family. My family did freak out when they saw their daughter being raped by a stranger. I had to explain to them that I am an actor… As long as it is important for the story, that rape scene was an important scene in the film. As an actor, I wouldn’t reject a scene because I felt awkward or disturbed,” said Dimri.

Here’s her take on…

The success of ‘Bulbbul’…

“It is quite unreal and am over the moon right now. I am very happy and I am excited because I am not accustomed to this kind of adulation. I didn’t get that reaction for my first film or my second film ‘Laila Majnu’ even though they were theatrical releases. After watching me in ‘Bulbbul’ this week, I have got messages about many wanting to re-visit ‘Laila Majnu’ and there’s a conversation about it. I am so happy that my work apart from the direction, camera work and the costume team are being appreciated.”

Being part of a strong feminist fable…

“I had no idea that it’s going to be one. I found that my character has a graph and the story was very interesting. We are talking about child marriage, domestic violence. It also talks about love, hunger of power and jealousy. But, despite having all these varied elements, the basic narrative was very simple. ‘Bulbbul’ reminded me of those stories that you hear from your grandparents in your childhood and it takes you back to that phase where we were surrounded by our stories. In all that surround noise of growing up, we seem to have forgotten our very first story.”

“She believes in actors being in the moment. We had two months of prep together where we worked on the girl’s back story. She was trying to make me understand where the characters come from in her story. She talked extensively about Bulbbul’s relationship with other characters in the story. She would give us situation as a writer/director. She wasn’t possessive about her content and she didn’t worry about us messing it up. She was fully secure as director. We were asked to approach each scene as situations. We were asked to imagine us being our characters and not as ourselves. We were free.”

Filming the difficult rape scene and the domestic violence shot…

“It was very difficult. We didn’t rehearse that scene until we reached the set. Anvita didn’t describe the scene to me either. Honestly, I was very nervous for those two scenes, but my co-actor Rahul Bose was very supportive. As an actor, it was my responsibility to give my 100 per cent. And Rahul told me that if at any point I an uncomfortable, he was there as Rahul Bose to talk to. He was the opposite of his character Indranil and Mahendra and he had to go into that dark space. Very often, he would break out from the scene, come and talk to me.

“Anvita was also extremely sensitive. After every cut, she would cry and apologise to me. Frankly, I was getting a lot of sympathy on the sets and I felt oddly comforted. As an actor, I knew I had to focus on my scenes at hand and that I was in safe company. I truly believe not taking things too seriously as an actor. Such scenes will happen to you as an actor and you can’t let it screw things up. I did not let such scenes disturb my mental state. I know that I am not the character I am playing. I had to keep reminding myself that I am acting out a scene.”

Her journey until her third film ‘Bulbbul’…

“Honestly, I was not good in my debut film ‘Poster Boys’. With my second film, ‘Laila Majnu’, I was struggling with everything and I just felt lucky to even get the part. I wondered why people cribbed about not getting work because I got enough work in my first month in Mumbai. I had two films in hand and I felt it was God’s plan for me. But soon, I realised that I had to work very hard. My co-star in ‘Laila Majnu’, Avinash Tiwari, would sit with the director and discuss all sorts of details and I would be blank wondering what they are discussing. I used to go home and cry, wondering what kind of mess I am entangled in. After ‘Laila Majnu’, I made this decision to join an acting workshop and that’s what I did. I fell in love with the craft while learning the basics of acting. I have started taking acting seriously now.”

Being led by a female director…

“More power to them. It’s the best time to be an actress in this industry today. Nowadays, there are many good roles for women and we don’t think twice about taking on those challenging roles. There is no need for a male actor anymore to invite people into the theatres or to watch a film online. Times are changing. When I got this film, I told my friends and family about ‘Bulbbul’ and the first question they asked was: ‘Who’s the hero?’ My response was simple: ‘Bro, it’s called ‘Bulbbul’ and not ‘Baabul’”. The concept of heroes and heroines should go away. We are actors who are doing no favour on anybody by acting. I do this because I love it. Let’s concentrate on the stories being told.”

“I am more like the younger Bulbbul. The one who’s old wasn’t close to me. My director gave me this weird exercise of changing my breathing pattern and pretending to be someone who’s their own soul mate and who doesn’t need a man or anyone to complete her. When I talk, I move a lot and I use my facial muscles, so it wasn’t easy to act graceful and in control. I kept telling myself, ‘don’t move your hands, look graceful,’ and it worked.”

‘Bulbbul’ is out on Netflix now.