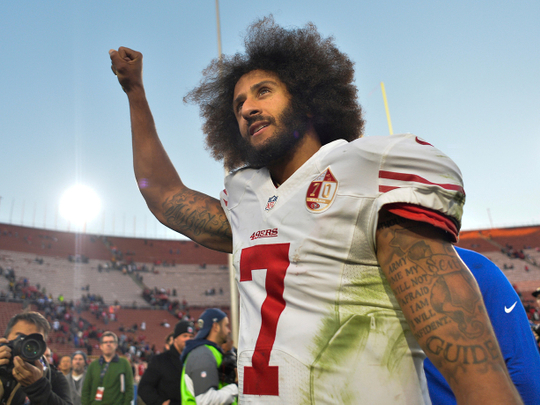 Ava DuVernay and Colin Kaepernick have teamed up for a scripted series that follows the NFL player’s high school years on Netflix.

The project has been titled ‘Colin in Black & White’ and will explore Kaepernick’s childhood, as a Black boy growing up in a white adoptive family. Plus, what led him into his civil rights activism.

Former San Francisco 49ers quarterback Kaepernick shot to fame in 2016, when he knelt during the national anthem as an act of peaceful dissent against police brutality and anti-Black racism in America. Kaepernick was met with waves of support and backlash. The professional athlete has since struggled to be signed by a football team.

“Too often we see race and Black stories portrayed through a white lens,” said Kaepernick.

“We seek to give new perspective to the differing realities that Black people face. We explore the racial conflicts I faced as an adopted Black man in a white community, during my high school years. It’s an honour to bring these stories to life in collaboration with Ava for the world to see.”

Award-winning writer-director DuVernay last year launched ‘When They See Us’ on Netflix, a series about the real-life injustices faced by the ‘Central Park 5,’ who were wrongly jailed in 1989.

She’s also behind the Netflix documentary 13, which explores the prison industrial complex in America as an extension of slavery.

“With his act of protest, Colin Kaepernick ignited a national conversation about race and justice with far-reaching consequences for football, culture and for him, personally,” said DuVernay. “Colin’s story has much to say about identity, sports and the enduring spirit of protest and resilience. I couldn’t be happier than to tell this story with the team at Netflix.”

A release date for ‘Colin in Black & White’ has yet to be announced.