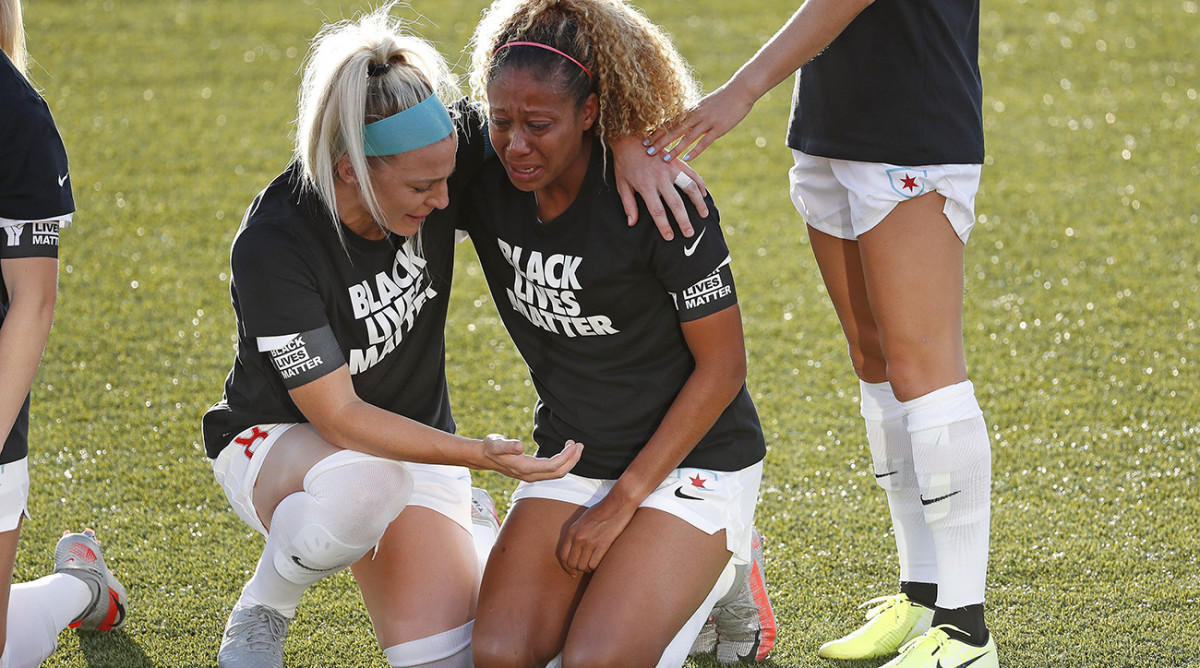 The NWSL announced on Monday it will allow players to stay in locker rooms during the national anthem before games for the remainder of the Challenge Cup.

The decision comes after several teams chose to kneel during the anthem over the weekend when the league returned. Both starting lineups for the Thorns and Courage, as well as the bench players on the sidelines, kneeled ahead of Saturday’s Challenge Cup opener. Later, the Red Stars’ Casey Short and Julie Ertz shared an emotional moment during the national anthem before their game against the Spirit.

“We began this tournament with several important goals. Develop a safe environment for the continuation of sport. Create an innovative competition to showcase the vitality of women’s soccer,” NWSL Commissioner Lisa Baird said in a statement. “Collaborate with our players association and develop a genuine partnership. Raise revenue to fund player compensation. And support and empower players to use their platform to make the world a better place.”

“And so, we’re going to continue to play the national anthem, but with even more flexibility, and support each player’s right to express their individual views, or not. The NWSL stands behind every player, official and staff member. Kneel on the field. Stand with your hand over your heart. Honor your feelings in the privacy of the locker room or at midfield.”

The teams’ choice to kneel comes after peaceful protests have occurred worldwide following the killing of George Floyd in late May. Floyd, a 46-year-old black man, died after Minneapolis police officer Derek Chauvin placed his knee on Floyd’s neck for nearly nine minutes.

In 2016, former 49ers quarterback Colin Kaepernick gained national attention for kneeling during the anthem to peacefully protest police brutality and racial injustice. NWSL and MLS were both supportive of athletes exercising their right to peacefully protest that year. Neither of those stances has changed, officials in both leagues have said.