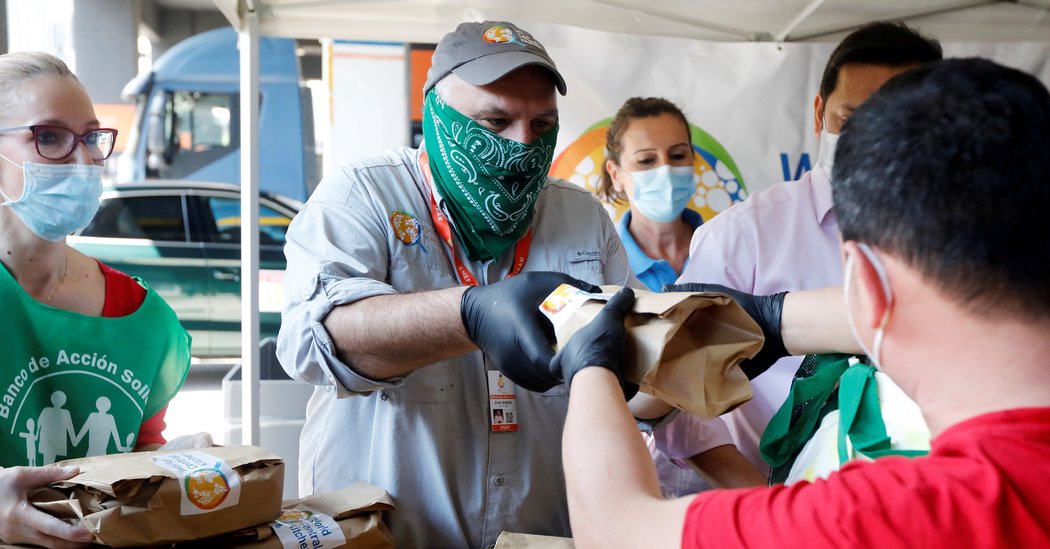 This article is part of a series on resilience in troubled times — what we can learn about it from history and personal experiences.

Before José Andrés won four Michelin stars for his cooking and before he made the cover of Time magazine as the chef who “wants to feed the world,” he served in the Spanish Navy. Service was mandatory back then, and he got a job cooking for an admiral. But what he really wanted was to serve on an actual ship. He eventually ended up on the Juan Sebastián de Elcano, the Navy’s training ship, and learned lessons that still serve him well.

“Just watching 300 people working together, doesn’t matter where the currents came from or the wind came from, the boat would always march forward,” he said recently from El Puerto de Santa María, Spain, where he was visiting a friend’s restaurant and helping to coordinate his team’s response to the coronavirus outbreak there. “Sacrifice, hard work, teamwork, belief in the person on your right and belief in the person on your left.”

It was that sort of group ethic that led Mr. Andrés, 50, to become one of the most celebrated and recognizable chefs in the world, and the founder of ThinkFoodGroup (and its 28 restaurants) and World Central Kitchen, a nonprofit that has fed millions after disasters and crises in Puerto Rico, Guatemala, Indonesia, Mozambique, Haiti and the United States. Most recently, during the coronavirus pandemic, World Central Kitchen, based in Washington, has provided over two million meals in Spain and 16 million in the United States.

Resilience in the face of trauma seems to be one of Mr. Andrés’s specialties. This interview has been condensed and edited for length and clarity.

You seem to have endless energy and determination. Do you have a sense of where that comes from?

I don’t feel so endless of energy anymore. I realize I have boundaries like everybody. I left school when I was very young. The only way forward was to have determination, because if I didn’t look forward nobody else would.

In Spain, there is a classic book called “El Lazarillo de Tormes,” from the 16th century. It tells the story of these young people — they are called “picaresca,” people that have to be very witty to overcome any obstacle. I think this is in my DNA, to adapt to any circumstance. You make the best out of every situation, no matter how bad it is.

How do you set out putting a team together to support a large-scale project like World Central Kitchen?

For me, it was a simple reality that the restaurant community in America and around the world is very large, very deep. You will always find a restaurant, a staff, chefs — and that means connection to farmers and food companies and distributors, with access to gas, with access to refrigeration. That’s no matter where we are in the world. In an emergency, this is something very powerful.

For example, in Yokohama, when we began answering to Covid, Nobu Matsuhisa was one of the first chefs [we contacted]. Yes, I know Nobu well, but his people began helping us with questions we had. That allowed us to do tens of thousands of meals for the Princess cruise ship.

Did working in and running kitchens help you discover the skills and stamina to run these large-scale programs?

Remember that over all kitchens, there’s a little bit of chaos. Cooks like me, we are naturals with chaos. It’s a Friday night and order after order keeps coming in. Fish with no garlic, and vegetables with no black pepper, and well-done steaks and “I don’t want mustard.” Then the system crashes, the computer crashes. Restaurants keep putting food out.

In March, you wrote an op-ed for The New York Times, and you outlined essential steps to your work feeding in Puerto Rico after Hurricane Maria. Are those steps the same for a response to the pandemic? Have you adapted your thinking with this new challenge?

Obviously every previous experience helps us for the next one, but two emergencies are never equal. I always say that the future of business, the future of N.G.O.s [nongovernmental organizations], are not those that only plan. If you plan too much and write page after page of the perfect plan, chances are that in the next emergency nothing will go as planned. Then the people who don’t have a written plan, what do they do? That’s why I sincerely believe that the best way forward for business, small, big, N.G.O.s and governments is to become experts in adaptation. Adaptation will always win the day.

At World Central Kitchen, we have one mission and one very simple objective: feed the hungry, bring water to the thirsty. Everybody understands that very simple, clear, profound message. At the end, we tell them: Adapt to the circumstances to achieve that.

In that same op-ed you wrote: “These challenges can seem overwhelming, but we believe the most effective solutions are often right in front of us.” I think there are a lot of people out there who sort of get paralyzed by these massive challenges. How do you personally overcome that feeling?

Hmm. Let me see. In Puerto Rico, there was no bread. On paper. But there you had four bakeries. But people are thinking about bringing bread from Florida. We were thinking about how to get generators to the bakeries so they could start producing bread. People that were trying to bring bread from Florida, a month later they were unsuccessful. People like us, talking to the owners of the bakeries and just trying to be part of the solution, we were getting bread in less than 24 hours locally. Do you understand what I mean? Sometimes very big problems, they have very simple solutions.