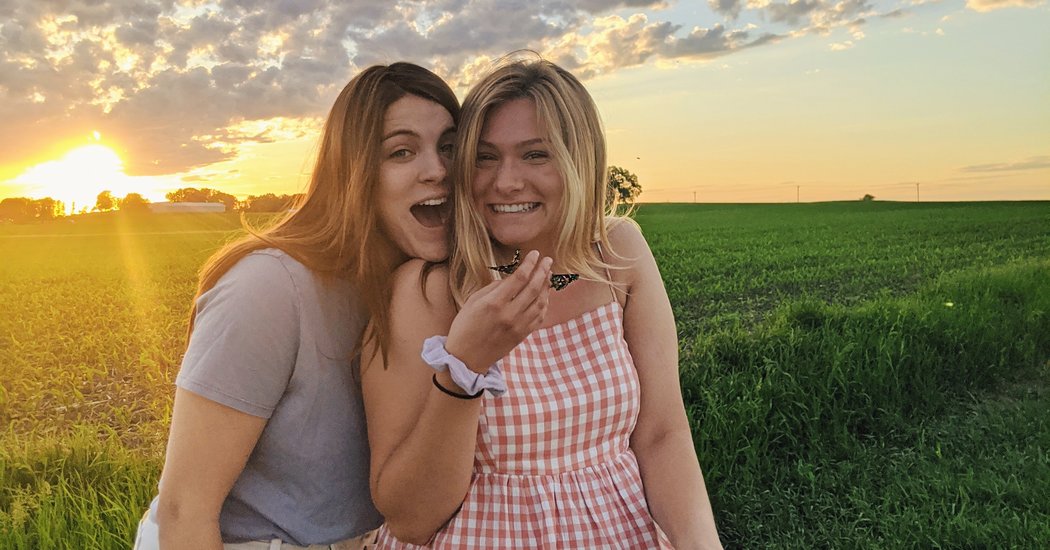 On Feb. 3, Lauren Vlach received $8 on Venmo, spread across four $2 payments, from a girl she had never met. Each payment included a block of text; read together, they formed what Cas Stephens, who sent the payments, titled her “girlfriend application” to Ms. Vlach.

One of the pros of dating her: “Can do a backflip on a snowboard.”

One of the cons: “Have not seen any Disney movies.”

Though she pursued her on Venmo, Ms. Stephens, 20, found Ms. Vlach, 22, on TikTok, where her videos were racking up thousands of views. Ms. Stephens, on the other hand, didn’t have a profile picture yet. She figured it would be easier to get Ms. Vlach’s attention elsewhere, and seized on the Venmo handle listed in her bio.

Her application was accepted, and they went on their first date that night, to watch the sun rise at the Minnesota State Capitol in St. Paul. They have been documenting their relationship on TikTok ever since.

“Proves TikTok is the best lesbian dating app,” Ms. Vlach wrote in the caption of their first video together.

This is a common sentiment on Lesbian TikTok, a corner of the app dominated by funky earrings and references to the indie musician Girl in Red. Like other niches, Lesbian TikTok has its own influencers, cliques, memes and drama. But it is also a hub of community, where those discovering, questioning and embracing their attraction to other women can find friends, solidarity and even love.

Like other social media, TikTok connects L.G.B.T.Q. people around the world. And the impulse to convene online has only gotten stronger during quarantine. According to data from the market research firm Sensor Tower, approximately 338 million first-time users downloaded TikTok from the App Store and Google Play from March 1 to May 31.

“A lot of my straight friends will be like, ‘Why don’t you just meet people in real life?’ But it’s hard to know if someone’s gay sometimes, and it can be kind of anxiety inducing to bring that up with people,” said Rachael Thompson, 20, who lives in Arlington, Texas, and recently met up with a TikTok friend from New Orleans.

According to documents obtained by Ad Age in October 2019, 69 percent of TikTok users are between the ages of 16 and 24, meaning many users are too young to sign up for certain dating apps (where prospects are location-dependent), much less go to bars (of which are increasingly few designated for lesbians). Plus, many teenagers are still in the closet, or figuring out their sexuality. TikTok is a place where they can do so safely.

Such a companionable environment can engender impressive thirstiness. On practically any video of a pretty girl, there will be multiple comments asking, “Do you listen to Girl in Red?”, Gen Z’s female-specific version of “Are you a friend of Dorothy?”

That boldness has its downsides, though.

“Nobody should be forced to come out, ever,” said Olivia Boardman, 20, who met her girlfriend on TikTok during quarantine. She said publicly asking if someone is gay “puts people in an uncomfortable position.”

Ms. Boardman, who was outed when she was 14, said many teenage girls have sought her guidance after seeing her on TikTok. (Her bio: “C.E.O. of giving advice to gays.”)

Unlike on Twitter or Instagram, TikTok users scroll through a main feed, or “For You” page, of algorithm-generated videos from users they may not follow. This makes for a contained user experience: Someone can join TikTok, and if they search for, interact with or create lesbian videos, their For You page will mainly contain lesbian videos. Straight influencers like Charli D’Amelio may have droves of followers, but a member of Lesbian TikTok (or other niche communities, like Alt TikTok, WitchTok or Frog TikTok) could feasibly never see them.

Avery Blanchard, 20, who is known online as Avery Cyrus, said she thought Lesbian TikTok was “the only TikTok” when she first joined the app.

“I just didn’t even know that there was a regular side of TikTok,” she said.

If Lesbian TikTok were its own world, it could be broken down into many countries with their own national anthems — songs played over and over in users’ videos. There are the cottagecore girls (anthem: Mitski’s “Strawberry Blonde” or anything by Hozier), the couples (anthem: Girl in Red’s “We Fell in Love in October”) and the aesthetes (anthem: Vivaldi’s “Summer,” from “Portrait of a Lady on Fire”), among others.

“It reminds me a lot of if A.O.L. chat rooms could come to life,” said Shelli Nicole, a writer who has covered Lesbian TikTok for the queer women’s website Autostraddle.

Influencers like Ms. Blanchard would occupy the largest territory in Lesbian TikTok World. She joined the app last October on a dare; now she has 1.6 million followers.

Ms. Blanchard met another TikTok influencer, Soph Mosca, 21, at the popular creator convention Playlist Live in February. They hit it off and are now involved. Ms. Blanchard said she didn’t expect TikTok to become a matchmaking site when she first joined.

“I didn’t know it had the potential to, like, be the next Tinder,” she said.

“I never thought I would date someone from TikTok,” echoed Rachael Espie, 18, who met her girlfriend, Sarah Pye, 20, when she happened upon one of Ms. Pye’s videos in her feed. Their relationship is intercontinental: Ms. Espie lives in Glasgow, and Ms. Pye lives in Lake Tahoe, Calif.

Lesbian TikTok has had a huge impact on Ms. Espie’s life beyond finding her a girlfriend. She said the app inspired her to come out as a lesbian in December 2019.

Ms. Vlach had a similar story: Having only dated men, she said she joined TikTok because she heard there was “this whole lesbian community” on the app.

“I can’t wait til I experience a love like this,” an 18-year-old user commented on one of Ms. Vlach’s videos with Ms. Stephens.

“I hope you find it one day,” Ms. Vlach replied.