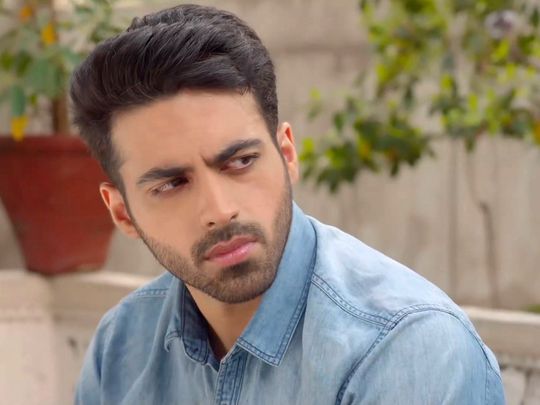 It isn’t every day that a first-time actor gets to play an author-backed role in their debut TV serial.

Feroz Kadri was lucky when he bagged a part in Hum TV’s ongoing soap, ‘c’. It was a role that was conceived as a one-dimensional character but went on to become the show’s major draw.

In fact, the scriptwriter and director decided to extend his role and add more shades to it.

Mid-show, to Kadri’s utter surprise, the trajectory of his on-screen character, Sajjad, was altered — from being an illiterate, uncouth and unemployed small-towner whose marriage to an educated and sophisticated cousin only serves to lower his self-esteem and raise his temper, to a nice and romantic man who has the greatest respect for his wife and would support her even after she is paralysed in a road accident, against the wishes of his foul-mouthed mother.

Later, when Sajjad goes back to school, on the insistence of his wife, he becomes a victim of student politics and ends up being kidnapped and tortured.

It’s a character that runs an entire gamut of emotions. And Kadri couldn’t be happier.

A proud Lahori boy, who studied political science and media at college before working at an advertising agency for some time, Kadri had the conviction to leave his hometown as well as a covetous job to make it in Karachi’s bustling showbiz world — “all by myself,” he tells Gulf News, with a hint of pride.

“I was coming in without any connections or a godfather of sorts. It hasn’t been a smooth ride. I’d call myself an acting warrior,” he says.

Kadri admits that he might initially have been nudged in this direction by his friends and colleagues who often suggested that he had the looks and talent to be in front of the camera.

As a little experiment, he was asked by ace ad filmmaker Ahsan Rahim, who had been hired to shoot a commercial for the same advertising agency, to model in the advertisement.

All this motivated him to explore the field of acting. Technically, his first project was an ARY Digital soap, titled ‘Chand Ki Pariyaan’ (2018), but because it was pulled off air after a few episodes due to production issues, Kadri would rather consider ‘Wafa Kar Chalay’ as his ‘launch.’

Today, he’s been offered another show that requires him to shoot in Islamabad. Kadri wouldn’t reveal much about it “because I have not yet signed on. I’m also a little wary about shooting in times of Corona.”

He laughs off the notion that he somehow attracts soaps easily: “All I can say right now is that even if I take this up, it’ll be my last [soap]. I am more interested in [doing] limited series, and I want to play diverse characters.”

His role model is Fawad Khan who “went to the same school as I did,” he says, almost fawningly. “When I came to know that he [Khan] had been the school head boy in his time, I was really impressed. Around that time, [TV series] ‘Humsafar’ happened, and you can say that it kindled a little desire in me to be like him.”

Interestingly, quite like Khan, Kadri also doesn’t put a lot of premium on having a social media footprint. “I don’t even like to take my selfies, let alone post them on Instagram for others to see,” he declares.

He hopes that eventually his performances will fetch him good projects rather than the number of followers on his social media accounts.