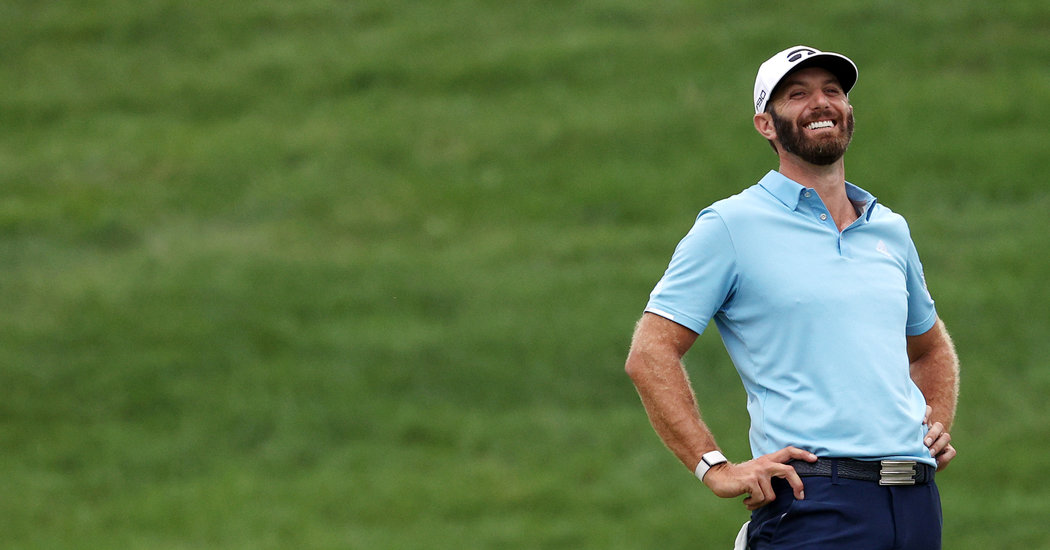 CROMWELL, Conn. — The Travelers Championship, the PGA Tour’s third tournament after a 90-day layoff because of the coronavirus pandemic, began last week with a flurry of positive tests for the virus among players and caddies. The event warily lurched forward.

But by the final round Sunday afternoon, uncertainty, drama and the import that accompanies it seemed almost reassuringly familiar as another PGA Tour event closed with gripping, taut pressure.

There was Dustin Johnson, ranked sixth on the tour, standing in a pond with his pants rolled up desperately trying to save par a few minutes after he hooked a tee shot out of bounds and close enough to a railway to be a stowaway. There was Brendon Todd, who began the day with a two-stroke lead, having to endure the dreaded despair of a shanked chip shot that ruined his round. There was Kevin Streelman making a late charge as if conjuring the mojo of his 2014 Travelers victory, when he finished the final round with seven consecutive birdies.

Oh, yes, and Bryson DeChambeau, who has gained 40 pounds from an intense workout regimen designed to overpower tour layouts, once again smashed towering drives that made some holes look like those from a pitch-and-putt course. However, as it turns out, pitching and putting is still a challenge for most golfers, including DeChambeau.

In the end at the T.P.C. River Highlands golf course about 12 miles outside Hartford, Conn., Johnson had the right combination of strength off the tee and deftness on the greens to claim the championship by one stroke over Streelman. For Johnson, who shot a final round 67 to finish 19 under par for the tournament, it was his 21st tour victory and his first since he won the World Golf Championship event in Mexico in February 2019. Nonetheless, earning the Travelers title means that Johnson has won a tour event in each of the last 13 seasons. Only Jack Nicklaus, Arnold Palmer and Tiger Woods have longer streaks for wins in consecutive PGA Tour seasons.

“It’s obviously a great streak and anytime you’re mentioned with those names, it’s obviously a big accomplishment,” Johnson said Sunday. “But it was a long time between wins and hopefully I won’t have to wait that long again for the next one.”

Johnson shot a career low 61 during Saturday’s third round and on Sunday was forced to wait through a weather delay of about an hour when thunderstorms moved through central Connecticut. Johnson was leading the tournament with three holes left to play at the time.

“The rain delay didn’t help because I had time to think about things,” he said. “I had been on a nice roll before that.”

It would be more accurate to say that Johnson had settled down after an adventurous stretch of golf when he chased down Todd but was suddenly staggered by wayward tee shots. In all, Johnson had three bogeys and four birdies in his final 12 holes.

A bogey at the seventh hole began the topsy-turvy stretch, but Johnson rallied by sinking a 27-foot birdie putt that broke sharply from right to left on the eighth hole. He then birdied the next two holes as well. By the 13th hole, Johnson appeared to be in cruise control but then knocked his drive out of bounds to the left and struggled to make a bogey on what should have been an easy par 5 for the long-driving Johnson. But he rallied with a birdie on the next hole.

On the 15th hole, a short, drive-able par 4, Johnson’s tee shot was heading for a pond to the left. Though the ball landed at high speed just a few feet from the water, luckily for Johnson it remained on the grass bank.

“I hit a 3-hybrid very poorly,” Johnson said of the shot. “I don’t know what was going on with my tee balls today. And I was a little lucky there, but I still had to get up and down for par.”

Johnson’s only chance to advance the golf ball toward the green from about 25 yards away was to wade into the pond, which he did after removing his shoes and socks and hiking up his pants to just below knee level. His chopping chip from the bank traveled about a third of the way to the green but Johnson, after being reunited with his shoes and socks, pitched his third shot within four feet of the hole. He made the par putt.

A bogey on the 16th after the weather delay cut his lead over Streelman to one stroke, but Streelman, who shot 67 Sunday, could not replicate his 2014 magic on the greens. He finished with five successive pars. It was Streelman’s second runner-up finish of the year, having been second at the AT&T Pebble Beach Pro-Am in February.

“It’s a little disappointing, making a last birdie would have been nice,” Streelman said. “But I have to take a lot of positives. I just played beautifully.”

Todd, who overcame golf’s dreaded swing yips a few years ago, held a two-stroke lead over Johnson when his approach shot to the par 4, 12th hole drifted slightly right of the green. Todd was left with an awkward uphill chip shot within eight feet of the green.

It was a delicate shot but Todd rocketed the ball off his wedge and it flew over the green and sharply to the right. Now needing a flop shot to ascend to the green, Todd’s attempt was short and rolled back down the hill. A putt still did not reach the green and two putts later Todd was out of contention after a triple-bogey seven. For Todd, it was the first time he had not made a par or better since the fourth hole of Thursday’s first round.

The PGA Tour resumes next week at the Rocket Mortgage Classic in Detroit beginning July 2.