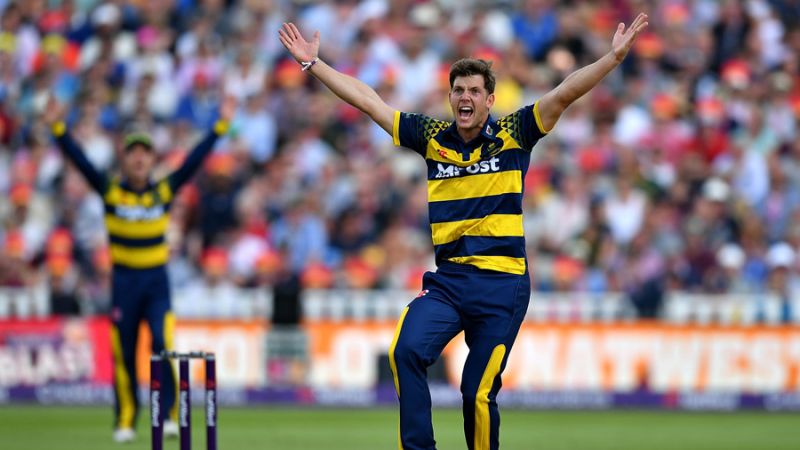 Craig Meschede, the Glamorgan allrounder, has been forced to retire due to a shoulder injury at the age of 28. Meschede was diagnosed with Neurogenic Thoracic Outlet Syndrome last year and took the decision to end his playing career on the advice of specialists.

Meschede said that the syndrome, which can cause pain, tingling and weakness in the arm, had “taken a massive toll physically and mentally”. He underwent months of rehabilitation, in an attempt to regain shoulder strength and mobility, but has now called time on a nine-year career that saw him represent Glamorgan, Somerset and Germany in T20 internationals.

“The last few weeks have been very emotional for me as cricket has played such a big part of my life,” Meschede said. “Saying that, I have to do what’s best for my health and there is life after cricket. The physio and support staff and everyone at Glamorgan have been brilliant throughout this process and I can’t thank them enough.

“The syndrome has taken a massive toll on me physically and mentally and it’s been hard to perform skills at a level I know I’m capable of. I now need to undertake an operation and period of rehabilitation in order to get my quality of life back.

“Playing at Somerset and Glamorgan has presented me with many great opportunities as well as making a number of friends for life. I will always be grateful for the opportunities cricket has provided me. I wish all the players and staff great success in the future and hope the lads can get on and play this year.”

Born in South Africa but educated in Somerset, Meschede came through at Taunton as a hard-hitting allrounder. His maiden first-class wicket was that of Sachin Tendulkar, during a 2011 tour match, but he found his opportunities limited and moved to Glamorgan, initially on loan, in 2015.

At Glamorgan, he scored both of his first-class centuries, as well as taking a maiden five-wicket haul. He helped the club reach T20 Finals Day in 2017, and recorded his career-best T20 score – 77 from 47 balls – the following season, batting in the top three. Meschede also took advantage of his German parentage to be selected for the 2018 T20 World Cup regional qualifier in the Netherlands.

Injury limited his opportunities in 2019, but he made his full T20I debut for Germany in the European regional finals in Guernsey, scoring 179 runs at a strike rate of 155.65 to go with six wickets in five matches.

Glamorgan’s director of cricket, Mark Wallace, said: “It’s always very sad when a player is forced to retire through injury and especially in Craig’s case at an age when many are reaching the peak of their careers.

“Craig’s natural talent and skill always stood out and he had a flair and talent for the game, which made him exciting to watch and play with. Moreover, off the field, Craig was a committed professional and popular member of the squad who always worked hard to give himself and the team the best chance of success.

“I’m sure I speak for everyone at the club in thanking Craig for everything he has done both on and off the pitch during his time here and we wish him well for a bright future outside of the playing field.”