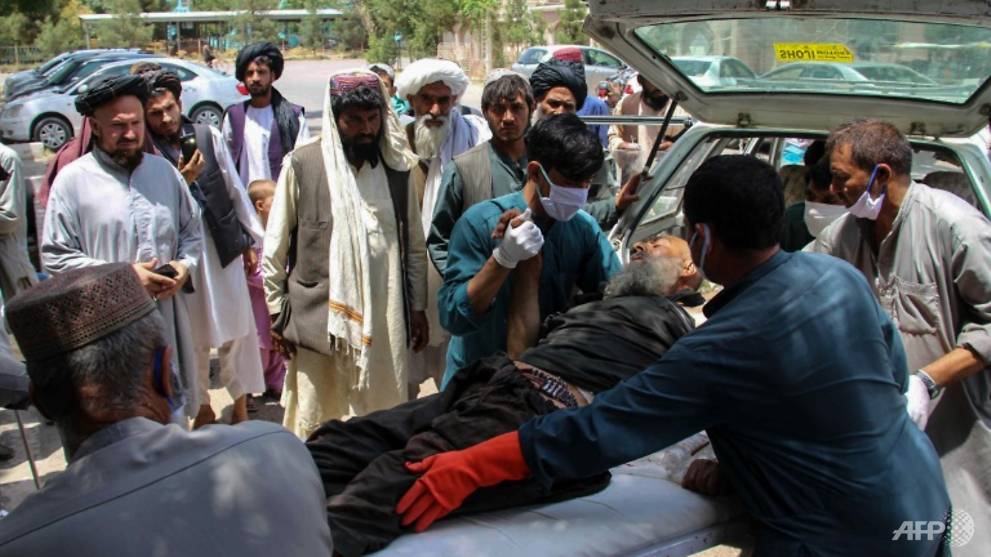 KANDAHAR: Multiple explosions tore through a busy market in southern Afghanistan on Monday (Jun 29), killing at least 23 civilians, officials said, blaming the Taliban for the carnage.

The latest bloodshed comes as both the Taliban and Afghan government prepare to launch peace talks aimed at ending the country’s nearly two-decade-old war.

The blasts in the Sangin district of Helmand province also wounded 15 people, the governor’s office and army said in separate statements.

Rockets hit the market at 9:00 am local time after which a car bomb exploded, the governor’s office said, blaming Taliban militants for the attack.

The army also accused the Taliban of carrying out the offensive.

“Unfortunately, 23 civilians were killed and around 15 others were wounded,” the army said in its statement.

“The Afghan government once again calls on the Taliban to give up violence, and heed the demand of the people to stop fighting and start talks,” Ghani said, in a statement issued by his office.

A resident of Sangin said rockets hit the market at a time when no Taliban militants or government forces were present.

“One rocket landed in an area where children were playing,” said Janan, who gave only one name, who had come to the market to sell cattle.

The Taliban denied responsibility, pinning the blame on the Afghan army which they accused of firing the rockets.

The militants hold large areas of Helmand province, a region known for its opium production.

Violence dropped after the Taliban offered a rare ceasefire to mark the Eid festival on May 24, but officials say the militants have now stepped up attacks against security forces and civilians.

The deadliest attack was on May 12 when armed men stormed a maternity ward of a Kabul hospital, killing 25 people including 16 mothers.

The Taliban have denied most of these attacks, but acknowledge that the group’s fighters have been targeting security forces across most provinces.

The rise in violence comes as both the government and Taliban are set to engage in peace talks.

The United States has pushed for launching the talks after it signed a deal with the Taliban in February that paves the way for withdrawing all foreign forces by the middle of next year.

The Taliban have expressed readiness to participate in the talks, but insist negotiations will begin only after Kabul completes the release of 5,000 of the group’s militants held in Afghan jails as agreed in the deal with Washington.

Afghan authorities have so far released about 4,000 Taliban.