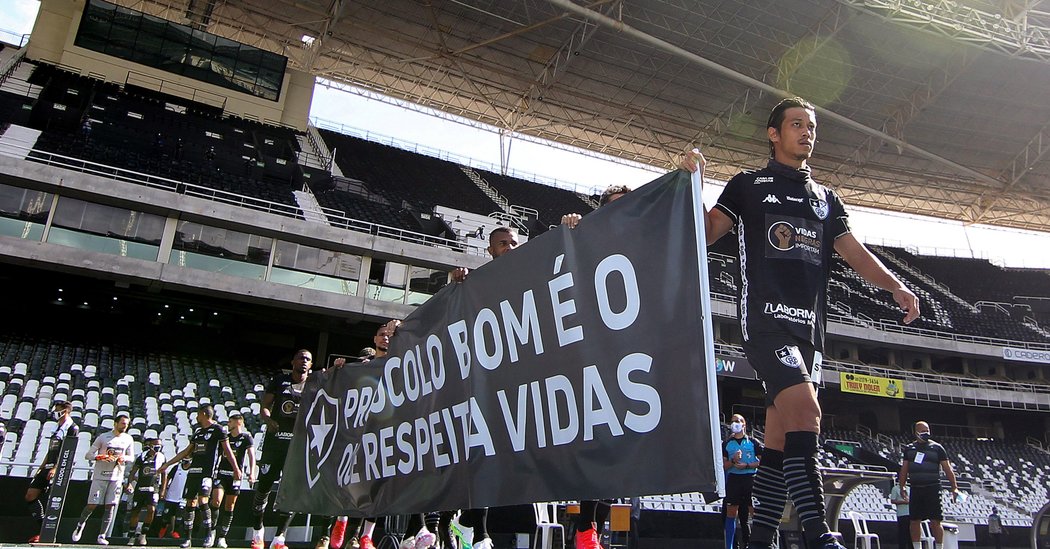 One of the top soccer teams in Brazil came out to play its first game back carrying a banner objecting to playing the game.

“A good protocol is one that respects lives,” the banner read.

Before the game in Rio de Janeioro on Sunday, most of the Botafogo players had posted a statement on social media protesting the return of soccer. “Football is our life, but we understand the moment is not ideal to put new lives at risk,” it said.

Brazil has become a hot spot for the coronavirus, passing the one million mark in cases, second to the United States. President Jair Bolsonaro has declined to wear a mask and repeatedly played down any danger.

A second top team, Fluminense, also played Sunday despite misgivings. “Thousands of people are still dying in Brazil, and we’re forced to play football with no protection,” the team’s chairman, Mario Bittencourt, wrote before the game,

The two teams have been vocal opponents of returning to play, threatening earlier in the month to boycott the resumed season, before backing down.

After Liverpool clinched its inevitable but long-delayed Premier League title, Manager Jürgen Klopp shared his delight with fans in a heartfelt letter published in The Liverpool Echo.

“I have never before written a letter to a newspaper,” he said. “The actions and achievements of the players speak for themselves. All of the tributes that they have received are so deserved, and as their manager I could not be more proud.”

But amid the joy, Klopp also felt the need to admonish some Liverpool fans. A celebration on Friday night included thousands of fans, despite the urging of the authorities for them to stay home. A teenager was arrested, accused of throwing a firework and starting a small fire at the Royal Liver Building, a Liverpudlian landmark at the waterfront, possibly because it was lit up in blue, the colors of Liverpool’s rival, Everton, which has offices there.

“What I did not love — and I have to say this — was the scenes that took place at the Pier Head on Friday,” Klopp wrote. “I am a human being, and your passion is also my passion, but right now the most important thing is that we do not have these kind of public gatherings. We owe it to the most vulnerable in our community, to the health workers who have given so much and whom we have applauded and to the police and local authorities who help us as a club not to do this. Please celebrate, but celebrate in a safe way and in private settings, whereby we do not risk spreading this awful disease further in our community.”

Fans will be required to buy tickets with credit cards online, so they can be tracked, if necessary. Their body temperatures will be checked at the entrances, and stadiums will be limited to about a quarter of capacity, with fans spread throughout the stands. The league expects to ban cheering as a precaution against coronavirus spread.

Until now, the games have been played in stadiums with banners featuring pictures of fans instead of the real thing.