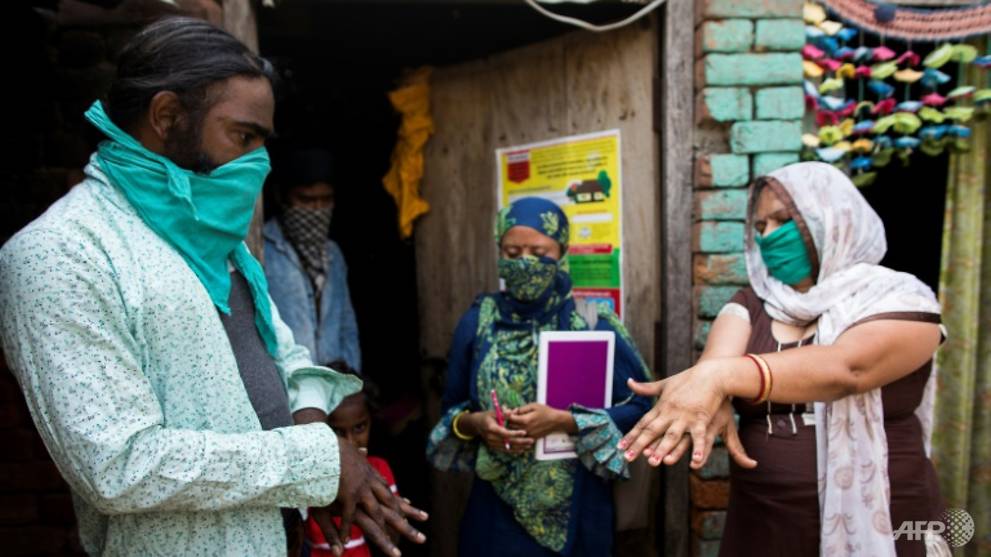 MEERUT, India: Unprotected and poorly paid, an all-women army of health workers confront suspicion, anger and the threat of infection as they go door to door searching for COVID-19 sufferers in India’s poor communities.

About a million accredited social health activists, or ASHAs, are deployed in cities and villages to administer basic medical care such as vaccinations and delivering babies.

But as the number of confirmed infections in India soars past 500,000, the women find themselves on the front line of the battle against the contagion, identifying potential cases and educating locals in the hope of slowing its spread.

ASHA workers told AFP they had nothing except their headscarves to protect them from the virus and were often abused by people angry about the government’s handling of the outbreak, which is one of the worst in the world.

“I have been an ASHA for 14 years now and never have I been as scared to knock on a door with my bare hands. We don’t have gloves, not even masks,” said Alka, who asked AFP not to use her surname.

Alka and her colleagues visit households and ask the occupants to fill out a questionnaire on any virus symptoms they might have and their recent travel histories.

Many of the residents are among the millions of migrant workers left jobless and destitute by the months-long virus lockdown imposed by the government in March.

If someone looks like a potential case, the ASHAs report them to authorities.

Some ASHAS have been physically attacked by villagers who fear they are carrying the virus or are government spies.

During a recent doorknock in a village in the northern state of Uttar Pradesh, Alka and her two colleagues were spotted by eight men in a store who came out and surrounded them.

The men shouted at the women about the shortage of basic food and protection against the virus.

Standing her ground, Alka said she told the men: “Even we don’t get gear and grains. Where will we get it for you?”

Such harassment is bearable, she told AFP. “Recently some locals tore the clothes on one woman while she was working.”

Given the lack of contact tracing in India, the ASHAs were “critical elements” in India’s fight against COVID-19, said Anant Bhan, a leading public health expert.

The women know their communities well, Bhan said. But their work is difficult and poorly paid despite a 1,000 rupee (US$13) coronavirus bonus.

‘WE ARE THE HEROES’

Alka supports her husband – who does not approve of her work and often calls her names – and three children with a monthly salary of 6,000 rupees.

But she has to pay for her own transport to and from the communities she is helping.

Sometimes she has to walk home because she has run out of money or there are virus restrictions affecting public transport.

Alka and her team say they have formed a “sisterhood” that keeps them going.

“Our supervisors give us orders over the phone from the comfort of their offices or homes. We sacrifice our family lives and take daily risks to educate and help people,” said Alka.

“We are the heroes.”

During a recent visit to the village of Bahadarpur, Alka used a homemade flour-based glue to stick up a poster outside a home explaining the need to wash hands and take other precautions against the virus.

“The glue on the poster is not strong enough,” she said.

“But if I have to use even a rupee from my salary for glue, it’s a huge dent in my budget.”

The women’s pleas for people to wear face masks and self-isolate if they have symptoms are often not welcomed, especially in impoverished communities where many are day labourers.

“I’ll stay home if you guarantee me that my kids won’t die of hunger,” a man told the ASHAs during a visit accompanied by AFP.

Alka said it was not easy to get people to heed their advice.

“People are struggling to feed their families,” she said.