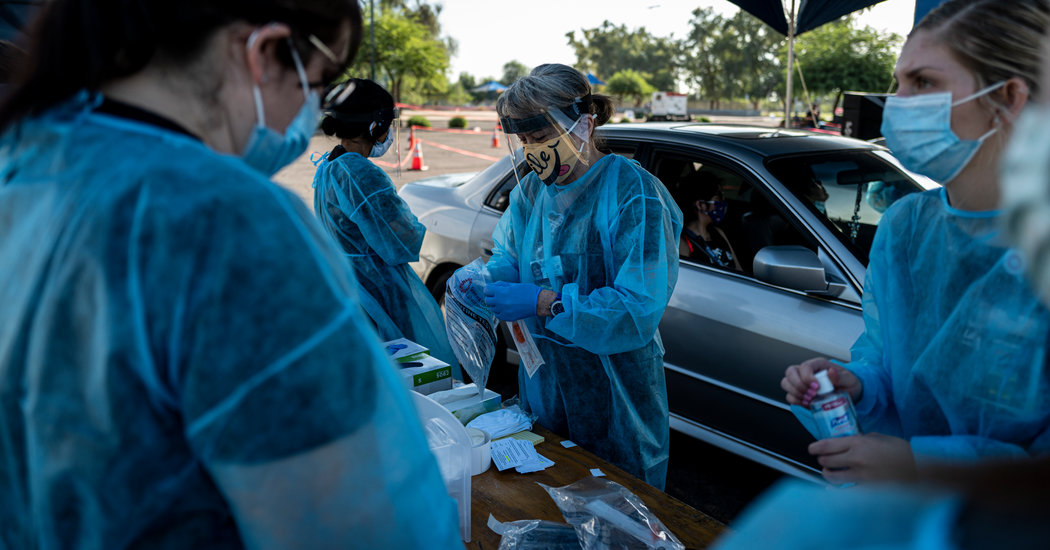 The number of coronavirus cases worldwide has risen to 10 million, and the death toll is approaching 500,000, with the U.S., India and Brazil seeing escalating daily infections.

Testing sites in the U.S. were overwhelmed this past weekend in the hard-hit states of Arizona, Florida and Texas.

Coronavirus cases in the U.S. have risen 65 percent over the past two weeks, and now total more than 2.5 million. Some administration officials, including Vice President Mike Pence, say the surge in cases is linked to increased testing, but health officials disputed that claim.

“There’s also no doubt that the virus has the upper hand,” said Dr. Thomas R. Frieden, the former head of the Centers for Disease Control and Prevention.

Florida, Nevada and South Carolina hit single-day records for new cases on Saturday, which was also the third consecutive day with more than 40,000 new cases in the country.

Here are our latest updates and maps tracking the outbreak.

China’s top leader, Xi Jinping, has been eager to impose control over Hong Kong. That may finally happen this week.

Chinese lawmakers meeting in Beijing could approve a national security law for Hong Kong as early as Tuesday.

The legislation is expected to drastically curb political protest and dissent in Hong Kong and is moving forward despite threats from the U.S. to strip the territory of its special trade status.

Residents of the territory are still waiting to see the full text of the bill and even Hong Kong politicians who have endorsed the law, including the top local official, Carrie Lam, have said they have not been shown the full text by Beijing.

Analysis: The sidelining of Hong Kong’s elite is the latest sign that President Xi, in his pursuit of power, is willing to defy political norms established over decades, and to do so swiftly and secretively.

Related: With the world distracted by the coronavirus pandemic, China’s military is flexing its might in ways that have raised alarms across Asia and in Washington.

Some 291 Afghan soldiers were killed in Taliban attacks from June 19-25, according to the country’s National Security Council, making the week the war’s deadliest for Afghan forces. Taliban attacks in the past three months have soared nearly 40 percent compared with the same period last year.

The rise in violence is sapping initial optimism around a peace deal the U.S. signed with the Taliban four months ago. The agreement calls for a U.S. troop withdrawal and negotiations on ending nearly two decades of war.

The deal has hit a wall over a prisoner exchange that was supposed to enable direct talks. Instead, the violence has intensified.

Afghan and American officials say the war has entered a complicated period of uncertainty. The insurgency, backed by some foreign countries in the region, is putting pressure on the Kabul government by cranking up bloody attacks, often without claiming them.

Russian bounty payments: In an example of the war’s complexity, U.S. intelligence recently concluded that the Taliban were receiving bounty money from Russian intelligence for targeting U.S. and coalition forces last year, even as they were negotiating peace.

Dr. Camilla Rothe, above, and her colleagues at the Munich University Hospital were among the first to warn the world that the coronavirus could spread from people who had not yet developed symptoms.

But even as evidence mounted from other scientists about symptomless spreading, health officials dismissed the finding as unimportant. Our reporters pieced together why a crucial warning was ignored early in the pandemic as the virus was spreading unnoticed in French churches, Italian soccer stadiums and Austrian ski bars.

U.S. presidential campaign: Polls show that President Trump is losing support among a once-loyal group — older white voters — who have soured on the Republican Party and are largely backing Joe Biden in the six most important battleground states.

Pride: Celebrations this year were cut back over coronavirus concerns, but Taiwan, which has kept its outbreak under control, was able to hold an in-person event on Sunday, with a rainbow flag-led procession in central Taipei.

New Irish prime minister: Ireland’s Parliament has appointed Micheal Martin, a center-right politician, to lead as the country deals with the coronavirus, Brexit and fallout from a housing crisis.

Snapshot: Above, Nala Toussaint, a transgender woman, activist and organizer photographed in Manhattan last week. During the coronavirus pandemic in the U.S., anti-racism protests and Pride month, black trans people are mobilizing more visibly than ever before.

What we’re reading: This Rolling Stone profile of the largely forgotten singer-songwriter David Blue “reads like a classic detective story, with stops in the Greenwich Village of Bob Dylan, the Laurel Canyon of Joni Mitchell, the Montreal of Leonard Cohen — and a final scene you won’t be able to shake,” says Steve Reddicliffe, the deputy editor of the international edition of The Times.

Cook: These crunchy-topped corn muffins use up whatever fruit you have around. They’re perfect for breakfast, warm, with softened butter on the side.

Read: Seven years after “Crazy Rich Asians,” Kevin Kwan is back — but Asia is not. His new novel, “Sex and Vanity,” begins with a very touristy idyll in Capri, then goes back home to Manhattan and the Hamptons, with one eye on Hollywood at all times.

Do: If you’re interested in strong, healthy muscles but wearied by burpees in the living room, you may want to consider heading to the nearest park for weight training. Here’s how to work out without a gym.

Staying safe at home is easier when you have plenty of things to read, cook, watch and do. At Home has our full collection of ideas.

Michael Paulson has been covering theater at The Times since 2015. During those years, he’s written more than 100 articles that prominently mention “Hamilton,” which explores America’s revolutionary origins through the life of Alexander Hamilton.

Now, “Hamilton” is streaming on Disney Plus, starting on July 3. Here’s an excerpt from what Michael wrote about his time on the Hamilbeat.

I sensed right from the start that this musical, with its cast made up mostly of actors of color and its score influenced by hip-hop and pop music, was going to be a huge story. I remember being determined, that summer, to land an article about the production on the front page, convinced that the paper needed to make a big early statement about the show as a game-changing reflection on our culture, our politics and our history. Ultimately, the Page 1 gods agreed. I was traveling in Spain when it happened; I felt so affirmed that I didn’t mind the time-zone-busting copy desk questions.

A feature that followed about Lin-Manuel Miranda’s musical upbringing was particularly fun to report — as we explored the Venn diagram in which show tunes and hip-hop overlap, he started playing random songs from his iTunes library and riffing about what each one meant to him.

The story I waited longest for was about Miranda’s relationship to Puerto Rico, where his parents grew up and where he spent his childhood summers. The island’s influence on his art had always struck me as significant and underexplored. I knew the best way to tell that story would be to see Puerto Rico through his eyes, at least as much as a journalist can, and when he announced that he was bringing “Hamilton” to San Juan, I had my peg. I asked to meet him there, and in fall 2018 he agreed; a devastating hurricane and campus unrest made the story more complex than either he or I could have anticipated, and I’m glad we did it.

P.S.
• We’re listening to “The Daily.” Our latest episode is about Texas’ pause in reopening during the pandemic.
• Here’s our Mini Crossword, and a clue: Big industry in Los Angeles and Nashville (five letters). You can find all our puzzles here.
• Dean Baquet, our executive editor, spoke to Longform Podcast about leading change at The New York Times.