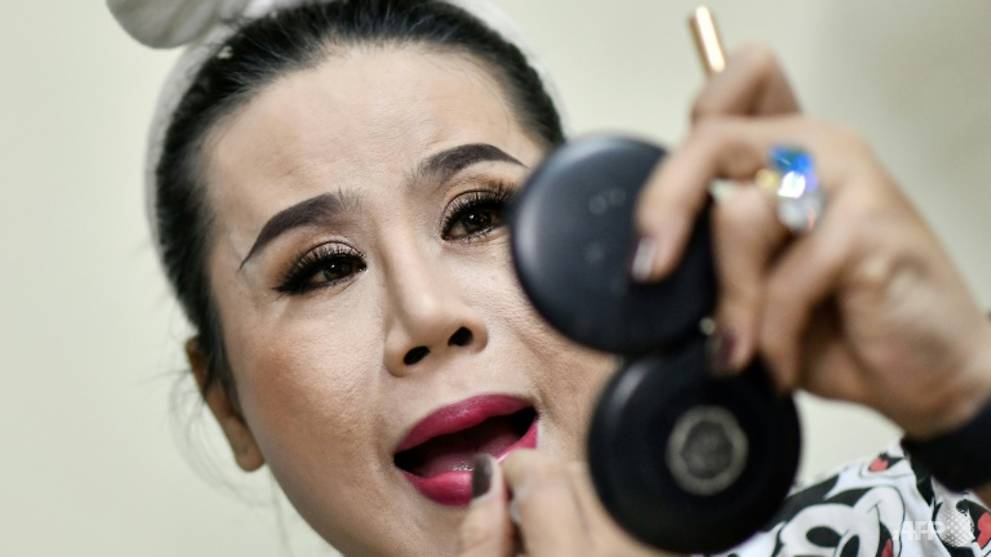 HO CHI MINH CITY: Each night that Nha Vy steps proudly on stage in her traditional Vietnamese ao dai, or sometimes mini dress and heels, memories grow fainter of the taunts she endured as a transgender woman in her rural village.

Nha Vy is one of hundreds of lesbian, gay, bisexual and transgender (LGBT) performers in Vietnam who have found confidence, and a way to earn a living, through lotto shows, a form of entertainment dating back to the French colonial era and now wildly popular in the south.

Like many people of sexual and gender minorities in Vietnam, the 26-year-old has faced stigma and discrimination for much of her life – despite a gradual change in social attitudes in the communist state.

“Not many people from the LGBT community have top class jobs … we generally don’t make it to higher education because we are bullied at school,” she told AFP, perching on a tired floor sleeping mattress in her rented flat in Ho Chi Minh City.

“Even if I had a diploma, I would still feel inferior and not dare (to apply for an office job).

“So I do this performance to earn money … (but also) whenever I am on stage as a woman I feel at ease,” said Nha Vy, who goes by this stage name as she sings, dances and deals out lotto tickets at her thrice-weekly shows with the Sai Gon Tan Thoi, or Modern Saigon, troupe.

Up until the 1990s, such performances were a regular part of rural life in the south but their appeal began to fade until Sai Gon Tan Thoi burst onto the mainstream nightlife circuit in 2017.

Boosted by a feature film that year and the hugely successful documentary Madam Phung’s Last Journey in 2014 that detailed the life of a monk turned head of a transgender troupe, Sai Gon Tan Thoi – and other modern rivals – started attracting more than a hundred people each night.

Much of the audience at the shows in Ho Chi Minh City and next door Binh Duong province is young, and view the rainbow of swishing gowns through their phone screens.

“We perform with our sweat, tears and blood – not just to sell fun but because I want people to understand this is a real profession,” said La Kim Quyen, a transgender woman, who has been performing with Sai Gon Tan Thoi and other lotto troupes – known as Lo To in Vietnam – since she was a teenager.

“I am happy with my life, with what I have achieved … earning enough for myself and my mother,” added the 39-year-old, softly dabbing blusher on her cheeks ahead of the night’s show.

Vietnam is seen as relatively progressive on LGBT issues – the one-party state lifted the ban on same-sex marriage in 2015 – although it stopped short of full legal recognition for the unions and a long-promised transgender law to allow legal gender changes has not yet materialised.

In schools, misinformation about sexual orientation and gender identity is rife and some children are taught by both teachers and parents that homosexuality is a mental illness, according to a Human Rights Watch report published this year.

Vuong Kha Phong, LGBT rights programme officer at Vietnamese non-governmental organisation iSEE, said shows that help promote visibility of sexual and gender minorities can boost tolerance but warned that while they were “a good first step”, they are not enough.

“While you may enjoy the show, you don’t really necessarily think about how they deserve access to healthcare or to good employment opportunities,” he said, explaining that transgender people had little access to mental health support or hormone therapy if they want to transition.

“If we don’t have more variety in visibility then transgender people will always be just the entertainment,” he said.

But for Nha Vy – who felt pressured by her family into having a child with her then-girlfriend so villagers would see her as a man – the most important thing is that she can be someone her boy can look up to.

“If anyone said anything bad about me, I don’t think he would be scared,” she said.

“I would want him to say: My father is LGBT … he can do lots of things and he is talented.”