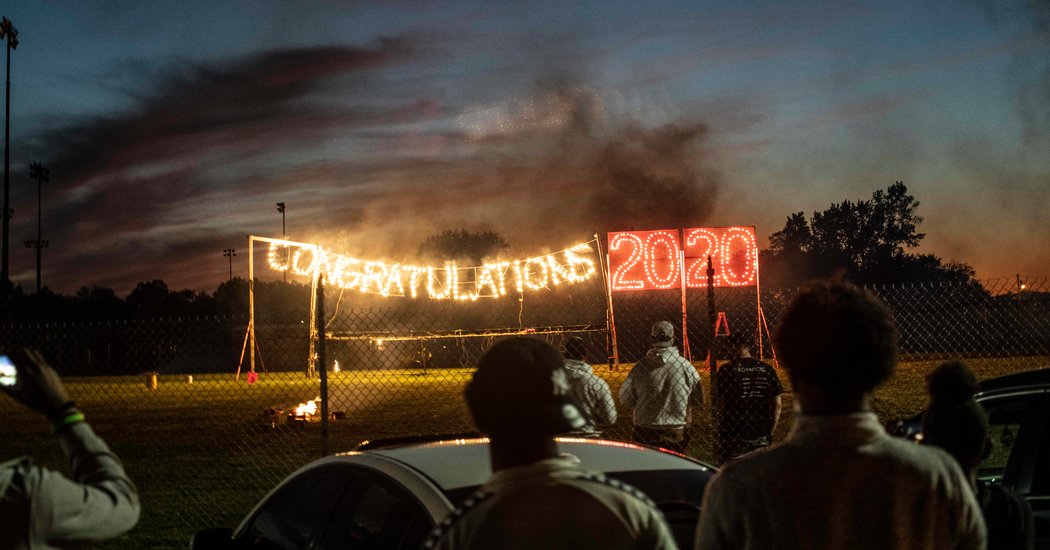 UNION, N.J. — At high schools across America, senior night is bittersweet even in the best of times. This year, it became just another milestone, alongside senior proms and graduation ceremonies, erased from the calendar by the coronavirus pandemic.

The exceptional few graduating seniors will get to continue their athletic careers in college. The majority will not. For them, senior night is often a powerful mix of memories, achievements and friendships, a final hour or two to cap years invested in competitive athletics.

But how do you celebrate a final season that never happened?

“Every high school kid looks forward to their senior year being the best one out of all four,” said Andrew Sanborn, the starting quarterback at Union High School in New Jersey, who was looking forward to one more baseball season before heading off to play college football.

His baseball season, like so many others, was canceled before opening day.

“It was going great in the beginning of the year,” he said, “but then everything took a turn for the worse.”

At Union High, a school serving a diverse student body within a tangle of highways just west of New York City, the athletic department was determined to salute its seniors as it always had done.

To do it, they invited the players to the school on an evening in late May to celebrate the athletes whose last chance to compete was sooner than they expected; to give teammates the opportunity to gather one last time; to talk about what had been achieved even as so much had been lost.

The teenagers shouted out the windows of cars as they pulled into the parking lot — greetings, whoops and pure squeals of joy shared between teammates who had not seen one another in person for weeks.

Organizers were resourceful in an era of social distancing. Set up as a drive-in affair, Union’s senior night was held alongside the school’s stadium. When student-athletes were out of their cars, a fence divided them from the adults. Moms and dads, who tagged along, reminded them and their friends to stay six feet apart. Coaches did the same.

“You’re too close,” rang out in the dusk during a fireworks display.

It was hard to look ahead. For some, it was worse to look back.

Marshaan Ebuenga-Smith, an honors student and the captain of the volleyball and track and field teams, wants to become a heart surgeon. She is off to the University of Delaware, where she hopes to join the Blue Hens track team.

But first she had to endure a harrowing couple of weeks after both her parents tested positive for the coronavirus. Her mother’s case of Covid-19, the disease caused by the virus, was severe enough that she needed to be hospitalized. She has since recovered.

Those nerve-racking months behind her, Ebuenga-Smith said she was grateful for a last chance to see her teammates.

“Not being able to spend the last moments with my class and friends is very heartbreaking due to knowing we will most likely never see each other again,” she said. “We all dreamed of the day we would throw our graduation caps in the air and say we made it with each other, but it has been taken away.”

This was the year Union’s track and field team expected to ascend to the top spot in the national rankings. Union was No. 2 when the national meet was canceled by the pandemic. Instead many Union athletes have been left to stay in shape by squeezing through a hole in the stadium’s fence and working out on the track, even though it is officially closed as a precaution.

“We were set to win it all,” said Brian J. Kwarteng, the senior class president, who plans to enroll at Tufts University, where he will compete in the 400-meter hurdles for the Jumbos.

For Elizabeth Arias, the pandemic and its effects have been important preparation for college and beyond. She was a four-year starter in softball and an avid reader. She thinks Benjamin Franklin was a wise man when he said, “Change is the only constant in life.”

“How has Covid transformed my senior year is quite simple,” she said. “It’s showed me that whether we like it or not we are all going to go through change, and it’s up to us to accept it and decide how we will move forward with it.”