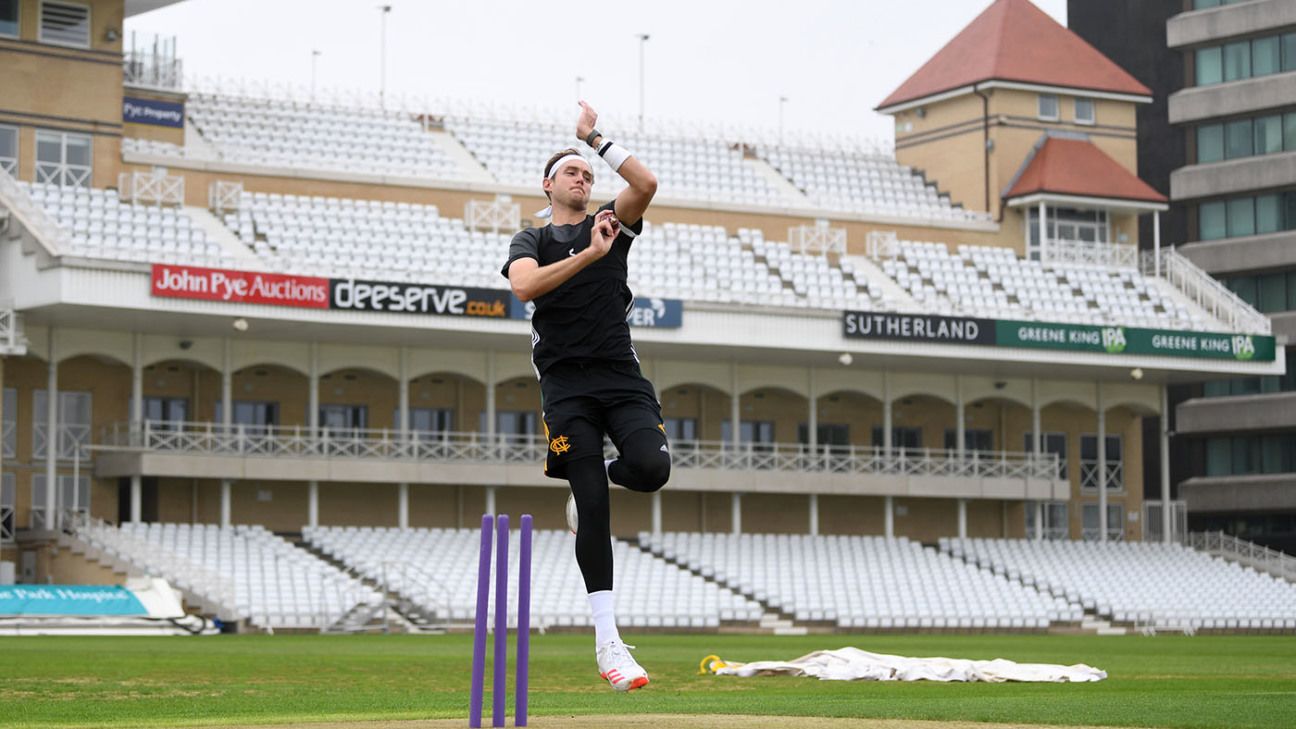 England seamer Stuart Broad has admitted to concerns that international cricket will offer “more of a mental test” than usual this summer due to the absence of fans from grounds.

All six of England’s Test matches this summer will be played behind closed doors, with the ECB confirming on Friday that the three Tests and three T20Is in Pakistan’s tour will be staged without supporters present in addition to July’s series against West Indies.

In a virtual press conference from England’s bubble at the Ageas Bowl, Broad revealed that he has been working closely with team psychologist David Young to find a way to “train his brain” into thinking he is in a normal Test-match scenario come July 8, and that has he taken on board his mother’s advice to replicating “the mindset of a 12-year-old”.

“I think the games will feel a bit different with no crowds,” Broad said. “International cricket certainly will be more of a mental test to make sure each player is right up for the battle, and I’m very aware of that. I’ve already spoken to our sports psychologist about creating a bit of a mindset around making sure I can get my emotions up to where they need to be for me to be at my best.

“If you put me in an Ashes game or a pre-season friendly, I know which one I’ll perform better in. So I’ve got to make sure my emotions are where they need to be for an international Test match, and that’s something I started working on in early June.

“It’s a worry for me, because I know that I perform at my best as a player under pressure, when the game is at its most exciting and when the game needs changing. And I know that there are certain scenarios that bring the worst out of me as a cricketer, and that is when I feel the game is just floating along and there is nothing [riding] on the game.”

The absence of fans may be felt especially keenly by Broad, who throughout his career has developed a reputation for bowling his best spells when feeding off the crowd’s energy.

In particular, Broad said that he hoped that by absorbing himself in battles against individual batsmen, he would be able to create “a bubble” around himself and bowl at his usual level of intensity.

“It might involve doing even more research into the opposition batsmen’s strengths and weaknesses so I’m very focused on getting in a competitive battle with the batsman instead of sometimes relying on the crowd to get your emotions going to be able to bowl at your best.

“I know that I do thrive off the energy of something happening in the game or a bit of excitement going on, or with a big battle going on. Maybe I’ll have to pick more of a battle with the opposition and bring my dad [Chris, the match referee] into it a bit more.”

Broad said that he had spoken to his mum, Michelle, before leaving for the Ageas Bowl this week, who had told him to try to remember how it felt to play cricket as a child.

“My mum said something to me before I left. She said: ‘take yourself back to being a 12-year-old kid when all you wanted to do was to play cricket anywhere you could’. I have a coffee in the morning overlooking a Test match ground: if you’d have offered me that as a 12-year-old – probably not a coffee back then – I’d have been buzzing. I’d have been so excited.

“[It’s about] trying to get that mindset of, yes, we’re playing a Test match for England, but when you were a 12-year-old kid, you’d have done anything to play cricket. Do you remember opening the curtains when there was a bit of rain on a Saturday? It was like heartbreak. It’s trying to have that mindset of it being exciting just to have the opportunity to play and have some fun. It actually gives you a bit of energy when you think like that.”

While Broad said that he felt “incredibly safe” and had no concerns about his physical health in the team’s bio-secure environment at the Ageas Bowl, he admitted to concerns about players’ mental health if things go wrong for them on the pitch.

“We’ve got to look after each other as players in this environment,” he said. “It is different being away from family and friends in the UK. If players go through tricky times while in this bio-secure environment – have a bad spell, have a bad day, have a bad week – you can’t escape the cricket at all mentally. If you nick off first ball, you’re then eating dinner overlooking the pitch that you’ve just nicked off on.

“If we get this wrong in these six, seven weeks then we could lose these series against two very good teams. We know the danger of both these teams. It’s probably the strongest West Indies side that I would have played against, certainly the bowling attack.