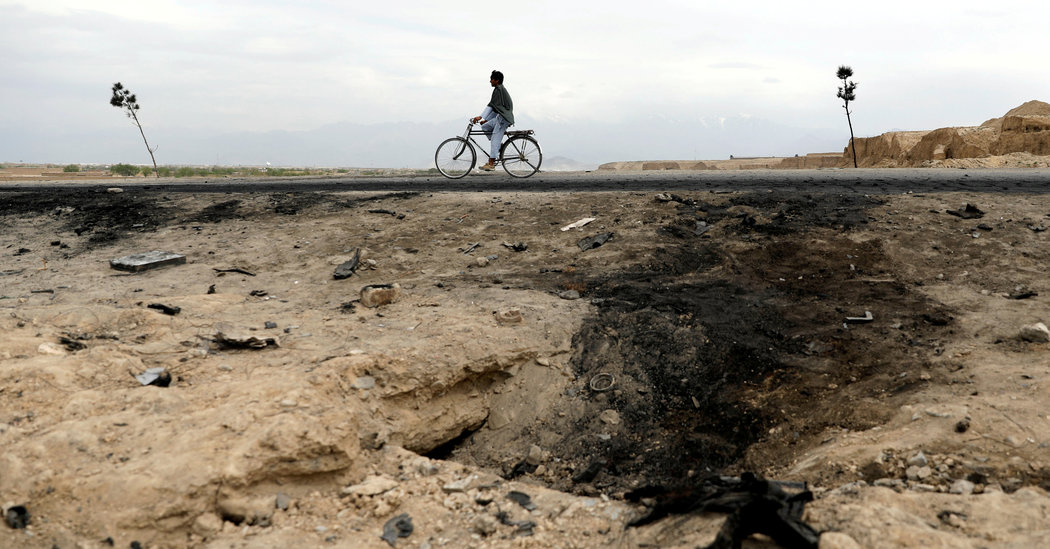 WASHINGTON — United States intelligence officers and Special Operations forces in Afghanistan alerted their superiors as early as January to a suspected Russian plot to pay bounties to the Taliban to kill American troops in Afghanistan, according to officials briefed on the matter.

The crucial information that led the spies and commandos to focus on the bounties included the recovery of a large amount of American cash from a raid on a Taliban outpost that prompted suspicions. Interrogations of captured militants and criminals played a central role in making the intelligence community confident in its assessment that the Russians had offered and paid bounties in 2019, another official has said.

Armed with this information, military and intelligence officials have been reviewing American and other coalition combat casualties since early last year to determine whether any were victims of the plot. Four Americans were killed in combat in early 2020, but the Taliban have not attacked American positions since a February agreement to end the long-running war in Afghanistan.

The emerging details added to the picture of the classified intelligence assessment, which The New York Times reported on Friday was briefed to President Trump and discussed by the White House’s National Security Council at an interagency meeting in late March. The Trump administration had yet to act against the Russians, the officials said.

Mr. Trump defended himself on Sunday by denying that he had been briefed on the intelligence, expanding on a similar White House rebuttal a day earlier, as leading congressional Democrats and even some Republicans demanded a response to Russia that the administration had yet to authorize.

The president “needs to immediately expose and handle this, and stop Russia’s shadow war,” Representative Adam Kinzinger, Republican of Illinois on the House Foreign Affairs Committee, wrote on Twitter.

Appearing on the ABC program “This Week,” Speaker Nancy Pelosi said that she had not been briefed on the intelligence assessment and had asked for an immediate report to Congress. She accused Mr. Trump of wanting “to ignore” any charges against Russia.

“Russia has never gotten over the humiliation they suffered in Afghanistan, and now they are taking it out on us, our troops,” she said of the Soviet Union’s bloody war there in the 1980s. “This is totally outrageous. You would think that the minute the president heard of it, he would want to know more instead of denying that he knew anything.”

Spokespeople for the C.I.A., the director of national intelligence and the Pentagon declined to comment on the new findings. A National Security Council spokesman did not immediately respond to a request for comment.

Though the White House press secretary, Kayleigh McEnany, claimed on Saturday that Mr. Trump had not been briefed about the intelligence report, one American official had told The Times that the report was briefed to the highest levels of the White House. Another said it was included in the President’s Daily Brief, a compendium of foreign policy and national security intelligence compiled for Mr. Trump to read.

Ms. McEnany did not challenge The Times’s reporting on the existence of the intelligence assessment, the National Security Council meeting and the White House’s inaction. Multiple other news organizations also subsequently reported on the assessment.

The officials briefed on the matter said the assessment had been treated as a closely held secret but that the administration expanded briefings about it over the last week — including sharing information about it with the British government, whose forces were among those said to have been targeted.

Republicans in Congress demanded more information from the Trump administration about what happened and how the White House planned to respond.

Representative Liz Cheney of Wyoming, the third-ranking House Republican, said in a Twitter message on Sunday: “If reporting about Russian bounties on U.S. forces is true, the White House must explain: 1. Why weren’t the president or vice president briefed? Was the info in the PDB? 2. Who did know and when? 3. What has been done in response to protect our forces & hold Putin accountable?”

On CNN, Senator Lamar Alexander, Republican of Tennessee, said that the reported Russian actions “would be consistent with the Russian practice over the last few years of doing its best secretly to try to undermine Western government, including the United States.”

In addition to saying he was never “briefed or told” about the intelligence report — a formulation that went beyond the White House denial of any formal briefing — Mr. Trump also cast doubt on the assessment’s credibility, which statements from his subordinates had not.

Specifically, he described the intelligence report as being about “so-called attacks on our troops in Afghanistan by Russians”; the report described bounties paid to Taliban militants by Russian military intelligence officers, not direct attacks. Mr. Trump also suggested that the developments could be a “hoax” and questioned whether The Times’s sources — government officials who spoke on condition of anonymity — existed.

Mr. Trump then pivoted to attack former Vice President Joseph R. Biden Jr., who criticized the president on Saturday for failing to punish Russia for offering bounties to the Taliban, as well as Mr. Biden’s son, Hunter, who is the target of unsubstantiated claims that he helped a Ukrainian energy firm curry favor with the Obama administration when his father was vice president.

“Nobody’s been tougher on Russia than the Trump Administration,” Mr. Trump tweeted. “With Corrupt Joe Biden & Obama, Russia had a field day, taking over important parts of Ukraine — Where’s Hunter?”

American officials said the Russian plot to pay bounties to Taliban fighters came into focus over the last several months after intelligence analysts and Special Operations forces put together key pieces of evidence.

One official said that the seizure of a large amount of American cash at one Taliban site got “everybody’s attention” in Afghanistan. It was not clear when the money was recovered.

Two officials said the information about the bounty hunting was “well-known” among the intelligence community in Afghanistan, including the C.I.A.’s chief of station and other top officials there, like the military commandos hunting the Taliban. The information was distributed in intelligence reports and highlighted in some of them.

Within the last several months, the assessment was compiled and sent up the chain of command to senior military and intelligence officials, eventually landing at the highest levels of the White House. The Security Council meeting in March came at a delicate time, as the coronavirus pandemic was becoming a crisis and prompting shutdowns around the country.

A former American official said that the intelligence analyst who briefs the president and the national security adviser, Robert C. O’Brien, working with his chief of staff, Mark Meadows, would have been involved in any decision to brief Mr. Trump on Russia’s activities. The director of the C.I.A., Gina Haspel, might have also weighed in, the former official said.

Ms. McEnany cited all three of those senior officials in her statement saying the president had not been briefed.

Ms. Pelosi said that if the president had not, in fact, been briefed, then the country should be concerned that his administration was afraid to share with him information regarding Russia.

Ms. Pelosi said that the episode underscored Mr. Trump’s accommodating stance toward Russia and that with him, “all roads lead to Putin.”

“This is as bad as it gets, and yet the president will not confront the Russians on this score, denies being briefed,” she said. “Whether he is or not, his administration knows, and some of our allies who work with us in Afghanistan have been briefed and accept this report.”

John R. Bolton, Mr. Trump’s former national security adviser, said on the ABC program “This Week” that he was not aware of the intelligence assessment, but he questioned Mr. Trump’s response on Twitter.

“What would motivate the president to do that, because it looks bad if Russians are paying to kill Americans and we’re not doing anything about it?” Mr. Bolton said. “The presidential reaction is to say, ‘It’s not my responsibility. Nobody told me about it.’ And therefore to duck any complaints that he hasn’t acted effectively.”