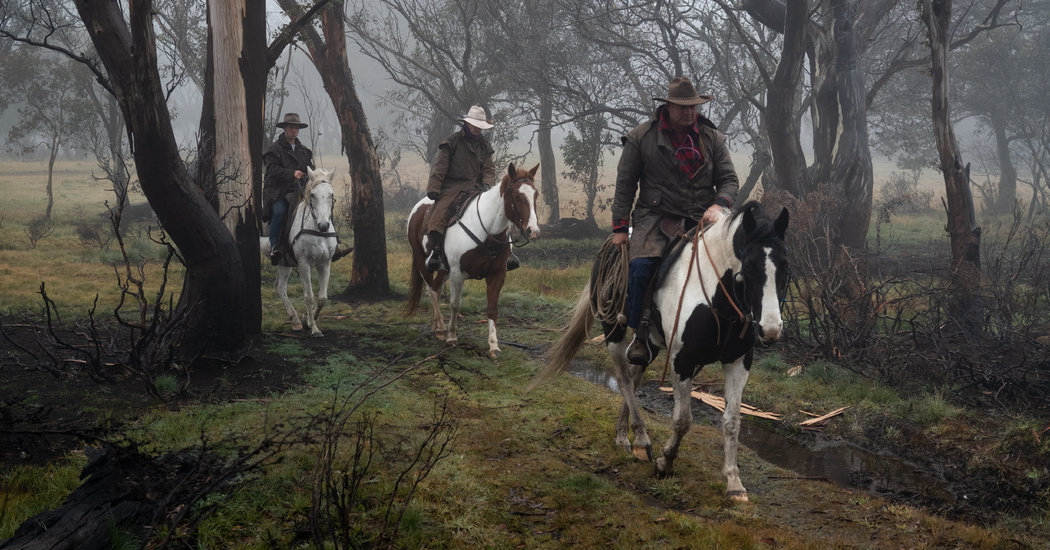 ANGLERS REST, Australia — Coming over the rise, Philip Maguire gripped the mane of his white gelding and rose on his heels to survey the bush land. He had hoped to be photographed mustering wild horses, but the animals weren’t playing along.

“They were sitting up there on that ridge,” Mr. Maguire said of the horses, now spooked by the human intrusion. “They’ll come back,” he huffed. “I’ll run them again.”

Mr. Maguire, a 60-year-old cattleman, is leading a campaign to prevent the Australian authorities from culling the wild horses, known as brumbies. The clash traces some of the country’s biggest fault lines, including its urban-rural divide and the legacy of colonialism.

To scientists and the politicians who support the policy, culling is a matter of environmental protection. The horses, an invasive species whose populations are booming, must be removed because they are trampling ancient ecosystems in the Australian Alps already hurt by climate change, they say.

To Mr. Maguire and his followers, the fight is about a way of life they perceive to be under threat. They see brumbies, the descendants of horses introduced by European settlers, as symbols of a rugged individualism that they believe is being lost in modern Australia.

“It’s a culture war,” Mr. Maguire said last month as he searched in vain for the horses.

A burly man, he wore a brown waterproof coat faded by years of wear. “This is my heritage,” he said. “All our culture is gone, by people saying anything that’s not native is not good.”

He was referring to the animals, though he may well have had people in mind, too.

Mr. Maguire’s lobbying for the brumbies is part of a backlash to a growing movement in Australia to correct historical narratives that cast white settlers as conquering an “empty” and untilled continent. Instead, there is now broad acceptance of Indigenous people’s careful guardianship of the land for tens of thousands of years, before their territories and culture were stolen.

These efforts have been buoyed recently by the protests against racism in the United States, which have inspired activists around the world to tear down symbols of colonialism.

Still, some Australians find it difficult “to recognize the dispossession and genocide of Indigenous Australians,” said James Pittock, a professor of environmental science at the Australian National University in Canberra. The brumby, he said, is a kind of “talisman” for those holding on to nationalist visions of Australia’s history.

In Australia, rural residents, who make up less than 30 percent of the population, have often been at odds with city dwellers and urban politicians, seeing them as out of touch and incompetent in their management of the bush. Brumby activists have taken action by lobbying for political favor in some states, where they have won protections for the horses.

In New South Wales, which is led by the center-right Liberal Party, former politicians with financial interests in tourism operations that depend on the brumbies helped drive a 2018 bill protecting the feral horses.

The move by the state, Australia’s most populous, dismayed Australian and international scientists, who said it would set a “disturbing precedent.”

In the state of Victoria, which has a center-left Labor government, officials say they intend to proceed with culling hundreds of horses after Mr. Maguire lost a legal battle there. He says he will take his fight to Australia’s highest court.

Still, to many Australians, brumbies are majestic, untamed creatures that live in children’s books, poetry and films. But leaving them to thrive in the bush, scientists say, would come at the expense of creatures and plants far more precious and rare.

“Our native animals are our brothers and sisters,” said Richard Swain, an Indigenous alpine guide who advises the Invasive Species Council, a conservation group. “It’s really, really, heartbreaking,” he added of the damage done by the horses.

In Australia’s alpine region, thousands of the feral horses trample fragile moss beds, damage the sources of major river systems and harm the habitats of animals found nowhere else in the world — systems that are struggling to recover from last summer’s unprecedented bush fires.

Last year, a survey of the region showed that the horse population had more than doubled in density in a five-year period. Claims by brumby activists that the animals are simply a scapegoat for damage done by wild deer and pigs do not hold up against extensive studies of the region, the scientists add.

“The evidence for this is not in dispute,” said David M. Watson, a professor of ecology at Charles Sturt University, south of Sydney, who quit his job advising the New South Wales government on managing the horses because he believed the science was being ignored.

A general distrust of science, fed by disinformation from the conservative media, has deepened rural Australia’s divide with the country’s urban areas. Of Mr. Maguire, Dr. Watson said: “Who do you put up against that person on a podium? Some crusty scientist with a clipboard?”

He and other scientists acknowledge that the culling is an ugly task to save other species, like the corroboree frog and the broad-toothed rat — which are found nowhere else in the world — from extinction.

“This is not about vilifying horses,” Dr. Watson said. But the stakes are immensely high, he added, when plants that have survived hundreds of millions of years in the harshest conditions are at risk of being wiped out in favor of the descendants of a common farm animal.

“In the blink of an eye, a couple of cowboys come in, wave their whips around, everyone gets all misty-eyed, and those lineages are relegated to the dustbin,” he said.

Many brumby activists argue that the animals should be captured and moved to sanctuaries instead of being killed. In the United States, park authorities spend more than $50 million annually to manage booming mustang populations, which are protected from culling by federal law.

“We can catch them, that’s no problem,” said Lewis Benedetti, a horse tamer from Mount Taylor, about 175 miles from Melbourne, who has previously mustered the feral horses on contract with the state authorities and who advocates finding new homes for them.

Mr. Benedetti leapt onto the bare back of a brumby he had tamed to show how placid the animal was. “They want to shoot them,” he said. “Doesn’t that make you upset?”

While it may be possible to move the horses to sanctuaries in small numbers, these programs are difficult to scale up, experts say, especially without adequate funding, as the out-of-control mustang numbers in the United States show.

In late May, Mr. Benedetti and a handful of other activists gathered at Mr. Maguire’s property, from which they made their way on horseback toward the foothills of the Australian Alps. They said they planned to round up the brumbies and take them to safety on his land.

All around, the bush was decimated: Buds sprang from tree trunks blackened by the recent fires, while other trees were toppled entirely. Nearly all that remained of moss beds were muddy puddles — the impact, scientists say, of the recent fires, as well as hard-hooved horses trampling a landscape accustomed to native soft-footed creatures like kangaroos.

Leading the group toward a cattleman’s hut built by his great-uncle, Mr. Maguire began to recite the poetry of Banjo Paterson, an Australian author and journalist who documented the decline of pastoralism and, along with it, a wild Australia.

“Australia has lost its affinity for the bush,” Mr. Maguire said, echoing Paterson in his own words. “We’ve become a different kind of people.”