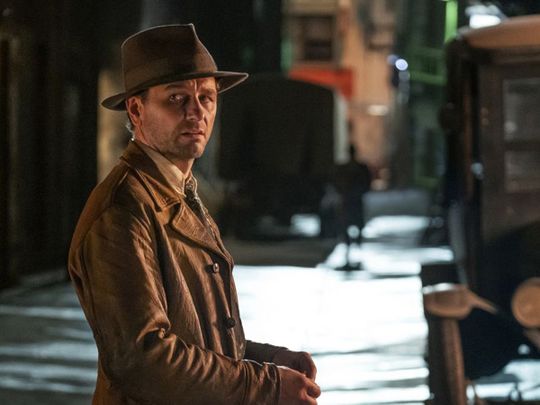 When Matthew Rhys learned of a planned ‘Perry Mason’ remake, he had one question: “Oh God, why?”

Rhys, 45, who played a Soviet sleeper agent in the FX espionage drama ‘The Americans’ and a troubled journalist in the Mister Rogers movie ‘A Beautiful Day in the Neighborhood’, hadn’t read the Erle Stanley Gardner novels about Perry Mason, the defense attorney who never met a case he couldn’t clobber. But as a kid, he had seen, over the shoulders of his grandparents, reruns of the original ‘Perry Mason’ series from the 1950s and ’60s, which starred a bluff Raymond Burr.

Rhys had quickly absorbed the formula: A murder is committed. A suspect is arrested. Perry takes the case. Under his questioning, the real perpetrator breaks down, usually on the stand.

Two years ago, Rhys’ agent mentioned the new series. “I was like, ‘Perry Mason?’ No. No,” Rhys said. Perry broke him, too.

The first of eight ‘Perry Mason’ episodes air on OSN in the UAE, with Rhys, in his first proper series lead, continuing his exploration of bruised, bruising men. A de-cozied departure from the books and the original series, this bleak and occasionally comic version, set in Depression-era Los Angeles, follows a lurid single case — the murder and mutilation of a baby. Unbathed, oaked, allergic to a close shave, Rhys’ Perry gets his gut punched, his chest burned, and kicked for good measure. Thugs crumple his fedora.

He was speaking, in a Welsh accent like plinked piano keys, from a borrowed house in the Catskill Mountains, where he and his partner, actress Keri Russell, had retreated in March with their young son and Russell’s two children from a previous relationship. Cell reception was spotty there and Wi-Fi unreliable. (“It has the same mood as our four-year-old and will cooperate when it wants to,” Rhys said.)

Even the landline sometimes dropped out, usually after Rhys said something grandiose about the human condition.

“I downloaded the app Pretentious Actors,” he joked. “It mutes you when it gets a whiff of it!” He was illustrating a maxim a half dozen of his colleagues had repeated: Rhys takes his work extremely seriously, but he takes himself much less so.

Raised in Cardiff, Wales, and educated at the Royal Academy of Dramatic Art in London, Rhys’ career ran hot and cold until Joel Fields and Joe Weisberg cast him alongside Russell in ‘The Americans’, a drama about Russian agents posing as American citizens. As Philip Jennings, Rhys, who won an Emmy for the role, wore internal conflict as comfortably as one of the character’s windbreakers, layering complex emotions one atop the other.

Shortly after ‘The Americans’ finished, he began shooting ‘A Beautiful Day in the Neighborhood’, playing another unsettled character, magazine writer Lloyd Vogler. Marielle Heller, who directed that film, described an actor with an almost worrying lack of vanity and a talent for probing a character’s dark places. “He likes to go into the depths of human psychology,” she said.

When she heard that he had signed on to ‘Perry Mason’, she added, she wondered, “Why would that be what he would pick?”

The Perry that Gardner invented — and pursued through dozens of books from the ’30s through the ’60s, with more than 300 million copies sold — is a behavioral vacuum. He’s a suit, mouth and fist where a man should be.

The first Perry Mason book, ‘The Case of the Velvet Claws’, offers negligible psychology and a single physical tidbit: “His face in repose was like the face of a chess player who is studying the board. That face seldom changed expression.”

Rolin Jones and Ron Fitzgerald, showrunners of this new series, read the first eight books. “We were like, we’re never going to find out if this guy even likes lasagna,” Jones said in a conference call.

Producer Susan Downey, who had begun to develop this new ‘Perry Mason’ as a vehicle for her husband, actor Robert Downey Jr., brought the project to them three years ago. Jones and Fitzgerald had the idea of creating a prequel, filling in backstory and emotional life.

“We wanted to create a real character,” Fitzgerald said.

In 2018, HBO gave ‘Perry Mason’ the go-ahead. Scheduling conflicts left Downey Jr. unavailable for the lead role (both Downeys stayed on as executive producers), and the showrunners quickly thought of Rhys. During a meeting at Dumbo House in Brooklyn, New York, and then over a giant seafood tower at a nearby restaurant, they helped him work through his doubts.

How? They told him a story, a story about a wounded man who stumbles into a murder case and finds purpose in seeking justice. They gave him the first script, which shows Perry drunk, beaten, sexually battered by an aviatrix. Initially, he isn’t even a lawyer — he’s a squalid private investigator who snaps in flagrante photos when he’s not doing snoop work for a defense attorney, played by John Lithgow, with a foundering practice.

“I was in,” Rhys said. “I wanted to know how this guy gets to the Perry Mason that we all think we know and love.”

He had some idea as to why the showrunners had reimagined a capable, no-nonsense attorney as a schlemiel with unresolved trauma. “Tragedy sells!” he said, laughing. “Load the bases! Load the bases!” He prefers troubled men, he said.

“There’s a lot to do!” he said. “There’s like eight things you have to play at any one time.” He also attributed it, tenuously, to ethnicity.

“The Welsh, as part of the Celtic family, we’re melancholy,” he said.

Heller, his ‘Beautiful Day’ director, had another theory. “I wouldn’t just say he’s just a happy, light person,” she said. “He’s somebody who I think has found this very healthy medium for working out his own inner turmoil, which is acting, getting to inhabit other people.”

The Perry of the HBO series, so often at the wrong end of a punch, rarely seems like a hero, anti or otherwise. But he is the show’s undisputed lead, whereas Rhys has usually appeared as part of an ensemble or as a co-lead. “The pressure certainly wasn’t lost on me,” he said. “I certainly felt it.” He tried to set an example for the company — cheerfully, without fuss — modeling an even-tempered work ethic, seeing to the morale of cast and crew.

“There’s this wonderful discipline about him,” said his co-star Juliet Rylance, who plays secretary Della Street, a femme foil for Perry. “But he’s also the first person to make a fool of himself.”

Is a punch-up in a Chinatown brothel or a casual roadside stabbing the kind of fooling people want now? If this ‘Perry Mason’ ultimately delivers the comforts of justice served and wrongs righted, it takes its sweet and often morbid time, which may or may not keep viewers returning. Perry doesn’t even shave until Episode 6.

Rhys said that he and Russell had been talking about the art uncertain times demand. (The art they’re demanding in the couple’s household: Mostly ‘Toy Story’ movies. Rhys cries.)

“I’m a lot more cynical in my outlook,” he said. “Keri’s a lot more like: ‘We should be making uplifting things at this time. That’s what people need!’”

Will they need ‘Perry Mason’? The jury, as Della might say, is out.

Rhys isn’t against uplift. Before his phone went out again, he had been saying something about children and mortality and conflicts within the self, but he can stomach cheer and stability.

‘Perry Mason’ airs in the UAE on OSN Series First and the OSN platform. New episodes drop every Monday.