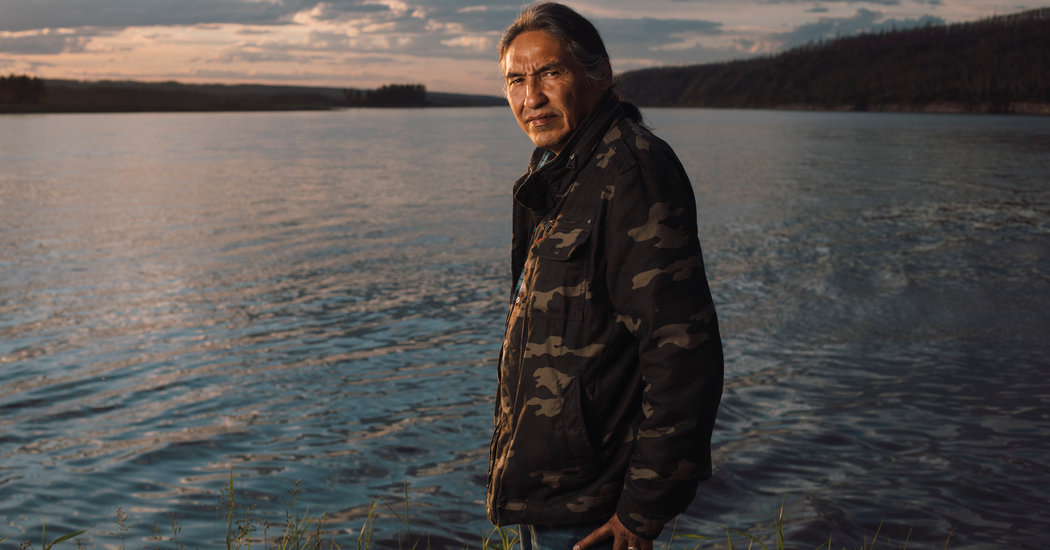 TORONTO — He survived Canada’s notoriously abusive schools for Indigenous children and went on to lead his own nation. He battled governments and oil giants over the pollution of his traditional territory, garnering him the praise and admiration of Desmond Tutu, Greta Thunburg and celebrities like Leonardo DiCaprio.

But when police officers double-teamed Allan Adam, the outspoken leader of one of Canada’s First Nations, tackling him to the pavement and punching him over an expired license plate, he said they treated him as though he were voiceless and powerless.

“They did it to the chief. Not just any chief,” said Mr. Adam, the leader of the Dene nation of 1,200 people in northern Alberta, which famously fought for its rights in the midst of an oil boom affecting its territory. He was someone known, he said, to “not back down from a fight.”

“They shouldn’t have picked me,” Mr. Adam said in a phone interview from his home in Fort Chipewyan on remote Lake Athabasca. “They made a mistake.”

Mr. Adam was charged with assaulting a police officer and resisting arrest. On Wednesday, the charges against him were dropped.

But videos of the police beating an unarmed man have prompted not just an investigation into the officers involved, but also outrage across Canada, with growing demands for an overhaul of the country’s policing system, which imprisons Indigenous and black people at highly disproportionate rates.

“We have to seriously open the eyes of every nonnative Canadian to the realities that we, as Indigenous people of the land, have had to live with for decades,” Mr. Adam said at a news conference last week.

Mr. Adam was the youngest of 11 children. His father was a hunter and trapper who supported the family by fishing and harvesting furs.

Just before his sixth birthday, Mr. Adam was dropped off at a brick building on the edge of town: the Holy Angels residential school. His three years there are still too painful to discuss, he said in the interview.

The schools, though mostly established by religious orders, were used by the Canadian government for more than 160 years to assimilate Indigenous children forcibly, removing them from their families and cultures.

A national Truth and Reconciliation Commission declared them tools of “cultural genocide” five years ago in a report that documented widespread physical and sexual abuse and thousands of deaths.

“When I think of residential school, I think of death, rape and physical abuse,” said Mr. Adam, who lost fluency in his native Denesuline language while at the school, where he feared being hit for speaking it.

“Horrific stories I suffered at the hands of nuns and priests and schoolteachers,” he said.

Mr. Adam said he took up drinking and smoking at age 9, after leaving. Most of his classmates from that time, he said, are dead.

Reconnecting to the land saved his life, Mr. Adam said.

When he was a child, his parents would take him out into the boreal forest for five months a year, teaching him to fish, trap and hunt.

His father taught him to shoot a moose during mating season by standing still in darkness, waiting for the crashing sound of the animal’s approach.

“Until today, I still can’t master it,” he said, laughing.

After seventh grade, Mr. Adam left school, he said, “when the trauma started coming back.” He worked as a firefighter and truck driver as well as for his nation’s housing authority, among other jobs. He went to prison four times for assault, he said, because he would not back down from a fight.

He found his calling once he was elected to the government of his nation, which has land in central Canada around Lake Athabasca and the Athabasca River.

Four years later, in 2007, he was elected chief on an economic development platform to exploit the nearby upriver oil sands, which had grown from a single mine in his childhood to a sprawling landscape of smokestacks and tailings ponds.

A few weeks after his election, Mr. Adam attended a town meeting where a researcher detailed his troubling findings about the local water quality: heightened levels of carcinogens and toxic substances like arsenic and mercury.

It echoed a local doctor’s warning about concerning rates of rare cancers in the town.

“I thought to myself: ‘Oh, wow. There goes the economic plan,’” Mr. Adam said.

Soon after, he and his council began their first lawsuit against the government, arguing that recently awarded oil sands leases in their area be rescinded, as they had been provided without consulting local Indigenous communities.

They lost the case, but he garnered a reputation as an outspoken chief who would not back down.

Over the next decade, he helped start more than a dozen legal actions, holding conferences and protests.

“He steps up when he has to,” said Melody Lepine, the director of government and industry relations for the Mikisew Cree First Nation, also based around Fort Chipewyan. “He has no fear to do what’s right and be vocal.”

Mr. Adam became a favorite among people campaigning against pollution and climate change, of which Canada’s oil sands became a growing symbol.

Tzeporah Berman first met him in 2008, with Sting and the Canadian actress Neve Campbell.

“What he has consistently done is bring in the most up-to-date scientific information on toxins in the air and water and human health impacts, and bring them into lawsuits that drag on for decades,” said Ms. Berman, a Canadian environmentalist who ran Greenpeace’s climate and energy campaign. “Meanwhile, development is encroaching further and further into their land.”

In 2014, Mr. Adam traveled with Neil Young on a cross-Canada tour, raising hundreds of thousands of dollars for his lawsuits. Soon after, Mr. DiCaprio visited and offered to fund the community’s water monitoring program.

His activism also made him enemies.

Right-wing media and oil lobby groups labeled him a “prop.” He was regularly confronted by angry oil sands workers in Fort McMurray, his lawyer said, where Mr. Adam had bought a second home with the residential school settlement he had received from the Canadian government. There were death threats, Mr. Adam said.

In 2018, Mr. Adam was criticized for the opposite reason: signing a deal with Teck Resources to build the biggest oil sands mine to date, inside the area he had long maintained should be protected.

At the time, he said, he was both heartbroken and exhausted from fighting the system, with no tangible results. This way, at least, his people would get some benefits and a seat at the table.

Teck withdrew its application earlier this year, citing an unresolved debate in Canada over climate change and resource extraction.

“If I knew all along, all we had to do to kill these projects was to agree to them, we would have agreed a long time ago,” Mr. Adam said, laughing.

“That’s the gray area he has to dance in all the time,” said Eriel Deranger, who was Mr. Adam’s communications coordinator until 2017. “It’s a total hypocrisy that’s forced upon our nation. ”

Mr. Adam had signed agreements with mining companies before, in exchange for financial benefits and environmental guarantees. That money was put into projects like a community-owned grocery store in Fort Chipewyan, but also into a long-term trust he hopes will be used to buy a new home for his nation.

“Our people will be environmental refugees,” Mr. Adam said, because the land will be polluted so badly by the oil industry. “I figure we’ve got 25 years left.”