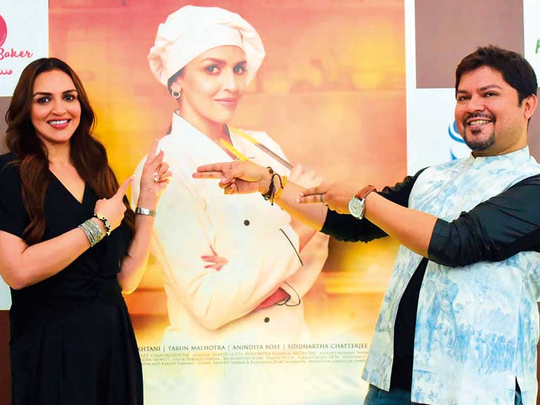 Ram Kamal Mukherjee, who worked with actors including Hema Malini, Esha Deol, Celina Jaitly and Lillette Dubey for films ‘Cakewalk’ and ‘Season’s Greetings’ shares his journey as an outsider and how he is trying to crack the Bollywood code:

“My struggle never ended. And I guess, it would never end. Not at least till the time I intend to work. You need to be Abhimanyu to survive the chakravyu. It’s a war, and everyone is playing their own game. I realised that 20 years ago when I shifted my base from Kolkata to Mumbai. It takes time to be a part of a group in Bollywood, just as you would take time to know your fellow passengers if you suddenly board a train without a reserved seat.

“So when I decided to move on from journalism to film making, I realised that it wasn’t a ‘Cakewalk’. Financiers would ask me to get a big star, a cross-section of stars who pretended to be my best friend until then disappeared overnight. Maybe they didn’t want to associate with me anymore. So when I used to meet them with scripts (initially I wanted to produce films) they would ask me to route it through their managers. Fair enough. But after making me wait for three to six months (rigorous follow ups later) they would turn down the offer. Same happened with the Bollywood studios, they would meet and ask me to get an A-list actor on board first. They didn’t care much about the content.

“So for me, it was a catch-22 situation. My struggle continued till I met few people who claimed to have enough finances to make a feature film. I trusted them and we rolled our dream project. I was working as creative producer. Just before the shoot, the investors backed out citing demonetisation as a reason. The project fell off the hook like a house of cards. I decided to go back to writing and write two books titled ‘Long Island Iced Tea’ and Hema Malini authorised biography ‘Beyond The Dreamgirl. Following those projects, people began started taking me seriously again. This time around, they looked at me as individual identity. My friend and genuinely good soul Deepika Padukone agreed to launch the book and amidst massive fanfare the book was launched. Indian Prime Minister Narendra Modi wrote the foreword and that caught attention of my detractors.

“Oh! he survived?” they smirked.

“The next big leap was when I decided to direct my first film ‘Cakewalk’ with Esha Deol. Of course, I didn’t have the money to make a film. But I had the will and honesty. I went from one office to another to convince people to give me a chance. From Bandra to Aram Nagar, I knocked on almost all doors (including some established production houses who treated me coffee and showed me the door). Finally Aritra Das, Shailendra Kumar and Dinesh Gupta joined hands and invested in my vision. I promised them that I will return their investment and also give them profit. I didn’t have any approval from studios or any platform even then. I took that risk and made my first short film ‘Cakewalk’. I missed the deadline, but they waited with patience.

I started knocking doors, once again. Everyone discouraged me saying? “YouTube pe dal do, itni mehengi short film kaun kharidega?” [Why don’t you release ‘Cakewalk’ on YouTube? Who will buy such an expensive short film?]

“I didn’t have the courage to tell my producers that I might not be able to return their investments. I didn’t want to break their faith. That’s when I met Raj Nayak from Viacom18 and he watched the film. He agreed to release the film on his channel. Gradually, I could see the silver lining at the end of the tunnel. Eventually ‘Cakewalk’ broke all possible records that a short film could even imagine. From its first look launch in London to is grand premiere in Mumbai and a music launch in Dubai, my short film ‘Cakewalk’ won 17 international awards to becoming India’s first short film to be premiered on satellite television. We broke and shattered all myths and my success gave hope to other makers to pursue their dreams.

“We didn’t make any money, in fact after paying our dues and debts we were in the minus. But economics didn’t didn’t take away our determination. We wanted to fight the battle.

“We started our second film ‘Season’s Greetings’ with Celina Jaitly Haag and Lillette Dubey, immediately after ‘Cakewalk’. This time the struggle became tougher. People laughed at us saying that why did we make another expensive short film? Festival directors would reject our films and studios would refuse to meet us, but we didn’t give up.

“There were days when I skipped meals to save money for the next day. My savings dried up and my wife mortgaged her jewellery to run the house. Investors were breathing down our neck to refund their money. Finally it was Tarun Katiyal and Jay Pandya from the streaming platform Zee5 who trusted in our vision and acquired the film.

“I am grateful to acting legends like Amitabh Bachchan for supporting our short film. Truth be told, I did reach out to many actors from Bollywood to support my independent cinema. I requested them to watch and tweet, while some were extremely gracious, others sneaked out with some excuse or the other. The so-called young brigade who are writing on social media about reach out to independent cinema are precisely the ones who didn’t respond to texts, calls or emails. As a journalist, I have always stood by their films and endeavours, but they have not even bothered to wished me. Some even replied saying, “Sorry, I have to check with my social media manager if I have a window in my timeline to accommodate your tweet.”

“They are the same set of people who would ask me to support and tweet when their films released. They still do. And I still oblige.

“But by the grace of God, and support from media and few industry well wishers, I managed to sail through the tough times. I want to make good cinema and I want to be a part of this system. I am standing with open arms like Shah Rukh Khan == hoping for a jadoo ki jhappi [alluding to a dialogue from actor Sanjay Dutt’s life-affirming blockbuster ‘Munna Bhai MBBS] — from this industry. I know I will survive.”