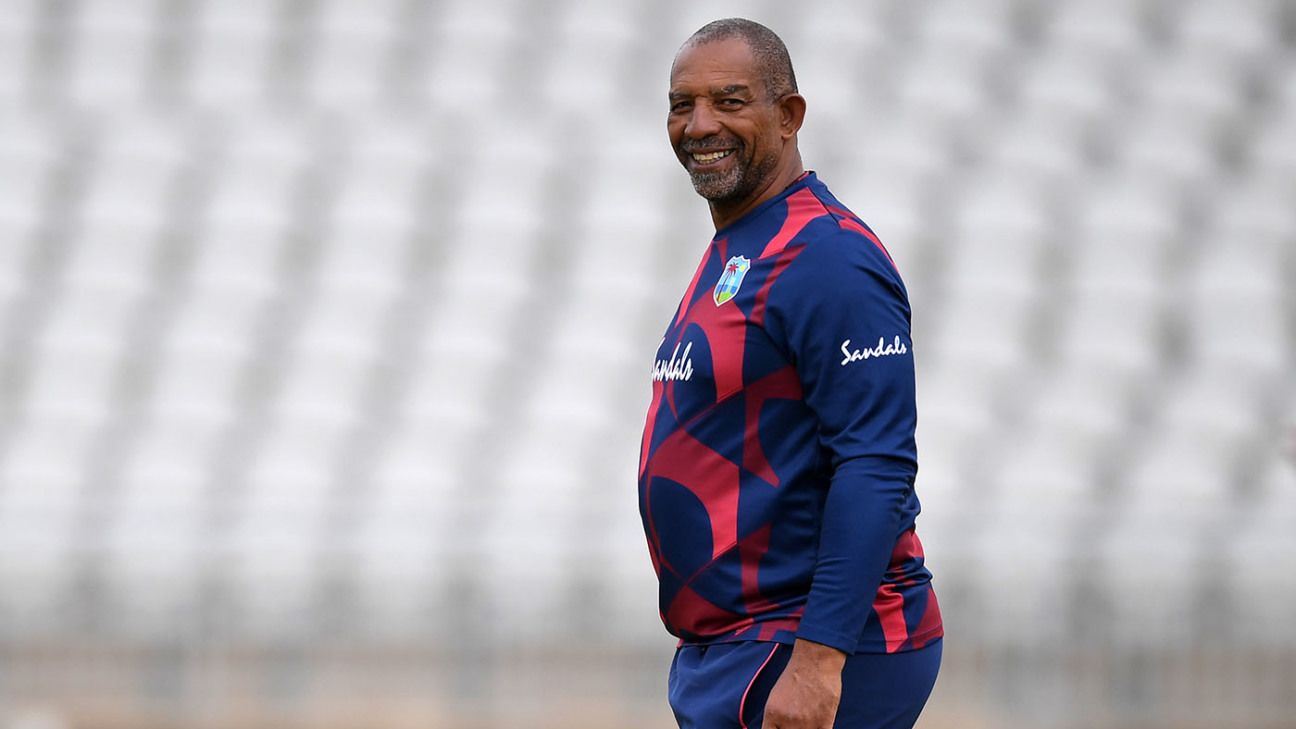 Alzarri Joseph has downplayed the significance of the news that West Indies head coach Phil Simmons is self-isolating in his Old Trafford hotel room as a health precaution.

Simmons left the West Indies’ bubble to attend a funeral on Friday, and has been self-isolating since then in his room on-site. He will watch the squad’s second intra-squad warm-up game from his balcony this week, and will be permitted to join back up with the group on Thursday if he returns two negative Covid-19 tests.

That means that the burden will fall on assistant coaches Roddy Estwick and Rayon Griffith ahead of the four-day, first-class fixture that starts on Monday, with Floyd Reifer helping out as batting coach.

A CWI spokesperson confirmed that Simmons “is in self-isolation currently” on Saturday after the Daily Mail broke the story, but Joseph said that it would not present the team with any major problems.

“That doesn’t really disrupt our preparations,” he said. “We have our jobs to do – we have our preparation to keep going with. We have a very big coaching staff here that are very supportive of each other, so that’s not really a problem for anyone.”

Joseph, who looks set to form part of a four-man seam attack in the first Test along with Kemar Roach, Shannon Gabriel and Jason Holder, said that he hoped he could use any perception of him as a “weaker link” to his advantage.

“Obviously those three guys have a lot more experience than I do,” he said. “I’d think more often than not, teams would see me as the weaker link. I think my job is to come in and just back those bowlers [up] and keep the pressure on.

“It’s not necessarily because of age, but because of the number of matches I’ve played compared to the other three bowlers. I could use it as an advantage – I know my abilities and they [England] might not know. But once I turn up on the day and get the job done, I know I can get on top of any opponent.

“I see this tour as an opportunity for me to help the team to get higher up the rankings. Any opportunity I get to play, I’ll take it, and whatever the captain and the team require me to do, I’ll put my best foot forward.”

Joseph took six wickets in this week’s warm-up game, including that of Shai Hope in each innings, and said that he felt as though he was hitting his straps well heading into the series.

“[The 2017 tour] was a really big learning experience for me, my first time in England. So I have some experience here now – I know how to bowl in these conditions my second time around.

“The ball does a bit more here in England than in the Caribbean. It’s just some slight adjustments, nothing too big but some simple adjustments. For me, I think it’s about being consistent round that good area, extracting whatever movement you can get off the pitch, and sticking to plans as long as possible.”