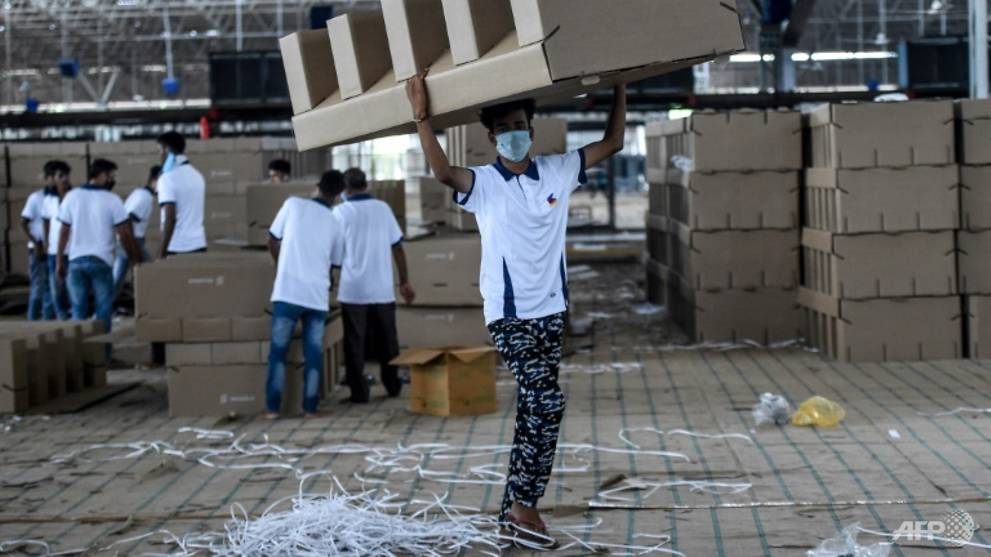 NEW DELHI: Staff at the luxury Suryaa hotel used to wear bright saris as they welcomed guests. Now they must don medical suits and handle gurneys as New Delhi desperately prepares for a predicted surge in coronavirus cases in the coming weeks.

The pandemic is still raging in India with more than half a million cases. The capital, home to 25 million people, is the country’s worst-hit city – its hospitals at breaking point and authorities reaching deep to confront the crisis.

“For doctors and nurses it is a part of their lives. For us this is a totally new experience and a very difficult one at that,” said Ritu Yadav, operations manager at the five-star Suryaa, as staff in masks rush to deep clean the building.

“We have got training from the hospital on how to wear the PPE (personal protective equipment) and then take it off but this is something I never thought I would have to do when I chose hospitality as my career.”

Delhi, home to some of India’s most crowded slums, has around 75,000 cases so far, but the city government predicts this will soar to half a million by the end of July.

With newspapers full of reports about patients being turned away from overflowing hospitals, Delhi told the city’s hotels earlier this month they would be roped in to provide hospital care.

It is also converting wedding halls, and has several hundred repurposed railway coaches standing by – without air-conditioning despite outside temperatures over 40 degrees Celsius.

The Delhi authorities have even started converting a spiritual centre or ashram into a coronavirus isolation facility and hospital with 10,000 beds, many made of cardboard.

But for hotels, the move triggered outrage in an industry already reeling under losses because of travel restrictions.

The owners of Suryaa and four others approached the court, arguing many staff were over 50 and therefore were high-risk themselves, with no experience of hospital care or handling bio-medical waste.

“It came as a shock because we were not spoken to about it, we got to know through the press,” Greesh Bindra, a top executive at the hotel, told AFP.

“It’s like you are sleeping in a hotel and the next morning when you wake up you are told your hotel has become a hospital. Your first reaction will be how is this possible. We are hospitality, not a hospital.”

The hotel won a reprieve from the court – of sorts.

Instead of becoming a hospital, it could act as a COVID-19 care centre, housing patients on their way to recovery with mild to moderate symptoms.

It and around 30 other hotels in Delhi are set to be attached to hospitals which will provide staff to deal with any emergency.

The hotels can charge a maximum US$66 a day, including meals. But they and their employees, used just to changing bedsheets and providing room service, have had to improvise and innovate.

From using disposable plates and drawing red lines to ensure social distancing, they have minimum contact with their special guests.

“You have to keep your staff safe as after all they are your people,” said Bindra, whose hotel will be offering 200 beds.

But whether the efforts of the Delhi government – which is squabbling with the federal government of Prime Minister Narendra Modi – will be enough is unclear.

Delhi has just over 13,000 beds for coronavirus patients in state-run hospitals with another 10,000 in private ones. The city government forecasts it will need 80,000 beds by the end of July.

The government has cancelled leave of all healthcare staff and plans to rope in volunteers to fight the crisis.

It has refused to reimpose a lockdown, as the southern city of Chennai has done.

Many in Delhi are worried and are taking matters into their own hands.

Some resident welfare associations are buying oxygen cylinders and other equipment, while using vacant flats as isolation wards – exposing the lack of trust in authorities.

“One of our residents lost his life just because he couldn’t get a bed in time. Then we thought we should do something at our level,” said Lokesh Munjal, the head of a west Delhi housing society.

“We don’t want to be at the mercy of government and hospitals.”