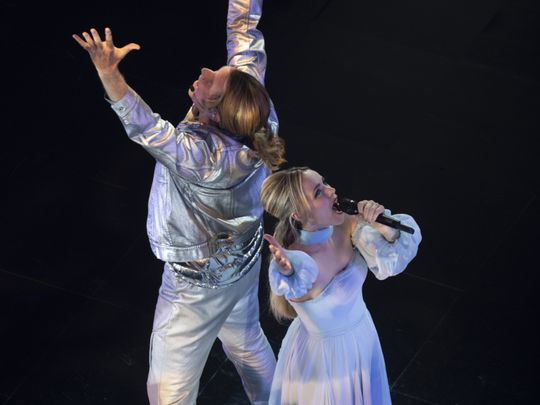 As Will Ferrell movies go, ‘Eurovision Song Contest: The Story of Fire Saga’ ranks somewhere in that vast, gray, paunchy middle area, perhaps wedged just above the waistband of ‘Zoolander 2’ but just below the belly button of ‘Kicking and Screaming’.

If the movie, about an inept Icelandic music duo with dreams of winning the annual Eurovision Song Contest, fails to achieve the inspired lunacy of an ‘Anchorman’, it is nevertheless nowhere near as bad as, say, ‘Holmes and Watson’.

And maybe that’s all we need, in this summer of COVID-19, when even an unexceptional Will Ferrell comedy is better than none at all.

Ferrell plays Lars, a singer whose childhood dream has been to make it to Eurovision, an international singing competition that, since 1956, has brought European countries together in song (along with Australia in 2013). With its chief claims to fame being the 1974 win by ABBA, and Celine Dion’s win in 1988, it is mostly known for its propensity for synth-heavy power ballads by preening performers you’ve never heard of. (The over-the-top silliness of the acts is something the film embraces only halfheartedly, yet it provides most of the film’s gentle chuckles.)

It is in 1974 that ‘Eurovision’ opens, with the Swedish band ABBA’s ‘Waterloo’ playing on a TV in Husavik, Iceland, inspiring a young Lars to dreams of pop stardom. Fast forward to the present day, with Lars, sporting a mane of Fabio-esque hair, rehearsing with his platonic singing partner Sigrit (Rachel McAdams), who, predictably, has always loved him.

Their unrequited romance is a necessary throughline — without it this might be a ‘Saturday Night Live’ sketch — but it provides more padding than genuine pleasure. A subplot involves the estrangement between Lars and his emotionally withholding father (Pierce Brosnan), who calls his son an “idiot.”

The jokes, such as they are, have more to do with the cheesiness of Lars and Sigrit’s act, known as Fire Saga, and their almost miraculous path from Husavik to Edinburgh, Scotland, where the Eurovision contest is being held. There, through a fluke involving a boat explosion that kills every other Icelandic contender for the Eurovision slot, Lars and Sigrit find themselves competing in the semifinals against singers much, much more talented than they are (if no less bombastic).

These include Dan Stevens’s Alexander Lemtov, a Russian basso-profundo sleazeball with blue eyes only for Sigrit. Singer Demi Lovato makes a brief cameo as an Icelandic pop star killed in the boat explosion, but her appearances are mostly as a bloodied, armless ghost.

Speaking of wasted opportunity, there’s plenty of fodder here to make fun of Eurovision, but it’s hampered by the fact that many Americans don’t really know anything about the contest, and the jokes, if there were more of them, would probably fly over our heads. In any case, neither the film’s writers, Ferrell and ‘Saturday Night Live’ veteran Andrew Steele, nor its director, David Dobkin (‘Wedding Crashers’), seem especially interested in making a ‘Spinal Tap’-style parody. At heart, ‘Eurovison’ seems content to be more dumb rom-com than sharp music satire.

Surely there are worse ways to spend time than with Ferrell, in metallic silver eye makeup and a Viking helmet, singing something called ‘Volcano Man’. But as over-the-top as that sounds, I can’t help feeling that there isn’t nearly enough of it, and that the actor just isn’t trying very hard.

‘Eurovision Song Contest: The Story of Fire Saga’ is out now on Netflix.