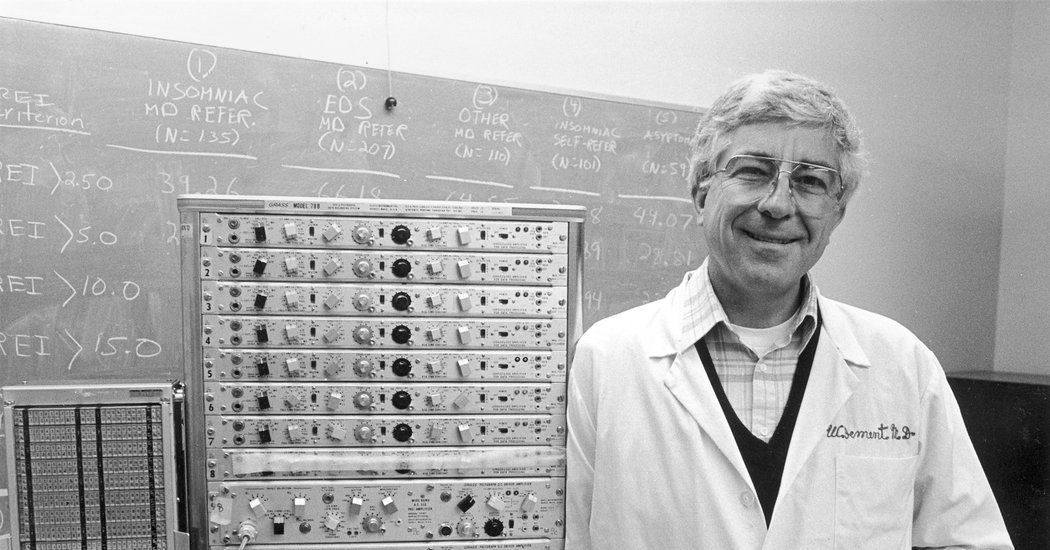 William Charles Dement was born on July 29, 1928, in Wenatchee, Wash., in the north-central part of the state, and grew up further south in Walla Walla. His father, Charles, was a tax agent and bookkeeper, and his mother, Kathryn (Severyns) Dement, was a homemaker.

After serving in the Army in postwar Japan, where he edited a regiment newspaper, he earned a bachelor’s degree in basic medical science at the University of Washington, Seattle, in 1951. He paid his way by working as a jazz bassist and hosted jam sessions on his houseboat.

Dr. Dement’s fascination with sleep began in medical school at the University of Chicago. He became intrigued with the work of Nathaniel Kleitman, a physiologist who was credited with doing pioneering research on sleep when the field barely existed. Dr. Kleitman and a graduate student, Eugene Aserinsky, first reported the discovery of rapid eye movement, or REM, during sleep.

“‘Dr. Kleitman and I think these movements might be related to dreaming,’” Dr. Dement recalled Mr. Aserinsky telling him. “For a student interested in psychiatry, this offhand comment was more stunning than if he had just offered me a winning lottery ticket.”

After joining Dr. Kleitman’s sleep laboratory, Dr. Dement filmed subjects in REM sleep — one subject, who was studying at the university, was the future writer, director and actress Elaine May — and studied the connection between REM sleep and dreams.

In measuring the brain waves and eye movements of nine sleeping subjects in 1956, Dr. Dement and Dr. Kleitman found a high incidence of dream recall when subjects were awakened five to 15 minutes after REM sleep had begun.