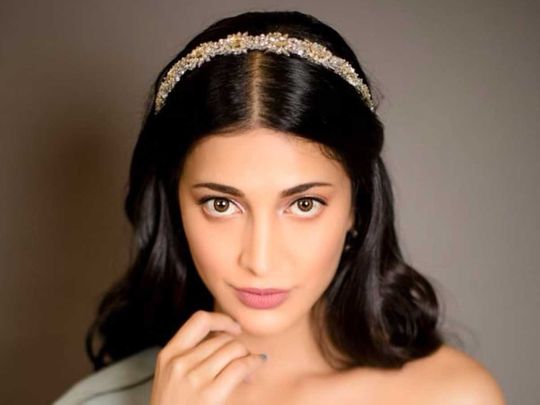 The daughter of veteran stars Kamal Haasan and Sarika posted a picture of herself from an underwater shoot, captioning it: “Water baby #throwback.

She also shared a photograph of her face, where she showed off her unusual birthmarks – in her eyes,

“Yes, those are birthmarks in my eye – no it’s not some weird reaction – no it’s not a disease- yes they get lighter and darker just like freckles – yes it’s very common- yes I have had them for years and years and I think they’re super special ?? and YES you should celebrate all the things that make you YOU, Shruti wrote.

The actress had earlier shared a glimpse from her “wild” Thursday night.

She posted four looks and made a collage out of it. In the first image, she can be seen staring at the camera, in the second image, Shruti is seen sporting a goofy look.

The third photograph has the actress making a fish face and in the fourth, the “Gabbar Is Back” actress is smiling at the camera.

“At home , oil in my hair , fancy ring light and fleeting thoughts and moods – THURSDAY NIGHTS are wild. I hope everyone is doing well and I hope you’re entertaining yourself and falling in love with yourself a little bit more everyday,” she wrote alongside the image.

Shruti made her debut in Bollywood in 2000 with the film “Luck”. She was later seen in Hindi films like “Dil Toh Baccha Hai Ji”, “Ramayya Vasthavayya” and “Behen Hogi Teri”.

In South, she has worked in hits like “Gabbar Singh”, “Yevadu” and “Puli” among others films. She will next be seen in Telugu movie “Krack” and “Laabam”, a Tamil film.