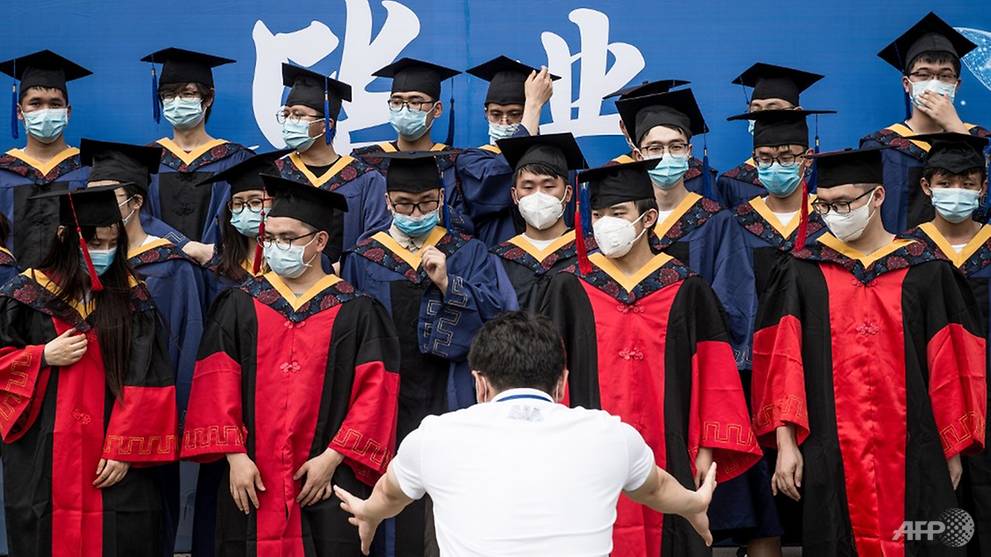 SINGAPORE: Spring, particularly the months of March and April, is usually the season for job recruitment in China, but things are not coming up roses for job seekers.

Job listings in China fell by about 27 per cent in the first quarter, a study from Peking University showed. Across China, unemployment in urban areas nudged up to 6 per cent in April.

The jobless rate for young people, or those aged between 16 and 24, however, was twice as high at 13.8 per cent.

The statistics do not bode well for job seekers such as Rizal Chandra. The Indonesian national is one of 8.7 million students graduating from China’s universities this year.

Mr Rizal, 22, is from Surabaya, Indonesia, and recently graduated from Beijing Language and Culture University with a Master of Teaching Chinese to Speakers of Other Languages (MTCSOL). He has applied for multiple jobs, and so far has received only rejections – about 20 of them.

“Many companies have completely stopped hiring and have retrenched many workers. It was demoralising.”

According to him, MTCSOL graduates typically take up teaching jobs, or work in multinational companies such as TikTok, Xiaomi and JD as translators.

After an unsuccessful job search, Mr Rizal decided to travel before resuming the hunt for employment, but then the COVID-19 pandemic broke and he was unable to return to Beijing in January.

“I feel like my dream of working in China has ended,” he said.

It is a story repeated in many places around the world.

“Start dates have been delayed. We are also seeing scenarios where candidates are taken on board as interns, as opposed to formal graduate programmes. Often, these roles have a lower level of remuneration.”

According to him, the market in Singapore is holding up reasonably well, compared with other Asian economies.

“If you look at other markets, Japan for example, graduate vacancies are down by down by 6 per cent,” said Mr Thompson.

READ: Commentary – COVID-19 could shrink earnings of 2020 graduates for years to come

Around the world, lockdowns have shut down economies. In the US, the unemployment rate is at its highest since the Great Depression.

Globally, the International Labour Organization predicts a loss of 305 million jobs in the second quarter of 2020.

But despite these bleak statistics, there are some bright spots for job seekers.

Rina Lee, director of digital and tech at Singapore-based recruitment firm 33 Talent, said that companies that are thriving are still hiring and even expanding.

According to her, the technology sector has not really been impacted by the pandemic. These include not just the e-commerce and video-conferencing solutions that have become a big part of many consumers’ daily routines, but also the companies that support them, such as logistics, insurance and financial technology.

There are also regional opportunities.

“Thinking about the ASEAN region overall, there continues to be a view that the region will further present itself as a supply chain hub,” said Mr Thompson.

“That is really significant on a global basis and so we still see demand for people with strong skills in supply chain management, procurement, and particularly the ability to influence and interact across different cultures and demographics,” he added.

As countries emerge from lockdown, there is a sense of cautious optimism.

33 Talent’s Ms Lee thinks that the initial fear and uncertainty brought about by the pandemic will recede as the situation improves and mindsets change. She is convinced that the job market will open up, surely but slowly.

Experts say until that happens though, job seekers should stay resilient to stay ahead.

“Use this crisis to upgrade yourself, volunteer, think of creative ways that you can expose yourself to different projects. The most important thing now is to gain experience,” said Ms Martinez.

“Don’t worry too much about the job designation or the salary. Just think about getting exposure, and think about working with companies that will give you opportunities to build your skills,” she added.

The ability to weather a crisis could also stand job seekers in good stead.

Back home in Indonesia, Mr Rizal isn’t giving up. He is now looking for jobs that will allow him to use his Chinese-language skills and experiences, to be a bridge between China and Southeast Asia.