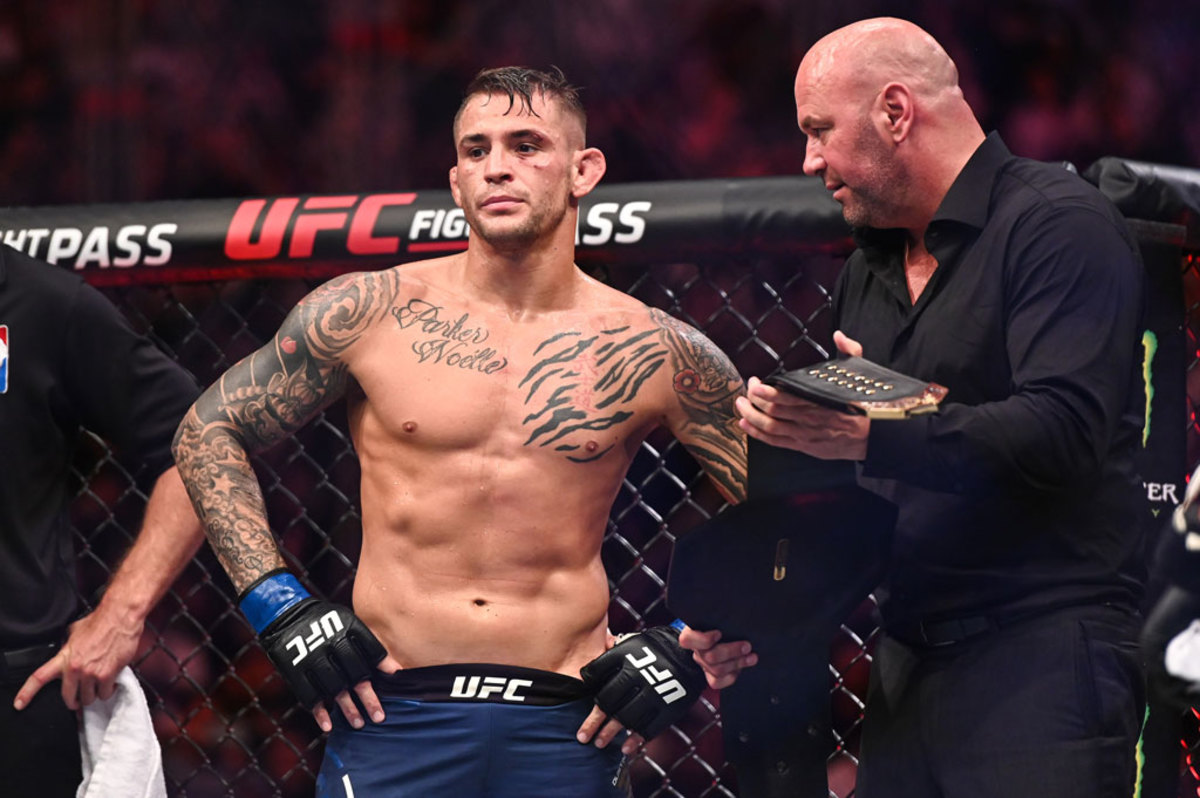 Last weekend, Josh Emmett and Shane Burgos threw down in what became a highly discussed front runner for fight of the year, Now, the UFC is back this Saturday, headlined by a fight that may quite possibly take those top honors.

UFC Vegas 4 on Saturday caps off a very successful run for the organization at UFC Apex, as it will be the final fight card from the Vegas facility, before heading off to Fight Island, which already has nine cards scheduled across the next two months. Saturday night’s card is slated for 10 matches, and is headlined by the return of Dustin Poirier, who takes on a contender on the rise, Aukland’s own, Dan Hooker. The night’s co-main event features the always entertaining Mike Perry, who apparently will be cornered by only his girlfriend, as he takes on submission artist Mickey Gall, whom you may remember as CM Punk’s first opponent in a fight that lasted just about two minutes until Gall choked him out.

The prelims kick off at 5pm ET, followed by the main card at 8pm ET. Here’s the details.

“The Diamond” Shines on Saturday Night

If Dustin Poirier isn’t booked, he’s actively looking to be one of the most active fighters on the roster.

With 11 years as a pro, 10 of which under the WEC/UFC banner, Poirier will be returning to the stage after the longest layoff of his career.

After winning six straight, he lost via third round submission to lightweight king Khabib Nurmagomedov last September. He took the time after the loss to repair a nagging hip injury which resulted in weeks of inactivity; unknown territory for the former interim champ.

After weeks of rest leading into physical therapy, Poirier was able to take a timeout from fighting, to spend time with his family, which gave him a great opportunity to put things into perspective. This included celebrating his successes and appreciation for the position he has been able to put his family in. Doing this can only make a fighter like Poirier hungrier for more, and I believe we will see that Saturday night when he makes his return.

His return won’t be a walk in the park by any means. Standing across from him will be a fighter on the cusp of title talks in Dan Hooker. Hooker is riding a three-fight win streak into this matchup, including a highlight knockout of James Vick. He followed that up with two decisions against tough opponents in Al Iaquinta and Paul Felder.

Hooker will have the size advantage with three inches of reach on Poirier. That’s coupled with a stellar 78% takedown defense, which will point to this match being on the feet the majority of the night. When looking at the historical statistics, you will find Poirier with advantages in all metrics across the board both standing and on the mat, with the exception of the takedown defense we’ve already mentioned.

A big key is Poirier’s Strikes Landed per Minute (SLpM) compared to Hooker’s past opponents. Poirier is elite in this area, and lands 5.51 SLpM while only absorbing 3.97, giving him a strike differential of +1.54. Hooker isn’t bad himself with 4.76 SLpM yet he gets hit just as much, giving him an almost even differential on his end. Not good. Considering these numbers, you have to look at the opponents that have led to the numbers themselves. In Hooker’s UFC career, he’s literally never faced anyone that throws the volume Poirier does. Take a look.

Now we look at who Poirier has faced. When looking at his last five opponents, the level of opponent in comparison to Hooker’s is just massive.

Poirier has faced either a current or former UFC title holder in his last six fights, which resulted in a no contest, four straight wins (three finishes), and his loss to current champ Nurmagomedov. That, my friends, is impressive.

As mentioned, this fight will predominantly be on the feet, and we should see Poirier’s technique and volume shine. It’s the fight game I know, and Hooker always has that puncher’s chance to clip Poirier, but that hasn’t happened in over four years, and only twice across 31 fights.

It’s also worth noting that Poirier’s travel for this fight is far less impactful than Hooker’s. Training out of City Kickboxing in Auckland, New Zealand, Hooker was only able to access the gym near the end of his camp, causing him to get creative in staying in shape. This was without knowing if he could make the fight with New Zealand under level-4 lockdown specific to the COVID-19 pandemic. Hooker eventually got his visa and will arrive in Vegas ready to go. It’s got to weigh on the mind though that after this event, he must turn around and head back home across the world, only to be quarantined for 14 days at some hotel. I’m exhausted just thinking about his trek.

A little fun fact in closing. Anyone who has beaten Paul Felder has lost their very next fight. Guess who just beat Paul Felder four months ago? Dan Hooker.

QUICK NOTES/PREDICTIONS ON THE REST OF THE CARD:

Mike Perry had no traditional training camp, and will have his girlfriend (with no fight experience), solely cornering him Saturday for the co-main. Can the gambling gods please let this get to the second round, and can the UFC mic up Perry’s corner? This will be amazing. As long as Perry avoids the submission attempts, I’m not sure how Gall can win.

Allen has been impressive since getting the call up to the UFC. He’s finished both Tom Breese and Kevin Holland since earning his contract last July on DWCS with a submission win against Aaron Jeffery on the show.

Allen will welcome newcomer Kyle Daukaus, the #1 middleweight out of Pennsylvania, who will be making his debut with the organization. Daukaus is 9-0, with eight wins via submission.

Daukaus is game and very crafty on the mat. He just may be the better striker, although lacking the power advantage. While the line should be closer here, I’ll side with the favorite.

Villante is 2-4 in his last six fights, and will be making the move to heavyweight for this matchup. Although he’s seen some success at heavyweight in the past (6-1), he hasn’t fought in the division since 2010. Regardless, Villante is very hittable, has little head movement and statistically absorbs more than he lands. Greene will be the more aggressive fighter and though he’s sloppy, his size and output should be a difference maker as Villante eventually slows down.

This is a short notice fight. Woodson is undefeated and looked great against Kyle Bochniak last October in a fight where he was a +130 underdog. Erosa on the other hand is 0-3 in the UFC, and a pink slip could be on deck. Would parlay Woodson with someone if I played parlays.

Pena’s 4-2 in the UFC and continues to improve. Worthy, as we saw last August, throws with intent; shocking Devonte Smith and putting him away in one round. He’s a kill-or-be-killed type fighter, and lacks some grappling, which will most likely be where Pena will take this.

Expect to see Pena get a piggy back ride and avoid the big shots from Worthy.

Interesting to see a heavyweight fight in a small cage with an over/under set at 2.5. Lins will look to box, while Boser will look to mix in some kicks, keeping Lins guessing. Boser proved his durability once again in his loss to prospect Cyril Gane. Boser will have the more volume in there along with cardio advantage. Both fighters will have their moments, but I’m going to take a position with Boser and look for him to land more across three rounds.

Sato is making his return against the debuting Ramiz Brahimaj.

Coming off a loss to Belal Muhammad, Sato is 1-1 in the UFC.

Sato is a very quick southpaw, is considered durable and recovers fairly well when in danger. 12 of his 15 victories have come by finish, with 67% by knockout.

Brahimaj is an elite jiu jitsu practitioner and if he can get this one down to the mat, it’s his world. This is definitely a striker vs grappler match up.

As long as Sato avoids the mat, watch for Brahimaj to slow on the feet, with a possibility that Sato lands a KO.

Zalal at 23 years old continues to improve, and will be visibly the better athlete in comparison to the veteran Griffin. I like the cardio and ability to mix in the leg kicks from Zalal here. He’ll probably land some takedowns and score some points as well, exposing the 35% takedown defense of Griffin.

Griffin is tough, and hasn’t been finished since 2014. I was going to make a play on Zalal, but the small cage will impact his ability to move in and out as much as he’d like. It’s a quick turnaround for Griffin so consider the two weight cuts in a short span.

We have another very short notice fight for Hansen and Frey.

At 20 years old, Hansen is 15 years younger than Frey, and both will be making their UFC debuts.

This will be the first fight for Frey in the strawweight division. Frey is the current Invicta FC atomweight champion, and will be the visibly better striker. That said, Hansen could take her down with the size, and Frey isn’t the best on the mat. No reason to push a bet on this one for me.

A couple of things I like to consider when playing MMA DFS:

A narrative for DFS players to consider going into his card is the UFC’s decision to roll with the use of its smaller, 25 foot octagon at the APEX, instead of the standard 30’ cage.

The use of the smaller octagon has historically increased fight finish rates, and shortened average fight times, due to the ability to create more action and engagement between the two fighters.

As mentioned in the tip sheet above, here’s my MMA DFS Heat Chart for UFC Fight Night.

The chart is ranked based on fight finish odds. Fight finishes are where the points are in MMA DFS. Take a quick glance at the stack, and we will break down the individual match-ups below.

Two key offensive metrics are strikes and takedowns. They get off on their opponents, so watch your points rack up quick.

Here’s my Offensive Output Meter for the card. With this chart, you can compare historical fighter averages in these two, key metrics as I rank all fighters participating Saturday.

Below you will find the striking differential for the card. Consider it a heat chart, those in red are “hotter” than those in blue “cold.”

Good luck everyone and I hope to see some of you cashing after Saturday night!