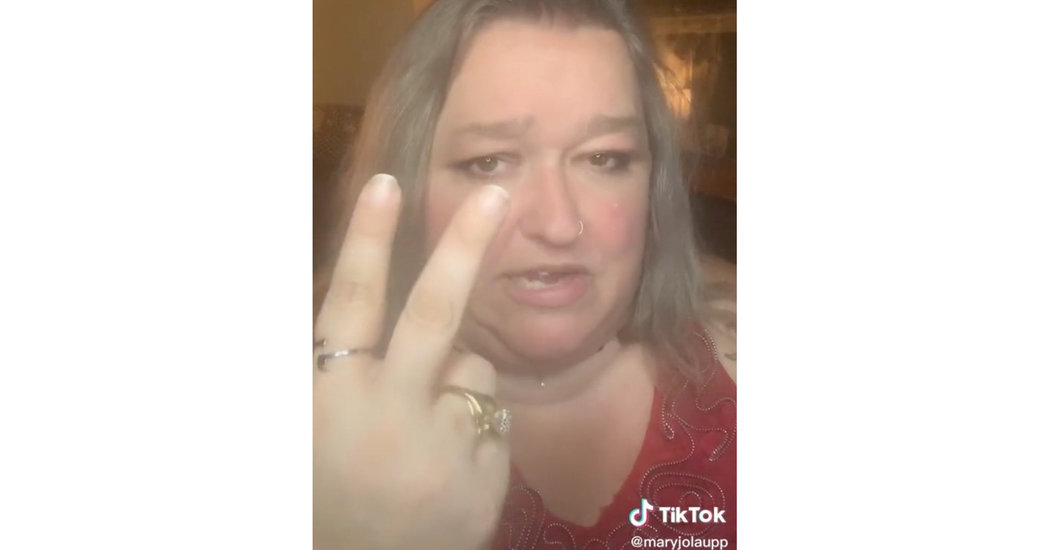 Last weekend, Mary Jo Laupp was enjoying a quiet night at a birthday party for her granddaughter — until she picked up her phone and her world flipped upside down.

A TikTok video she had made urging people to reserve tickets to President Trump’s June 20 rally in Tulsa, Okla. — and then not show up — had gone viral. Rally attendance had turned out to be far lower than billed by the Trump campaign, and TikTok teens and Korean pop music fans were taking a victory lap online. Ms. Laupp’s phone was blowing up with calls, messages and notifications.

Now Ms. Laupp, 51, who has become known as “TikTok Grandma,” has been recruited by the Biden Digital Coalition, a grass-roots organization, to put her TikTok skills to work supporting the presidential campaign of Joseph R. Biden Jr.

The coalition, made up of about 100 people — many of whom are alumni of other Democratic presidential campaigns — works to amplify pro-Biden messages and build engagement on social media. While it is not part of Mr. Biden’s campaign, it is in contact with Biden staff members. Coalition members, who are all volunteers, said they brought on Ms. Laupp for her ability to turn a viral moment into a call to action.

“Cleary, something she had done had worked out really well, so we wanted to harness that energy,” said Caitlin Gilbert, a coalition co-director.

Ms. Laupp, who works in the music department at her local high school in Fort Dodge, Iowa, said she was delighted to join the Biden group.

“The offer was completely unexpected, but I’m excited to be a part of a team that is embracing social media technology as a campaign tool,” she said on Friday.

She said her first task was to help build a “political hype house” for Mr. Biden, which is essentially a group of content creators on TikTok who will make pro-Biden videos and explore the viability of campaign organizing on the app.

“My platform has kind of become this bizarre gathering place for people who want to try to make change,” Ms. Laupp said. Young people are “absolutely energized and ready to go.”

Ms. Laupp, who has four children and six grandchildren, is an unlikely TikTok star. The entertainment app, which is owned by the Chinese tech company ByteDance, is known for its audience of teens and even younger viewers and for making celebrities of 16-year-olds. Ms. Laupp, who is married to a minister, first started using the app in May.

Raised in a Christian household in Michigan and a graduate of the conservative Cornerstone University, Ms. Laupp said she had become more liberal over time. In the 2016 presidential election, she voted for the Libertarian Party nominee, Gary Johnson. This year, she volunteered for Pete Buttigieg, the former mayor of South Bend, Ind., in the Iowa caucuses.

“When asked to name the greatest commandment, Jesus mentioned two — love God with everything you have, and love everyone else,” Ms. Laupp said. “As it stands right now, one party does a far better job in showing love, compassion and empathy than the other.”

Denise Aptekar, who also worked on the Buttigieg campaign, said Ms. Laupp was responsible for getting young people at her high school engaged with it.

“She called herself a most unusual Pete supporter given the conservative social circles she grew up in,” Ms. Aptekar said.

The inspiration for the viral TikTok video came from a friend, Ms. Laupp said. For years, the friend had staged solo protests against political candidates she disliked by registering for their rallies under a fake name and not showing up.

Ms. Laupp wondered what would happen if masses of people did the same for the Trump rally in Tulsa. So she made a video urging viewers who “want to see this 19,000-seat auditorium barely filled or completely empty go reserve tickets now, and leave him standing there alone on the stage” — and was “overwhelmed” by the response.

Some young people have been “clicking the daylights” out of Trump campaign ads on Facebook, she said, reasoning that the ads will expire after a certain number of clicks and cost money to be renewed. Others are loading up their digital shopping carts in the Trump campaign merchandise store and abandoning them in an attempt to temporarily reduce inventory.

One idea that gets “bounced around” quite often is another attempt at flooding a Trump rally with ticket reservations and then not showing up, she added. She said she was not sure the feat could be repeated.

“Can we really pull the same magic trick twice?” she asked.