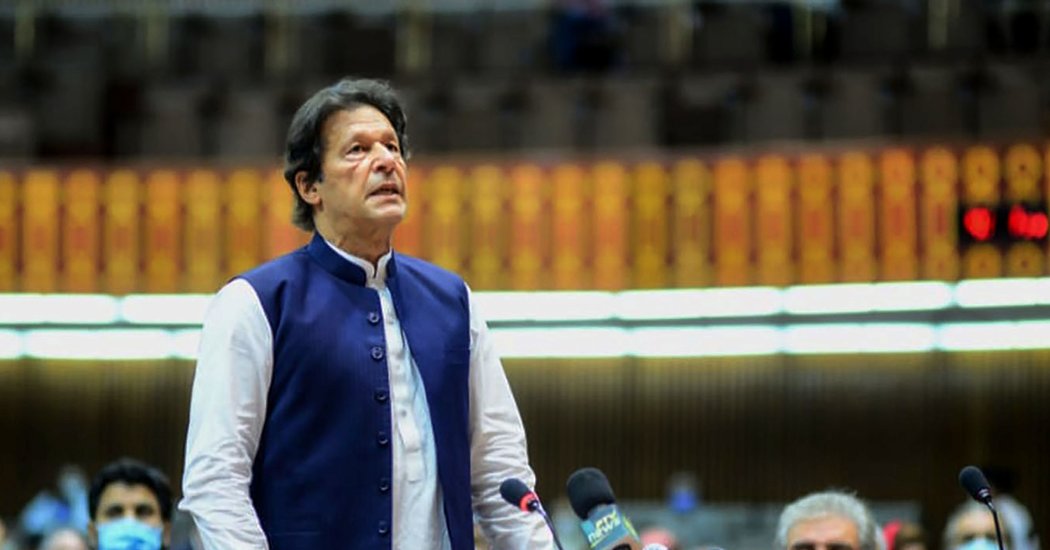 ISLAMABAD, Pakistan — Prime Minister Imran Khan of Pakistan was criticized by opposition lawmakers after making a speech to Parliament in which he said Osama bin Laden had been “martyred” by the United States when it killed the mastermind of the Sept. 11 attacks in 2011.

Mr. Khan was rebuked for his remarks, which included jibes at the United States, and for the reverence he showed Bin Laden by suggesting that he was a martyr, a term of veneration in Islam used to describe those killed defending the faith.

“We sided with the U.S. in the war on terror but they came here and killed him, martyred him,” Mr. Khan said in the speech on Thursday.

The prime minister at first said Bin Laden was merely “killed” by the Americans, but quickly corrected himself to say the leader of Al Qaeda was “martyred.”

The Americans, he added, “used abusive language against us” and further insulted Pakistan by not informing the country that they intended to enter the country to kill Bin Laden.

Pakistan, an antipathetic but important ally of the United States, has insisted that it did not know Bin Laden was hiding out in the northern city of Abbottabad, but American officials have long accused the country’s powerful military of providing a safe haven for militants.

Mr. Khan’s critics in the National Assembly were quick to condemn the prime minister, already under fire for his handling of the coronavirus pandemic and an economy in a nose dive.

“Bin Laden brought terrorism to our lands, he was a terrorist through and through,” said Khawaja Muhammad Asif, an opposition leader.

On Twitter, Bilawal Bhutto Zardari, chairman of the opposition Pakistan Peoples Party, said Mr. Khan had a “history of appeasement to violent extremism.”

Mr. Khan, a former captain of the Pakistan cricket team, reinvented himself as a religious conservative when he entered politics.

Many Pakistanis remain supportive of Bin Laden and some religious leaders talk of the Qaeda leader in glorifying terms. Mr. Khan has capitalized on his base’s anti-American sentiments and sympathy for militants, including the Taliban.

The 2011 raid that killed Bin Laden was highly embarrassing for Pakistan’s military and spy agency, and caused the relationship between Pakistan and the United States to reach a historic low.

Mr. Khan said on Thursday that his government had improved relations with the United States and the countries now had greater mutual trust.

There was no official reaction or clarification about the prime minister’s remark from his office on Friday, and senior officials seemed to want to get past the controversy quickly.

Shah Mehmood Qureshi, the Pakistani foreign minister, tried to brush off the prime minister’s comments when asked for his reaction by the local news media.

“It was such an all-encompassing speech. This is not a matter of debate,” Mr. Qureshi said. “Let’s leave it.”